Joshua Cheptegei's dream double triumph, more victory in the women's 10,000m and a She Cranes Commonwealth debut. This and much more in this wrap-up of Team Uganda at the Gold Coast 2018.

Joshua Cheptegei's dream double triumph, more victory in the women's 10,000m and a She Cranes Commonwealth debut. This and much more in this wrap-up of Team Uganda at the Gold Coast 2018.

Three gold, one silver and two bronze. Six medals. That, in summary, is Uganda's overall performance at the 2018 Commonwealth Games in Australia's Gold Coast.

The curtains were drawn on the global competition on Sunday, with Team Uganda having fielded participants in a number of events, including athletics, netball, boxing and badminton.

To put that into perspective, consider this: there were 71 participating nations. Of these, 43 featured on the medals table. Uganda was the fourth-ranked African team, behind South Africa (6th), Nigeria (9th) and Kenya (14th).

Let's turn the hands of time with this round-up of Uganda's journey over the course of 11 days of active sporting activity.

The opening ceremony was on Wednesday and netball team captain Peace Proscovia, who plays here club netball in England, was Team Uganda's flagbearer for this edition. 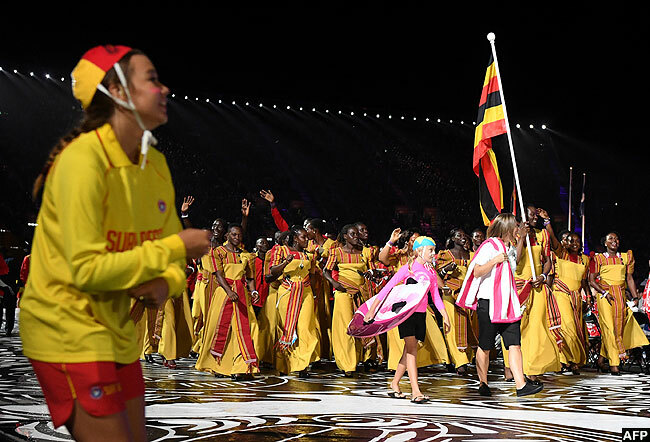 Weightlifter Julius Ssekitoleko, 17, kick-started Uganda's adventure, but he was only good for 10th place in the men's 56kg category. 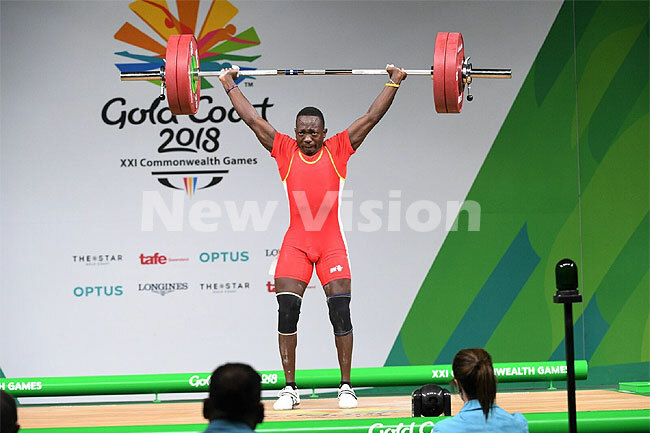 Next up, swimmer Ekirikubinza Tibatemwa, aged 19, finished second (27.17) in the men's 50m butterfly heat one. There were five heats, with the fastest 16 swimmers progressing to the semifinals.

Tibatemwa was not among them.

Ugandan attention then switched from the pool to the transparent squash court. Here, 29-year-old Ian Rukunya was up against Fiji's Stephen Henry in the men's singles Round of 64. The Ugandan won 3-0 to advance to the Round of 32. 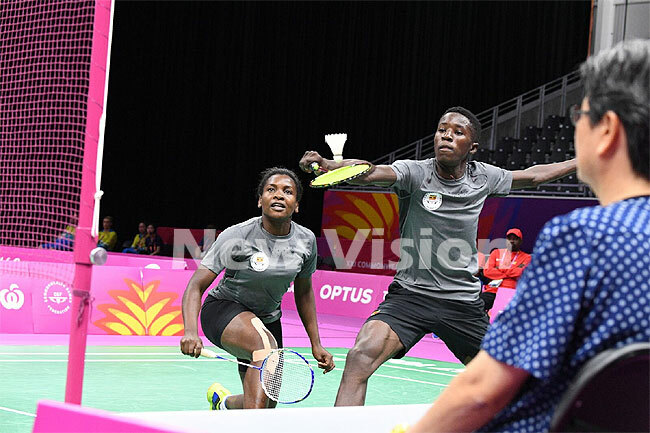 Meanwhile, it was a bright start for the squash team. Michael Kawooya beat Papua New Guinea's Madako Junior Suari 3-0 in Uganda's second men's singles Round of 64 to move on to the next phase.

Rukunya was back in action. But he was stopped in his tracks by England's Nick Matthew in the Round of 32.

His counterpart Kawooya would also fall to Daryl Selby of England at the same stage.

Time for some netball action. The She Cranes, playing at the Commonwealth Games for the first time ever, faced second-ranked New Zealand in Pool B of the preliminary round.

The Peace Proscovia-captained side put up a spirited fight but lost to the Silver Ferns 64-51.

Boxer Kavuma Ssemujju wrapped up Uganda's first day, but with a 5-0 defeat to England's Luke McCormack in the men's 64kg Round of 32. 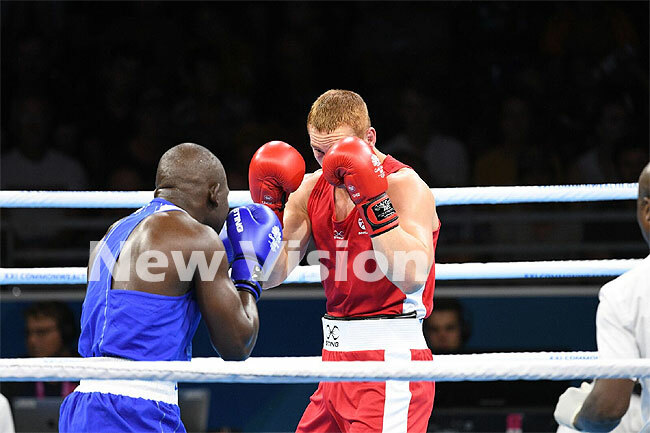 The duo of Brian Kasirye and Aisha Nakiyemba lost their second game in the badminton mixed doubles group stage - this time beaten by Australia's Ross Smith and Leane Choo.

Uganda's swimming script did not make for good reading at this point, as 23-year-old Avice Meya also failed to make it out of the preliminary round in the women's 50m freestyle.

Weighlifter Hakim Ssempereza was in the men's 69kg final, but he finished in 9th place.

Meanwhile, Ian Rukunya was again in squash action in the men's singles classic plate Round of 16. But he lost to Xavier Koeng of Mauritius 3-1.

Michael Kawooya was also in action at the same time in a different court. The 34-year-old was beaten by Sri Lanka's Ravindu Laksiri 3-0.

Having exited the freestyle event, Avice Meya was again not good enough for a semifinal slot in the women's 50m butterfly heats.

Respite soon came for Team Uganda, as the She Cranes narrowly beat Malawi 54-52 to brighten their chances in Pool B. 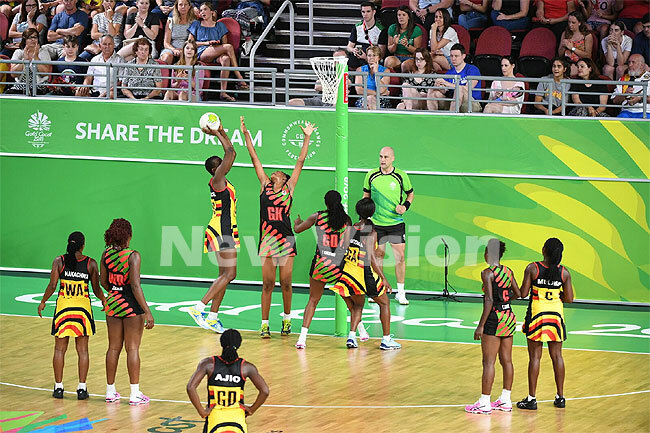 Boxer Bashir Nasir lost to Swaziland's Zweli Dlamini in the men's 56kg Round of 16, before weightlifter Irene Kasuubo finished in 10th place in the women's 63kg final.

Musa Bwogi lifted Uganda's hopes of claiming a medal in boxing after he beat Mauritius' Merven Clair in the men's 69kg round of 16 to advance to the quarterfinals. 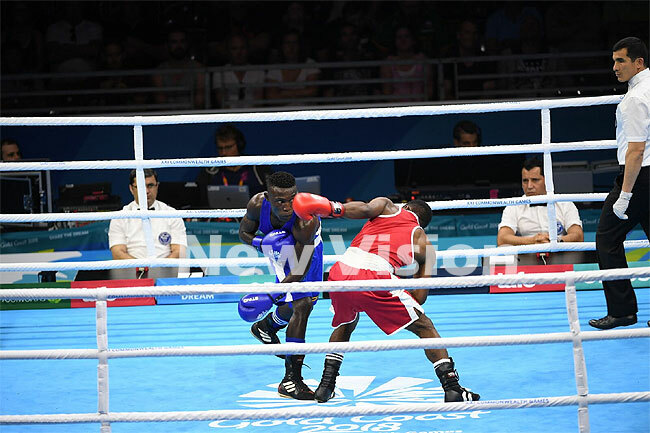 It was a below-par show for Ugandan weighlifting, with Kalidi Batuusa settling for 10th place in the men's 94kg final.

Focus turned to the Carrara Stadium track, where sprinter Scovia Ayikoru qualified for the women's 100m semifinal with a time of 11.86 in heat two.

In the men's category of this very event, Pius Adome's time of 10.70 in heat one did not help his cause of qualifying for the semifinal.

Away from the track, the netball team tasted another defeat inside the Convention and Exhibition Centre. This time against England (55-49).

After there, the rest of the day's Ugandan attention turned back to the track. Here, Alli Ngaimoko failed to go past Round One of the men's 400m. He produced a time of 50.35 seconds in heat three.

Teammate Leonard Opiny (47.32), running in heat four, did not progress too.

It was time for Uganda to feature on the medals table, when Joshua  Kiprui Cheptegei produced a fine performance (13:50.83) in the men's 5000m final to win gold - Uganda's first medal at this edition.

A golden day was, however, wrapped up by Scovia Ayikoru's failure to qualify for the women's 100m final. She did a time of 11.99 in the semifinals.

It was back to more track action and all the three runners in the women's 400m Round One progressed to the semifinals.

Again, the pieces were just not falling into place in the swimming department. Ekiribubinza Tibatemwa failed to make the cut in the men's 50m freestyle after clocking 24.93 in heat two.

Boxer Regarn Simbwa beat Nigeria's Lukmon Lawal in the men's 81kg Round of 16 to book a quarterfinal fight with Sammy Lee of Wales.

Winnie Nanyondo secured a place in the women's 1500m final after finishing second (4:08.49) in heat two.

It was a good way to wind up the day as Stella Chesang (31:45.30) and Mercyline Chelangat (31:48.41) emphasised Uganda's presence on the medals table by winning gold and bronze, respectively, in the women's 10,000m final.

Time for some table tennis action, shall we?

But it was never a good start. Ronald Nyaika lost 4-0 to Northern Ireland's Ashley Robinson in the men's singles group stage.

It was then mixed results in badminton. While Brian Kasirye beat Falkland Islands' Douglas Clark 2-0 in the Round of 64 of the men's singles, the mixed doubles was an opposite affair.

Pius Adome did not sprint further than Round One of the men's 200m. He did 21.39 seconds in heat two, failing to advance to the semifinals.

Another day of mixed results saw boxer Juma Miiro secure at least a bronze medal when he beat Kenyan Shaffi Hassan to advance to the semifinal.

Meanwhile, Edwin Ekiring beat South African Cameron Coetzer in badminton's men's singles Round of 64 to progress to the next phase. 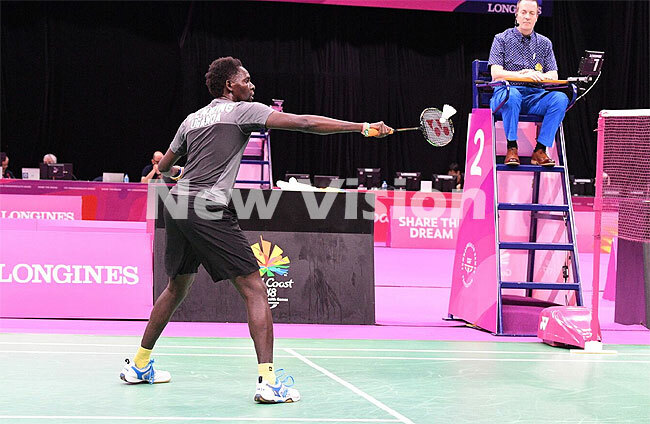 Elsewhere, boxer Musa Bwogi was defeated by England's Pat McCormack in the men's 69kg quarterfinals, before the She Cranes thrashed Wales 76-40 in netball.

In badminton, the pair of Brian Kasirye and Aisha Nakiyemba lost 2-1 to Fiji's Molia Burty and Gibson Karyn in the mixed doubles round of 64.

A women's 400m final place was not to be for Emily Nanziri and Leni Shida as the two did not run fast enough in their respective semifinal heats.

And finally, for the day, Winnie Nanyondo took part in the women's 1500m final. No podium finish, but she did a personal best time of 4:06.05 with a 10th-place finish.

It was never a good start here.

In the table tennis mixed doubles Round of 64, the duo of Ronald Nyaika and Halima Nambozo lost to Australia's Powell David and Miao Miao.

It was more defeat - this time in the badminton men's doubles Round of 32. Edwin Ekiring and Brian Kasirye could not overcome Matthew Bignell and Alexander Hutchings of Jersey.

In the women's javelin throw final, Josephine Lalam speared the shortest distance of 48.92 metres out of the eight athletes.

Her personal and season's best time is 50.4 metres. 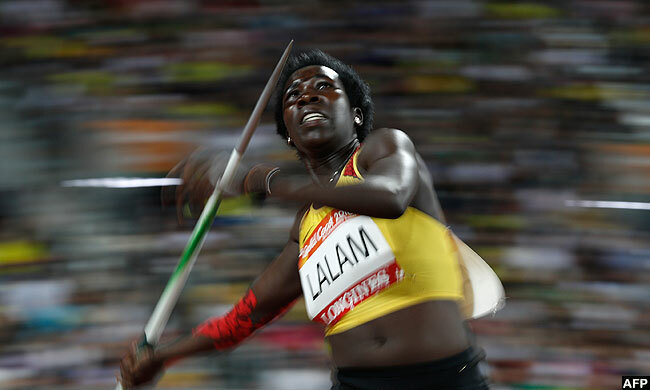 Later, the She Cranes reigned supreme over Scotland 57-37, but narrowly missed out on a place in the netball semifinals.

Edwin Ekiring then lost to England's Rajiv Ouseph in the men's singles Round of 32, before boxer Regarn Simbwa suffered a blow at the gloves of Wales' Sammy Lee in the men's 81kg quarterfinals.

After missing out on a place in the semifinals, the She Cranes had to play for a fifth/sixth place. They played against higher-ranked side South Africa, who beat them 53-42 to subject the Ugandan netball team to a sixth place finish.

Let's do some shooting. This may have come as a surprise, but yes, we had representation in the women's 50m rifle prone finals. Cleopatra Mungoma (pictured below taking her aim) took part, although she finished last - 20th place. 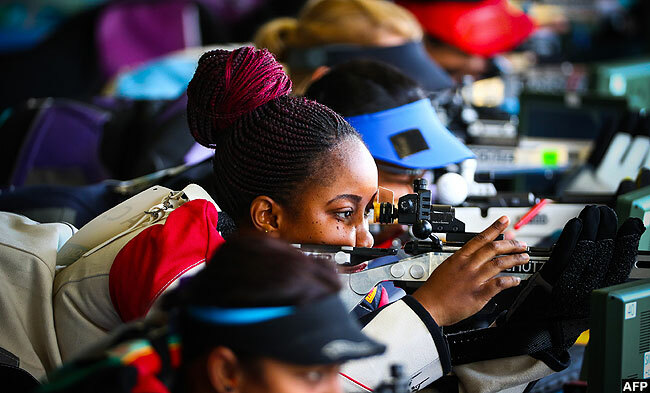 The day ended with badminton, with Brian Kasirye losing 0-2 to Chong Wei Lee of Malaysia in the men's singles Round of 16.

Friday started off with Ronald Musagala failing to progress to the men's 1500m final, crossing the line in a time of 3:48.62 minutes in heat two.

In boxing, Juma Miiro, who had hoped to win gold or silver, had to eventually settle for the bronze he had already secured after losing to India's Amit Phangal in the semifinals of the flyweight category.

Albert Chemutai would then go on to finish fifth in the men's 3000m steeplechase final with a personal best time of 8:19.89 minutes.

Joshua Cheptegei returned on the track for the men's 10,000m final determined to secure a dream double. And he did, producing the second-fastest time in the 10,000m history and a new Games record of 27:19.62 to win gold.

Jacob Kiplimo finished fourth with a season's best time of 27:30.25 while Timothy Toroitich (27:47.35) came through in seventh.

It was time for some rugby action - not the storyline Uganda had hoped for though: A 31-5 defeat to Wales in the men's Pool D started off Uganda's campaign at the Robina Stadium.

Uganda then lost 54-0 to Fiji, before wrapping it up with a 33-10 consolation win over Sri Lanka.

And finally, Uganda found the missing piece in the medals bag: silver. Solomon Munyo Mutai benefitted from twists and turns in the men's marathon to finish second with a time of 2:19.02.

Alex Chesakit was seventh with 2:23.06 while Robert Chemonges did not finish the run.

Overall, it was a successful outing for Team Uganda.

Thousands of lives impacted by MTN MoMoNyabo Together promotion