Uganda's netball team captain Peace Proscovia once again impressed despite her side losing their first game to New Zealand in the opening match of the 2018 Commonwealth Games on Thursday.

The Silver Ferns, ranked second in the world, beat the Ugandans 64-51 -  but they had to dig deeper to grind out the points.

It was the She Cranes's first ever match at the Commonwealth Games, and they made a good account of themselves in front of a sparse but vociferous crowd inside the stadium.

Despite the defeat, 7th-ranked Uganda showed just how much potent they carry when, at the end of the four quarters, registered better shooting (88%) than New Zealand (81%).

In truth though, losing by a goal margin of 13 against one of the best sides on the globe will have been seen by the Ugandan camp and several other observers as honourable. 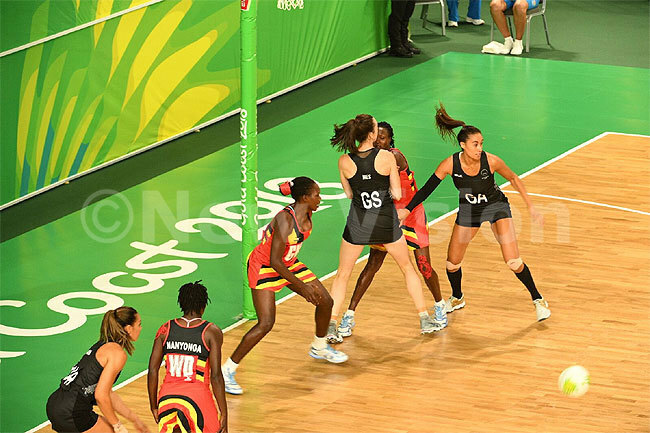 New Zealand burst out of the blocks with a 15-10 lead in the first quarter, before returning to maintain the gulf in the second quarter: 17-12.

The game's midpoint had the Silver Ferns leading 32-22.

The final two quarters were close: thanks to goal shooter Proscovia's lanky presence under the opposition's net, She Cranes managed 15 goals against New Zealand's 17 in the third quarter.

Quarter four also close, but with the Ferns having the edge: 15-14.

Overall, it was an encouraging start for the Ugandan representatives in Gold Coast.

England lead Pool B with two points, followed by New Zealand with also two points. Uganda is in third, Scotland in fourth.

Mali and Wales follow in fifth and sixth, respectively.