The First Lady and Minister of Education and Sports, Mrs. Janet Museveni, welcomed the Rotary International President, Dr. Jennifer Jones, to Uganda and acknowledged the valuable work the Rotary family does across the globe and, especially, in Uganda.

The Rotary International president, who is on a nine-day visit to Uganda, paid a courtesy call on the First Lady at State House Nakasero on Wednesday.

She was accompanied by her spouse, Rotarian Dr. Nick Krayacich, and a delegation comprising of past Rotary International vice presidents, Olayinka Babalola from Nigeria and Dean Rohrs from Canada.

Mrs. Museveni said it is an honor to have the Rotary International president visit Uganda and that it is motivating to hear about the work that the Rotary organization does across the globe.

She asked the Rotary International president to consider partnering with the Office of the First Lady of Uganda in a campaign that she is championing across the country to stop teenage pregnancies and teach young people how to avoid catching HIV/AIDs and getting pregnant prematurely.

She explained that this is a big challenge in the country, which was escalated by the First Lady (seated, center) with Jones (seated, third-right), her spouse Krayacich (second right), and other Rotary senior officials at Nakasero on Wednesday during the COVID-19-induced lockdown.

Mrs. Museveni also welcomed possible support and partnership from the Rotary family in the effort to remove children living on the streets, whose numbers have been increasing throughout the country.

She added that the children need to be skilled so that they can begin to work, earn a living and become self-reliant. 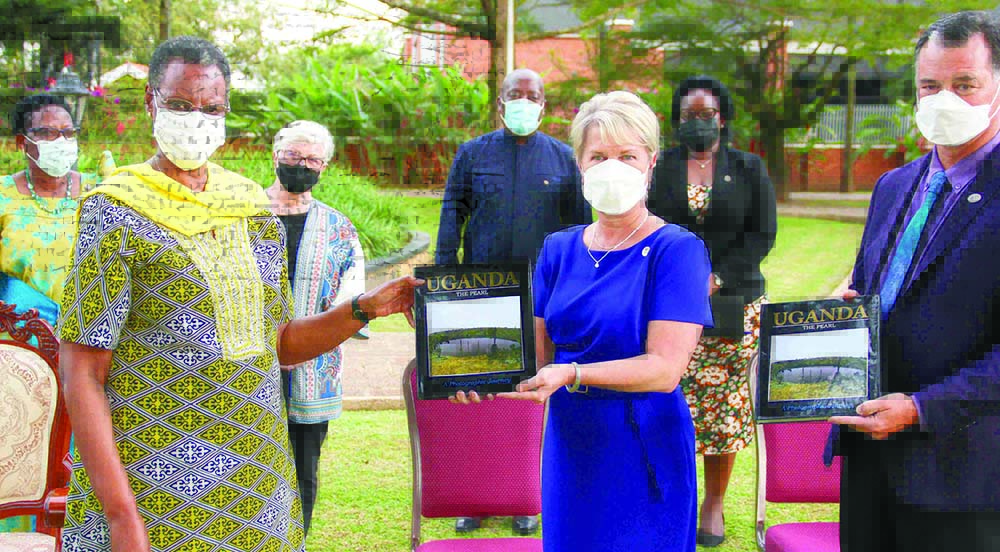 The First Lady (seated, centre) with Jones (seated, third-right), her spouse Krayacich (second-right) and other Rotary senior officials at Nakasero

Jones, a Canadian national and the first female president of Rotary International in its 117 years of existence, said she is on a tour code-named the Imagine Impact Tour.

She said she came to Uganda with more than 48 international guests, including top-level journalists, social media influencers, and other notables, who will help tell the world the story of what Rotary is doing to make a lasting change across the communities in Uganda.

She expressed pleasure at being in Uganda to share the story of what the Rotary family members in the country, who she described as true champions and people of immense integrity, are doing for the communities.

She said the tour will help uplift and raise awareness about the Rotary Peace Centre at Makerere University, which is the first in Africa.

She described the peace center as the beginning of hope for many because it trains valuable professionals in a variety of vocations, who will bring integrity to peace and conflict prevention.

Every year, the Rotary Peace Centre at Makerere University trains 80 students from across the world who later become peace ambassadors.

Jones also talked about other areas of focus of Rotary International, including the eradication of polio and the elimination of malaria.

She assured the First Lady that maternal and child health is one of the areas of focus for the organization and that further dialogue will be held on the initiatives to curb teenage pregnancies and street children in Uganda.

She said Rotary International is a global network of 1.4 million people in more than 200 countries. She added that the number of young Rotarians is growing day by day and that they can be change-makers and leaders of their communities now and in the future.

The former district governor and the chairperson of the organizing committee of the visit of the Jones to Uganda said Rotary has been in Uganda since 1956 and has carried out life-changing projects and programs.

Among the achievements he highlighted were the Cancer Institute and Uganda Heart Institute, which were started by Rotary and are currently run by the Government. He added that Rotary recently built a modern cancer center at St.

He said the blood banks at Mengo Hospital and Francis Hospital, Nsambya, and Nsambya, have reduced the number of people dying from lack of blood from 27% to 11%.

“Our dream is to make sure that no one dies because of a lack of blood,” he said.

He thanked the Government for being a great partner in many areas and for providing the peace and stability that are so critical.

He pledged the Rotary family’s commitment to ensuring that life is better for the less privileged in Uganda.