A businessman has burst into tears before the army court while testifying about his kidnap by armed men who robbed him sh135m and dumped him in Kassanda in a forest.

Herbert Deus Muwayire, the proprietor of Praise distributors dealing in the distribution of Uganda Breweries products, was before General Court Martial in Makindye where he told the court about his kidnap by men in army uniform who pretended to be CMI operatives.

On the fateful day of October 10, 2018, as he left his home in the morning for work, he was stopped by men in uniform armed with batons who told him they were officers from the Chieftaincy of Military Intelligence (CMI), and that he was wanted at Kajjansi police station over murder charges.

This happened About 40kilometers away from his home. Muwayire, led by Lt Gift Mubehamwe, told the court that the men ordered him to lower the car screens, which he declined, and they started banging and breaking them down to get to him.

Muwayire narrated to the court: "They dragged me out of my car and put me in their car, a Toyota Premio UAX 592H, and drove away to places unknown to me."

While driving, the kidnappers tied Muwayire with a rope and laid him down in the car, stepping on him and asking where the money was. He added that while the car was moving, he noticed that the kidnappers were communicating with the driver of his car, confirming seeing the money in the car. 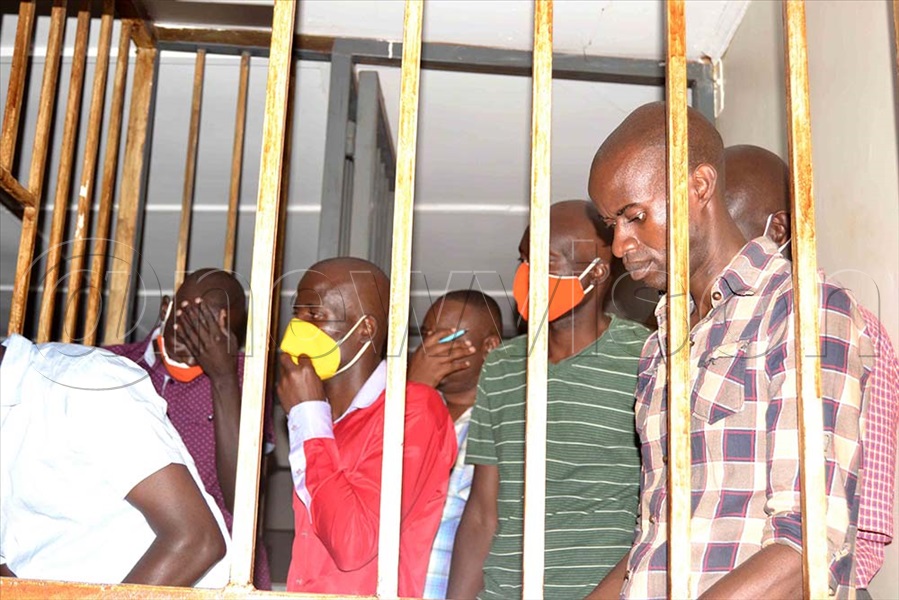 The aggrevated robbery suspects being alligned in court martial where they are to face trial. (Photo by Margret Zalwango)

“Along the way, I noticed they had taken a different route, not going to Kajjansi police as they told me upon arrest." I was trying to shout but they slapped me, beat me on the neck, and used batons to hit my ankles” Muwayire whose voice was filled with agony told the court.

He added that the kidnappers tied his body by folding the head to his feet, stockings packed into his mouth, and the shirt tied over his head were driven and dumped in a forest without any help. While crying, Muwayire told the army men that he begged the kidnappers not to let him die in pain

While dumping him there, the kidnappers had agreed to pour oil in his ears, but one of them stopped them, saying he has children and a wife who should see him before he dies.

Muwayire was able to identify four of the accused before the court, telling the court that before blinding off his eyes, he had noticed them and their voices.

From the forest, Muwayire struggled for his life until he uncovered the face and untied the hands. Later, he was able to move to the road, where he randomly stopped cars.

“The cars stopped but whenever I told them that I was robbed, they just drove off saying am a robber too” Muwayire added in tears.

It was a man in a double cabin who offered to take Muwayire to a nearby Kakungube police station, where he was taken to a clinic for first aid, then to Mubende Hospital before being transferred to Mengo Hospital for further treatment.

Muwayire told the court chaired by Brig Gen Freeman Robert Mugabe that his life has never been the same because he has been in and out of hospitals for various illnesses since the kidnap.

The case was adjourned to August 23, 2022, for further hearing, and the accused was further remanded to Kigo government prison.

The accused include Private Isma Mutebi of the Reserve Force, Festo Tumushabe, a businessman of Bulenga village, Habib Lwasa of Kasubi Zone 111, James Eyebu alias Afande Kerekere, a salesman and driver at Romis Wine Company in Bunamwaya, Richard Karungi, a resident of Kavala Zone in Kampala, and Disas Tugume, who was a cashier at Muwayire’s depot.

The prosecution alleges that the accused and others still at large on or around the 10th day of October 2018, while at Bwebajja village in Kajjansi town council in Wakiso, robbed Muwayire of cash of Sh135m, a motor vehicle number UAW 169N double cabin, a wrist watch, and two infix phones.