Raising a child with a chronic medical condition can be depressing.

Nicholas and Diana Tayebwa have learnt to help their 11-year-old daughter Elizabeth Birungi to navigate through life.

She is battling diabetes.

They spend sh400, 000 monthly on insulin and sh45, 000 weekly on testing kits. They also buy glucose tablets, fruits and snacks among others.

Birungi was a normal child

A few weeks before Birungi was diagnosed, the couple had noticed that she was losing weight even when she was eating well, playing well and doing house chores with no bother.

She did not complain of any pain or sickness. 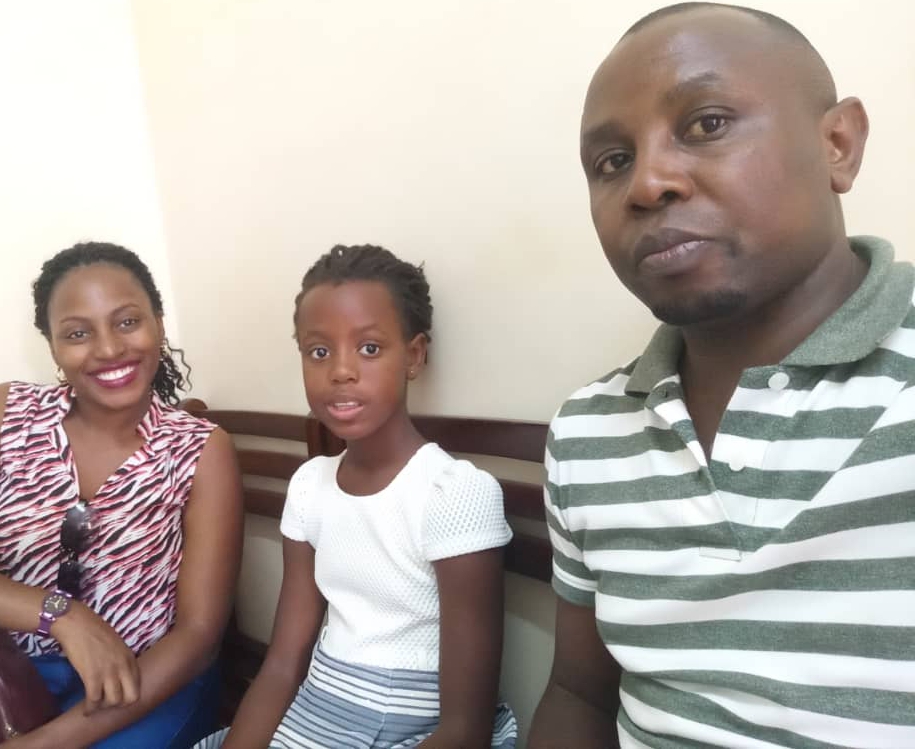 Birungi (centre) with her dad and cousin at the hospital

“We would on several occasions comment on her weight loss but just stop at that,” she says.

They thought she was just growing up.

Shortly after, Birungi developed a dry cough. At the hospital, she was given an anti-allergy and cough syrup which didn’t help much because the cough persisted.

They took her back to the hospital twice in vain.

Birungi would fail to wake up to prepare for school, saying she did not have energy.

“I would nag her to stop being lazy. She would drag herself to the bathroom, to the table and school,” she recalls.

Fast forward, on October 13, 2019, Birungi became weaker at school. The nurse gave her glucose. The next day, she still complained about a lack of energy.

Her dad convinced her to go to school but he was called after to take her to the hospital.

Nicholas took his daughter to a clinic where tests showed that she was highly dehydrated.

She was put on a drip. Her sugar levels were very high at 22 mmol/L. Normal sugar levels should between 4.5-7.

She was admitted to Nakasero hospital where further tests showed that she might be diabetic. They immediately put her on insulin but they had to run a confirmatory test; HB A1C while monitoring her for four days.

“Her HB A1C was at 9.8 yet for a normal person should be below six. This confirmed that she was diabetic,” Diana says.

Nicholas feared to break the news to his wife who was then in the UK. Birungi told her.

“It was a bombshell. My mind was jammed with questions. How on earth could a nine-year-old be diabetic?” she remembers.

Nicholas explained to her that their daughter had Type 1 diabetes.

It is an autoimmune disease where the pancreas stops producing insulin by itself, meaning that the body can’t control its sugar levels. One has to get insulin by injection.

“This condition is scary and the responsibility can be demanding,” she shares.

Diana’s mind quickly stressed over injecting her daughter daily. From that, she worried about the diet and how to get the right care at school and home.

“I explored the internet but the information was overwhelming. The more I read, the more I lost my head,” she recalls.

“When I returned, I did not know where to start from, but my niece who had been with Birungi in the hospital had to teach me a lot of things,” Diana remembers.

The first days at home were very hard. They had to strictly follow the meal plan which contradicted Birungi’s tastes. For example, she would be tempted to take a whole apple yet the meal plan showed quarter.

“We also gave insulin at every moment and measured the sugar levels while making records,” she recalls.

The couple bought a glucometer, stocked insulin and injecting pens.

Diana says that they had not heard of any diabetic cases in their families. Friends and family would recommend solutions some of which were misleading.

They visited several doctors but all tests confirmed their fears. They had to accept and move on.

“I almost broke down physically and emotionally,” she says.

However, the couple is now focused on the positive. They don’t look at the dark side of their daughter’s condition.

To them, diabetes is not a limiting factor to Birungi’s future. It can’t stop her from living a full life.

They encouraged her to listen to her body to know if the sugar levels are dropping or rising.

“It was tough managing the emotions. Everything or comment made her cry,” she recalls.

Birungi kept on wishing she was like other children. Getting used to injections was another challenge. Before the diagnosis, Birungi and Diana feared injections.

“The first time to inject her, my hands shook badly and my heart raced,” she remembers adding, “But she quickly got used to the jabs. She now does it on her own.”

Birungi draws blood to measure the sugar levels before injecting herself. She also counts the amount of carbohydrates in her food to know the amount of insulin to give.

Meanwhile, the couple took their daughter through a tough talk to accept her condition.

“She would ask when the injections would stop. We told her it was for the rest of her life until a cure is found,” she reminisces.

There were frequent meltdowns and resentment. They allowed her to express her anger. She would always burst out in tears.

“We would just look at her not knowing what to do. I would also cry until I grew strong to encourage her,” Diana remembers.

The family also had a temptation of bringing sweets for their youngest son who loves them. They feared for Birungi to see them yet she couldn’t have them.

However, along the way, they learnt that she can eat anything as long as she gets insulin.

Diana says they also learnt that meltdowns are one of the side effects of insulin. It makes someone emotional.

“She still does things she enjoyed before like swimming and playing,” she says.

The couple has managed to cope thanks to family support and being open about their daughter’s condition. The more they talk about it the better they heal.

“Nicholas is so supportive. He wakes up in the night to measure her sugar levels and give her a snack where necessary,” Diana applauds.

She also got in touch with parents of diabetic children who encourage and guide her.