MTN Uganda, has yestrday restored 50 hectares of forest cover in the Arua-based Enjeva Central Forest Reserve, as the company rolls out its reforestation project that will see 220 hectares restored across the country.

Enjeva CFR in Arua district becomes the third forest to restored by MTN under its “Uganda is Home” campaign that symbolises MTN’s deepening of its roots in Uganda, a country that has been home to the company since 1998. The campaign is a precursor to MTN Uganda’s listing of 20% of its shares on the Uganda Stock Exchange, an opportunity for Ugandans to own a part of the company.

The MTN reforestation project that is being undertaken in partnership with the National Forestry Authority (NFA) is but one of the many Corporate Social Responsibility initiatives that the company has undertaken over the years to strengthen its relationship with a country that it calls home.

The Enjeva CFR restoration project in Arua was launched by Ibrahim Senyonga, the MTN Enterprise Business Unit General Manager and Hon. Grace Freedom Kwiyucwinyi, the State-Minister for Northern Uganda accompanied by the local leadership from the region as well as officials from the National Forestry Authority (NFA) at Enjeva CFR today. 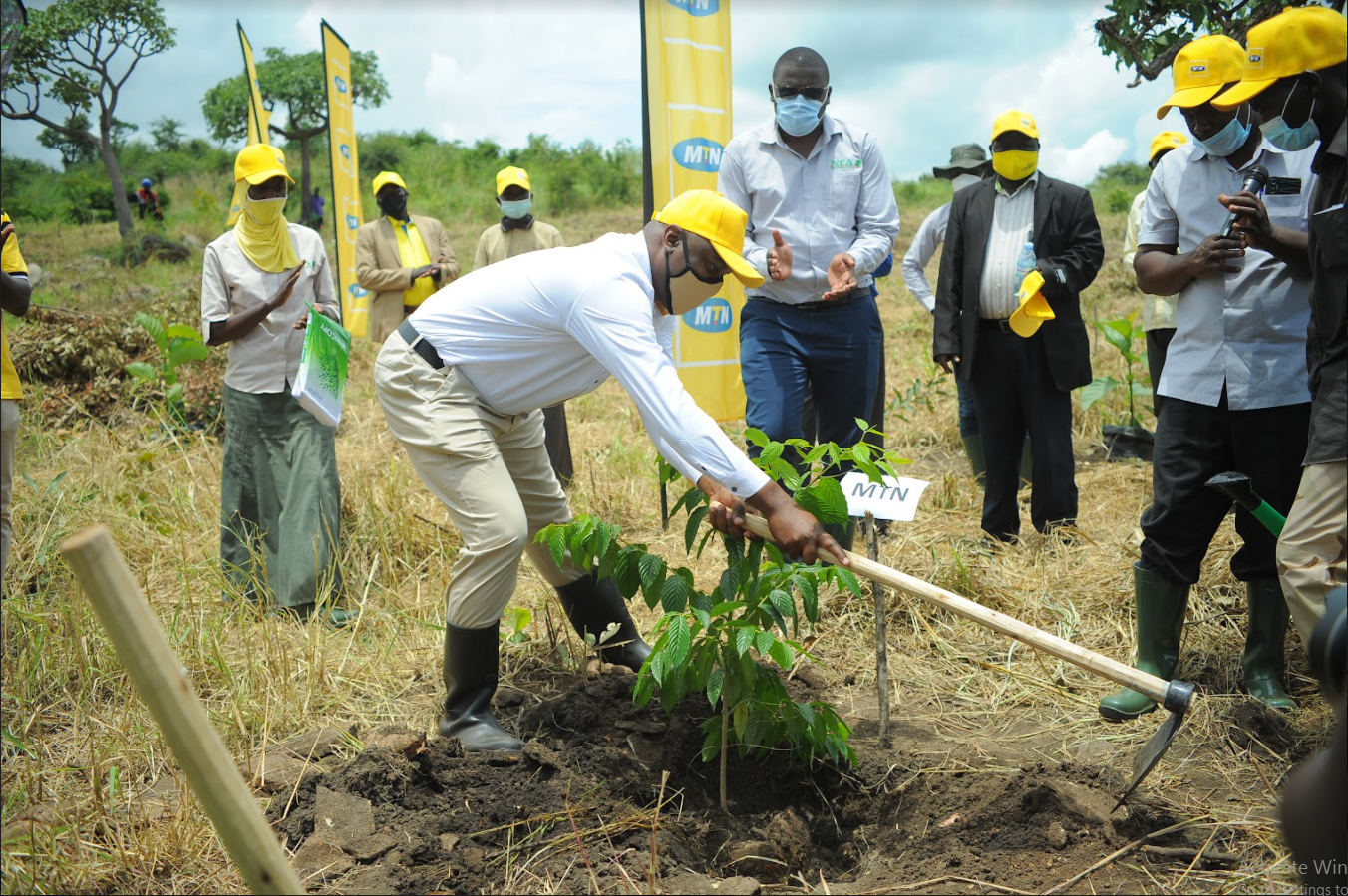 In his remarks, Senyonga alluded to the fact that MTN Uganda has over the years established its roots in Uganda and that the reforestation project was purely a symbolism of the company deepening its roots in a country that has become home to the company that is preparing to list 20% of its shares on the Uganda Stock Exchange.

“When the government of Uganda granted us a second operating license in 2020, part of the agreements was that MTN would list on the Uganda Securities Exchange, which will give Ugandans an opportunity to become share holders in a company that has and continues to find a good home in Uganda,” Senyonga said.

Senyonga further added that MTN and Uganda have had a good relationship spanning 22 years and counting, as such the company looks forward to having Ugandans own stake in MTN.

“It is against this background that we have launched the MTN ‘Uganda is Home’ campaign as we embark on this monumental journey for Uganda as MTN. That is why we chose to symbolically demonstrate MTN’s deepening of its roots in the country through restoring 220 hectares of forest cover across the country as our sign of commitment to the people of Uganda,” Senyonga said.

In her key note speech, Kwiyucwinyi said that MTN’s commitment towards the people of Uganda and particularly Arua has over the years built a strong bond between the people of Arua and MTN.

“Let us together thank MTN for the tremendous work they have done not just in Arua but across the country. MTN is a true definition of a corporate citizen worth applauding,” Kwiyucwinyi said.

She warned against the negative effects of environmental degradation such as drought, heavy rainfalls and poor crop yields which affect the livelihood of people and further lauded MTN for undertaking a project that is essential to human survival, noting that it was representative of MTN’s value to the people of Uganda.

“The ‘Uganda is Home’ campaign has come at a time when government is accelerating efforts such as reforestation among others to mitigate climate change. So, this is an insightful project by MTN,” Kwiyucwinyi said.

According to NFA, the decision by MTN to invest in forest restoration though a reforestation campaign is indicative of the value the telecom attaches to both the environment and the people of Uganda.

To MTN, undertaking CSR initiatives, such as the reforestation drive, is a commitment by the company to play its part in the development of its home, Uganda, as envisaged by MTN’s business model that suggests that businesses can only thrive when the communities within which they operate are thriving.

To this effect, MTN has over the years engaged in multiple CSR initiatives in the areas of education, health, sports, music and arts among others as a way of supporting communities to thrive in order to create a win-win situation for both the business as well as the citizens of Uganda through its corporate social responsibility arm, the MTN Foundation.

In 2019. MTN Uganda renovated and reequipped Aroi Health Center 3 in Arua as a way of boosting government’s efforts in improving maternal health. The telecom equipped the facility with hospital beds, mattresses and linens in addition to running water, solar lighting and a sanitary placenta pit to champion safe delivery for mothers in the region.

In the same year, MTN donated a new state-of-the-art blood refrigerator to the Arua Regional blood bank to solve the issue of blood shortages caused by inadequate blood storage refrigerators. The Arua Regional Blood Bank serves 3.38 million people including 815,000 from South Sudan living in the 9 districts of West Nile that were all faced with a challenge of blood storage.

In terms of sports MTN is the official sponsor of Arua’s flagship team in the Startimes Uganda Premier League, Onduparaka FC. MTN has sponsored the west Nile based club since the 2017/18 season and early this year, MTN committed to sponsoring the club for the 2020/2021 season.

The above initiatives, including the reforestation drive, demonstrate MTN’s long-term commitment as a responsible corporate citizen in Uganda over the years.

The “Uganda is Home” campaign comes shortly after MTN Uganda hit a milestone of 15 million subscribers, further deepening its roots in the country as the leading telecom company of choice.

MTN is committed to investing further to serve its ever-growing customer base diligently and to supporting the government’s efforts towards the socio-economic development of the Uganda.