Health minister Dr. Jane Ruth Aceng makes an appearance at Green Hill Academy in Kampala to witness her daughter, nephews and nieces get vaccinated against measles-rubella.

Health minister Dr. Jane Ruth Aceng makes an appearance at Green Hill Academy in Kampala to witness her daughter, nephews and nieces get vaccinated against measles-rubella.

(Scroll down for earlier updates)

In Hoima, the Kabalega Rally, which is the sixth round of National Rally Championship, gets under way today (October 17-20), Four activities, including karting, a vintage car show and drifting will be part of the event. 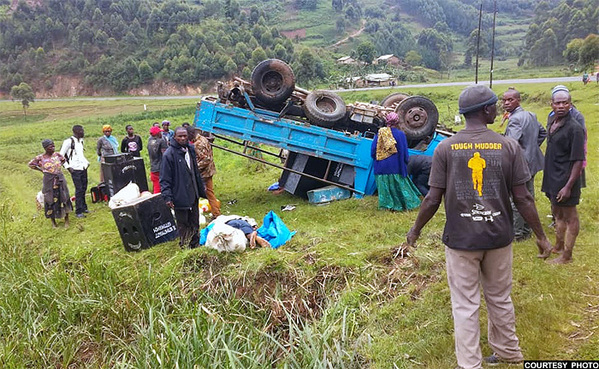 One person was killed and four got injured when a truck swerved off the road trying to avoid a head-on collision with another vehicle in Rubanda district in western Uganda.

According to Kigezi region Police publicist Elly Maate, the accident happened at a spot in Kagoye village, Nyarurambi parish in Muko sub-county.

At around 10.50am Thursday, the driver of the Isuzu truck, a one Vianney, apparently tried to overtake a bus, only to realise there was a vehicle fast approaching in the opposite direction. Panicked, while trying to avoid the crash, he found himself swerving off the road and tipping down the hilly stretch. 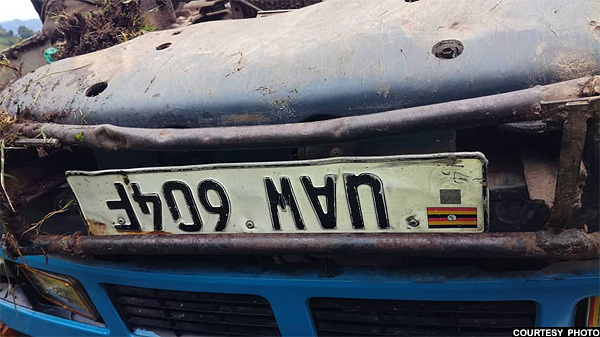 Maate said Police visited the scene, and the injured taken to to Muko Health Centre III for medical attention, before being later transferred to Mutolere Hospital in Kisoro district.

He said a postmortem examination of the body was done and the ill-fated vehicle towed to Police for inspection.

The driver is on the run. Preliminary cause of accident, according to Police, was reckless driving.

Investigations are under way.

Minister of Health, Hon @JaneRuth_Aceng ensures that her daughter, Michelle is immunized against Measles Rubella during the ongoing #MRCampaign19.
Also among immunized children at @GreenhillUg were the Minister's nieces and nephews. The vaccine is safe, effective and efficacious pic.twitter.com/fWpaHXrHlE 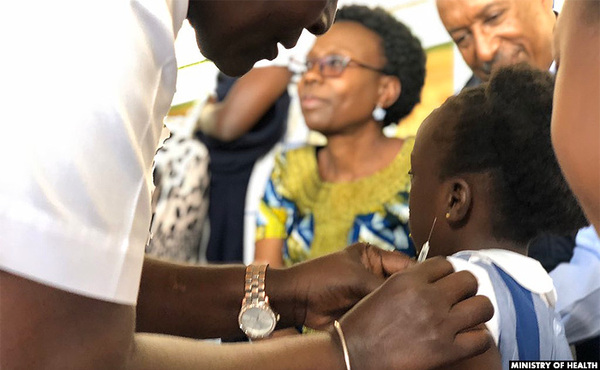 Michelle, the daughter of health minister Dr. Jane Ruth Aceng, has been vaccinated against measles-rubella at Green Hill Academy in Kampala. 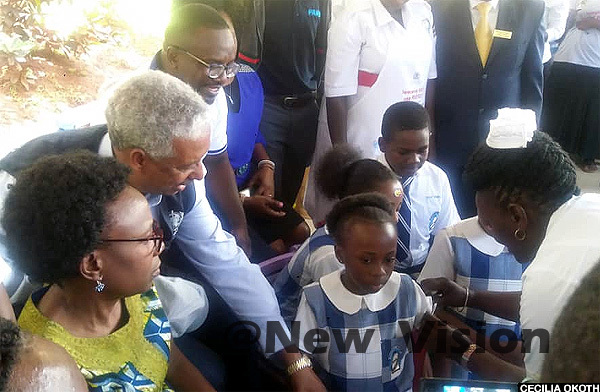 By Timothy Murungi at Parliament:

The representatives of the artisanal miners have reported how the army and Police not only laid to waste every structure in the mining area, but also confiscated all their belongings.

Jacob Mutabaazi (pictured below speaking on the right) says he was evicted from his permanent house that is now being used by the "Mining Police" as its 'headquarters'.

Mutabaazi says he negotiated to live with the security operatives but had to surrender his house after he was allegedly put on gunpoint by one of the soldiers who inquired "what are you still doing in this house?".

He tells the natural resources committee that his 20 houses that he used to rent out as lodges were demolished by the army, adding that his homestead has been turned into a garrison. 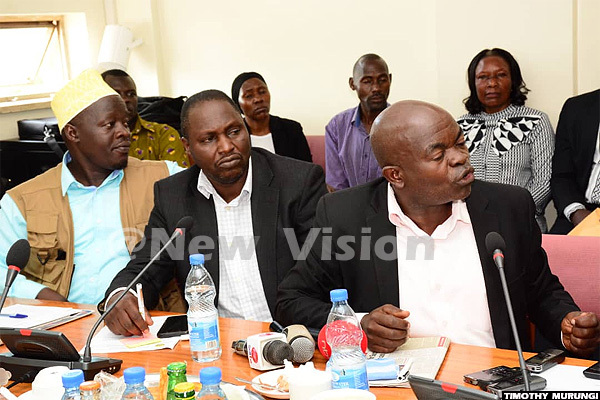 Buhweju district Woman MP Oliva Koyekyenga (pictured below) has expressed worry that the same version of events is what is happening in her area. She alleges that the so-called 'Mining Police' have invaded the mines with heavy military vehicles, beat up the miners and chased them away. 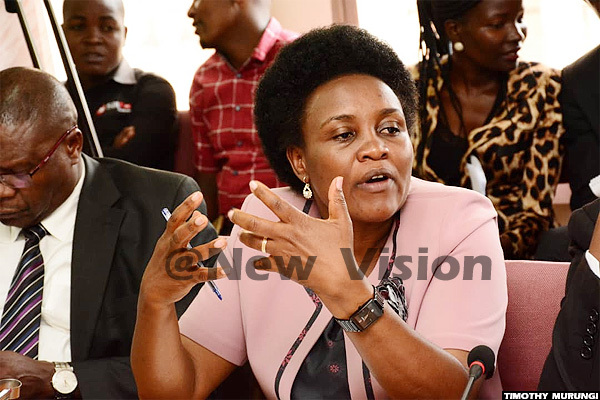 The health minister is at Green Hill Academy. 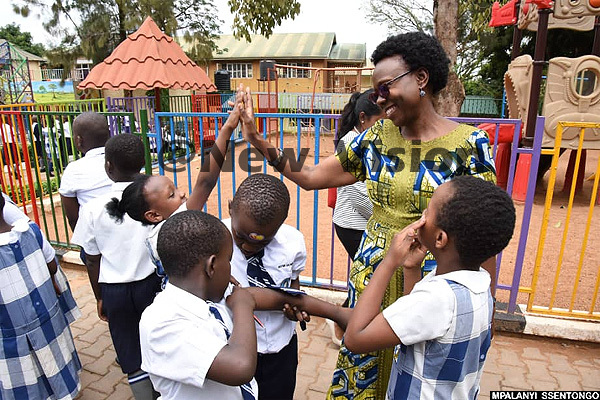 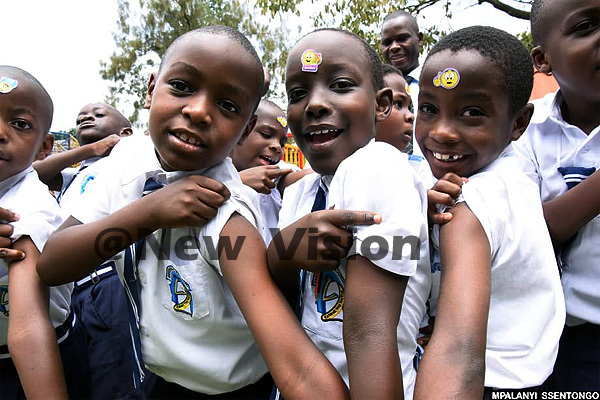 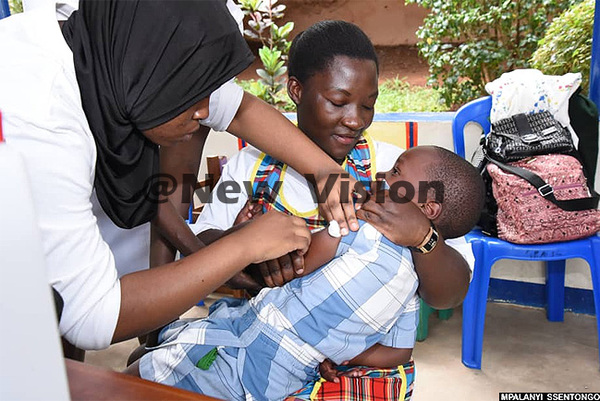 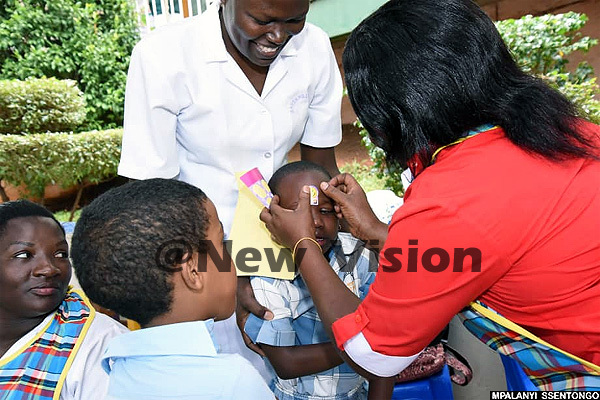 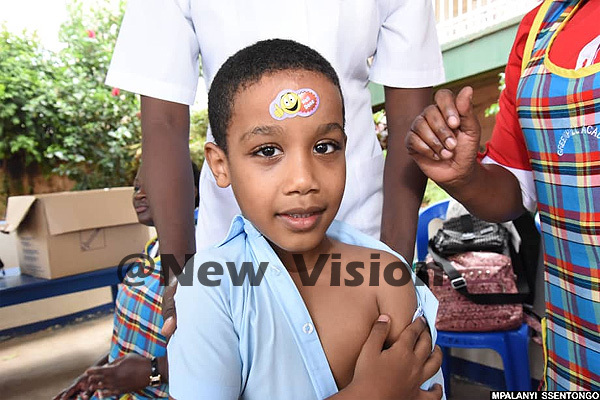 Earlier, I told you that the health minister, Dr. Jane Ruth Aceng, would make an appearance at Green Hill Academy in Kampala to immunise her daughter, who studies there.

The minister is at the school now and has been interacting with the pupils.

The mass immunisation campaign is going on and today, the Green Hill Academy pupils will be among those vaccinated against measles, rubella and polio. 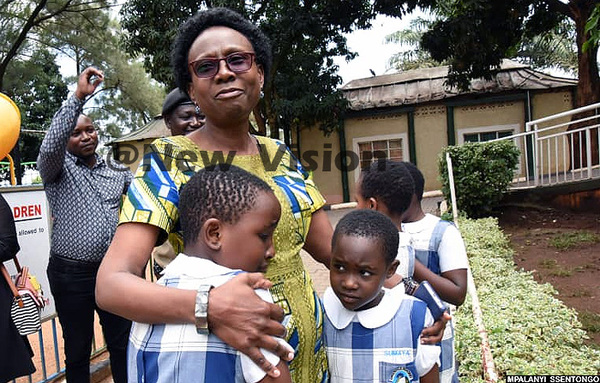 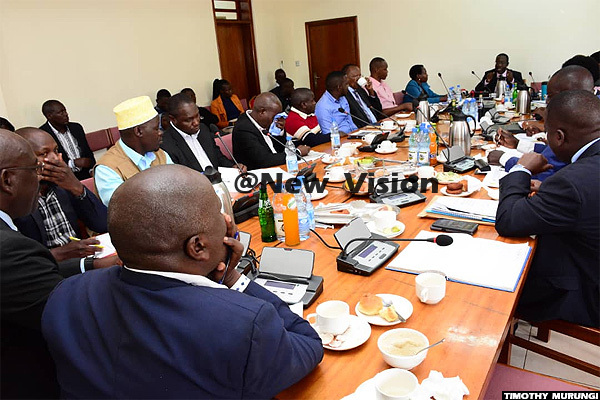 By Timothy Murungi at Parliament:

The Committee on Natural Resources will interact with petitioners of the over 20,000 Mubende artisanal and small scale miners who were evicted in literally two hours and reportedly not even allowed to take their belongings.

Three artisanal miner delegations are petitioning the Parliament committee on natural resources over the eviction of the miners.

The groups, Uganda Association of Artisinal Miners, Mubende United Miners Assembly and Federation of Artisanal and Small Scale Miners contend that local miners in Mubende were unfairly evicted in August 2017, only two months after they had petitioned the Speaker of Parliament, Rebecca Kadaga.

MPs who were sent on the ground (Mubende mines) found that the locals had already been evicted by the army to give way to the investor. 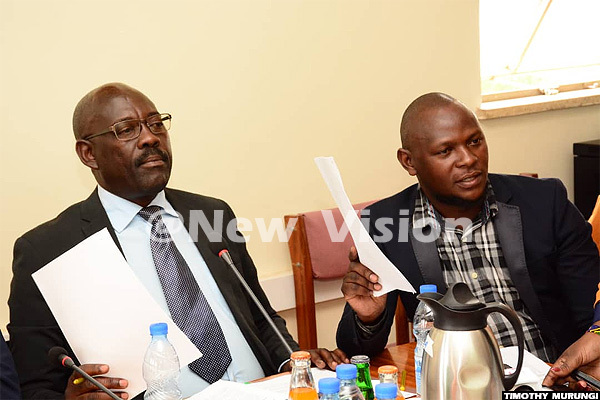 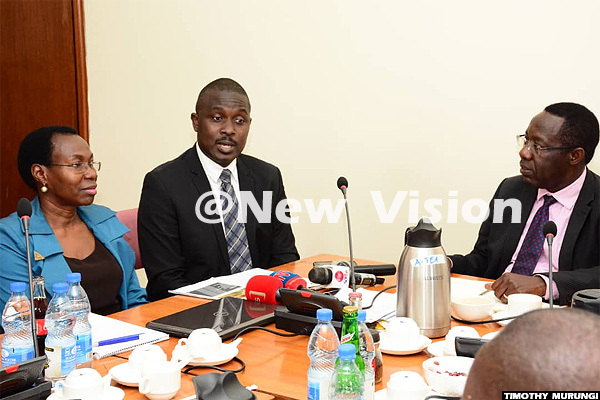 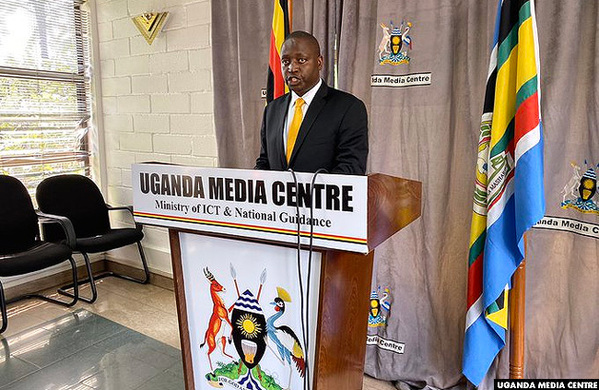 According to Minister David Bahati, it will provide an opportunity for networking and knowledge sharing amongst researchers, policy makers, program managers, public health experts, development partners and other key stakeholders.

The conference is organised every four years by the Union of African Population Studies.

The aim of the meeting is to share and disseminate scientific information on key population, health and development issues facing Africa.

The State minister for finance David Bahati has addressed a press conference on the forthcoming 8th African High-level Population Conference that will take place from November 18 until November 22.

The Uganda Media Centre has posted a video of his speaking to reporters.

VIDEO: Hon Bahati speaking to the media about the 1st to the 8th African Population Conference to be held in Uganda. #APC2019UG pic.twitter.com/wqvIkSwuwz

The mass immunisation campaign is on, and Vision Group chief executive Robert Kabushenga is urging his fellow Ugandan fathers to take their children for the exercise.

To fellow UG father's: Pse take your kids for #immunization against measles & rubella. Even the ones u have been hiding, arrange bse if they die u will have to own up earlier than planned. This might be the child that saves u in old age. Do this NOW! #InvestinUGChldren

We are understanding that health minister Dr. Jane Ruth Aceng will today immunise her daughter against Measles-Rubella and Polio at Green Hill Academy in Kampala.

According a statement released by the ministry's senior spokesperson Emmanuel Ainebyoona, Aceng will later address a press conference at the ministry of health headquarters at 2pm to give an update on the coverage of the ongoing campaign.

The mass vaccination campaign was launched on Tuesday, got under way on Wednesday and will run until Sunday. 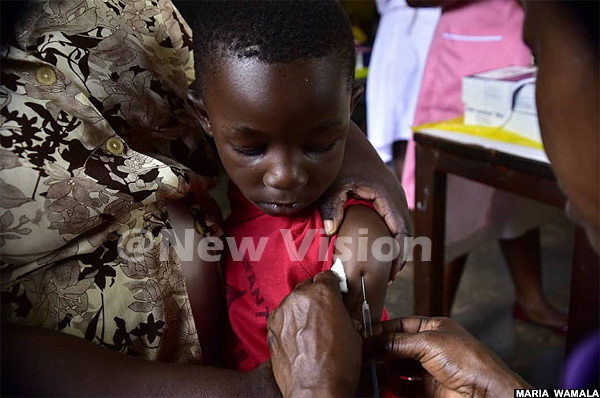 Today's Ras toon is on Police defending itself on military training.

The Police has defended military training insisting that it is because of the challenging situations at hand. pic.twitter.com/QGcQwk6apj 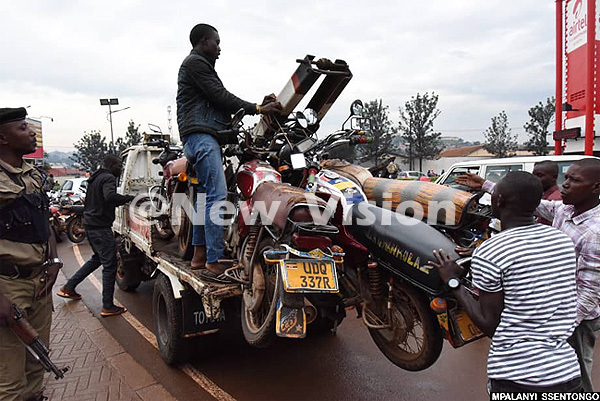 Police are impounding boda bodas that are unroadworthy and those whose riders are found without proper documentation.

Those not following the proper road regulations are also being arrested. 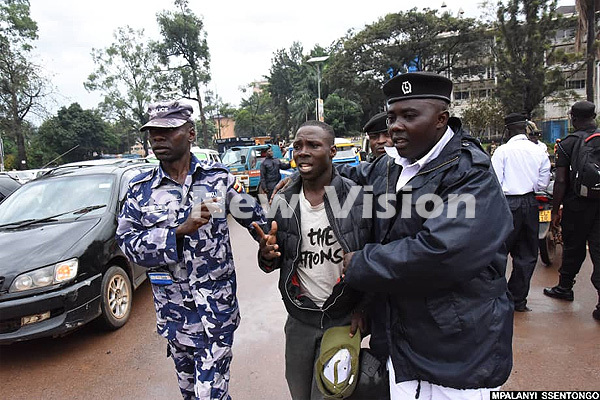 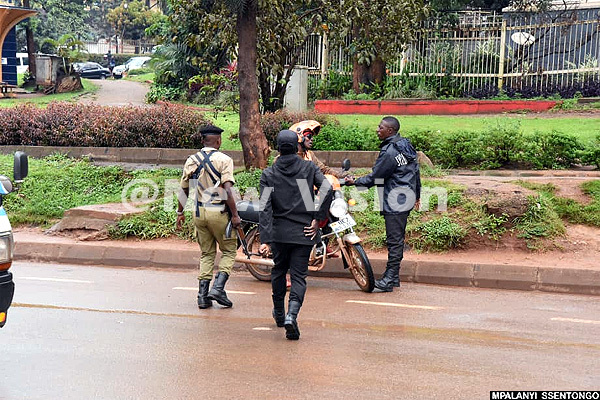 
9:40am |   A new addition to Uganda's mountain gorilla family

The wildlife and tourism fraternity - and Uganda at large -  woke up to good news today.  A celebration of new life in the mountain gorilla family. Uganda Wildlife Authority (UWA) says both mother and baby gorilla are doing just fine.

It is all happiness as we celebrate a new born in the Mubare group. Mother Businza and baby are in good shape.
Welcome to the world baby Gorilla. pic.twitter.com/tqBYunFNbt

If you are a tweep, you definitely know - or may want to know - what the rest of the Ugandan Twitter community is talking about.

Well, for starters, it has been the #uotnight, Trump, Jesus and #VisitUganda hashtags this morning.

But as you know, in the course of the day, other topics will pop up.

Check out the top four trending topics in Uganda this morning HERE.


9:20am |   Enanga disassociates self from land dispute

Police spokesperson Fred Enanga has rubbished allegations that he used his position to back his father in a four-square mile land dispute in Apac district.

Enanga dismissed as untrue, claims that he orchestrated the jailing of relatives, who claim that Enanga's father grabbed the Lango clan land. 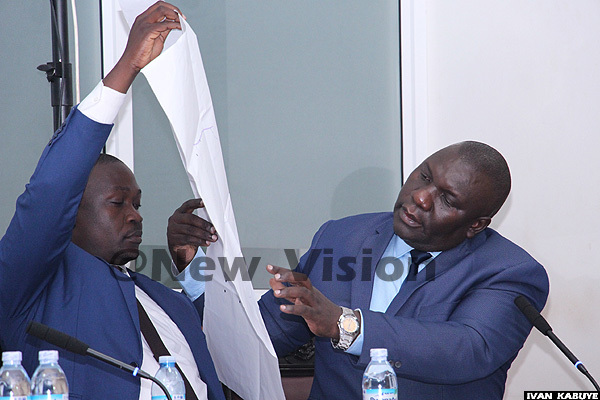 The Electoral Commission chairperson, Justice Byabakama Mugenyi Simon, is scheduled to address the press on the upcoming exercise of Verification of the National Voters' Register (NVR) at the Village Level and Identification of Persons with Disability (PWDs) in each village, and other electoral activities under the Roadmap for General Elections 2020/2021.

The press briefing will be at the Electoral Commission head offices in Kampala starting at 10:00am.

The Minister of Education and Sports is due to address the media and share outcomes of interventions implemented under the Uganda Teacher and School Effectiveness  Project (UTSEP) in Uganda and thereafter hand over the Special  Needs Hearing Aid Equipment to the health ministry for onward distribution to hospitals.

This is happening at the Office of the Prime Minister, in the auditorium.

The State minister for finance David Bahati is to issue a statement today about the forthcoming 8th African High-level Population Conference that will take place from November 18 until November 22.

The press conference will be at Uganda Media Centre starting 10:00am.

Hello and welcome everyone to yet another day of live coverage. I will attempt to keep you up-to-date with what's happening around this endowed country we have grown to call Pearl of Africa.

We reeling from a night of rain and trying to settle in for the day.

Have you gabbed yourself a bite yet? Don't forget to chase it down with a cup or two of coffee ot tea. Trust me, it will make you feel a whole better - and warmer! 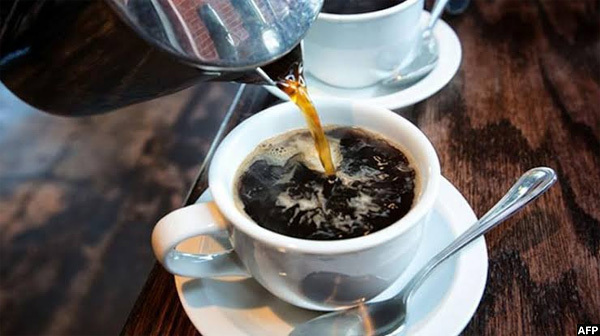 By the way, I have read somewhere that, according to research, drinking at least three cups of coffee and not smoking daily may half the risk of mortality in patients infected by both human immunodeficiency virus (HIV) and hepatitis C virus (HCV).

A morning health tip right there! 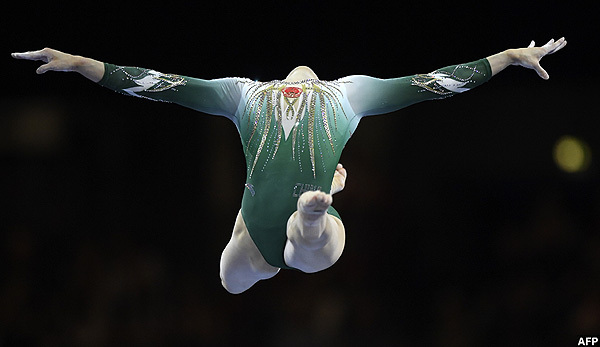 "The human capacity for burden is like bamboo - far more flexible than you'd ever believe at first glance." ― Jodi Picoult, My Sister's Keeper

"Flexibility is to embrace different viewpoints and alternative ways to do things." ― Pearl Zhu, Quality Master