Magogo said he would step down to allow FIFA to investigate the allegations and wait for the disposal of the case.

Magogo said he would step down to allow FIFA to investigate the allegations and wait for the disposal of the case.

FUFA boss Moses Magogo will temporarily step aside for two months to permit pending investigations by the Federation of International Football Association (FIFA) over the alleged sale of World Cup tickets.

Addressing the 95th FUFA Ordinary Assembly held at the Multi-Purpose Hall in Adjumani, West Nile on Saturday, Magogo told the delegates that he would step down to allow FIFA investigate the allegations and wait for the disposal of the case.

This development comes  two years when in June 2017, ahead of the FUFA elections in August that year, that brought in Magogo, Makindye West Member of Parliament and Shadow Minister for Sports in Parliament Allan Ssewanyana petitioned FIFA, arguing that Magogo was involved in the illicit trading of 2014 World Cup tickets that were designated for Ugandans, by FIFA for the 2014 World Cup, and that this was in violation and breach of the FIFA statutes, FIFA Code of Ethics and FIFA Disciplinary Code.

Ssewanyan's prayer then to the FIFA Ethics and Integrity Committee was to have Magogo suspended as FUFA president as investigations go on, just like was the case with former FIFA president Sepp Blatter in 2015. 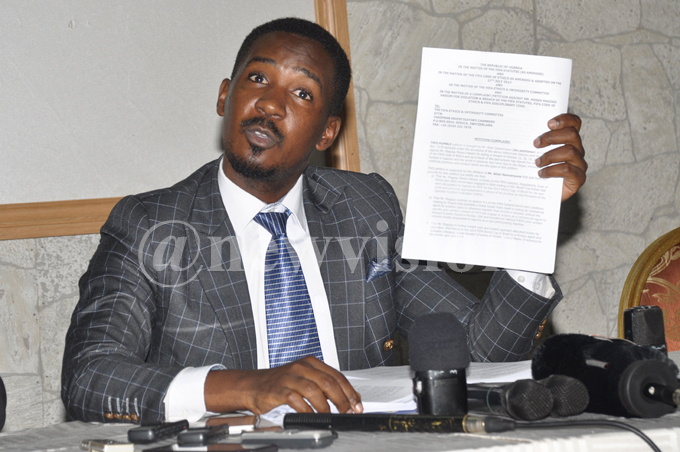 Ssewanyana brandishes the copy of the petition he sent to FIFA during a press conference in Kampala on June 7 2017. PHOTOS: Michael Nsubuga

"I sent the petition on May 30 with all material evidence both oral and documentary that clearly implicates Magogo as having acted in breach of the FIFA statutes, disciplinary code and articles 13, 18, 19, 20, 21 and 22 of the FIFA code of ethics and as a result of the said actions has dented the image of Ugandan football due to the illegal, immoral and unethical practices and conduct which is the basis of the petition," Ssewanyana reasoned, then.

But Magogo who had been at the CAF Congress in Manama Bahrain, where he was appointed a member of the CAF Executive Committee 2017 - 2021 and a member of the CAF Reforms Committee, could not comment on the matter, but instead refered New Vision to the federation spokesman Ahmed Hussein, who later issued a statement calling the accusations "election-related machinations"

But in his petition, Ssewanyana asserted that the receipt of $5,000 by Magogo as part profit from a one US based Howard Schwartz out of the Ugandans designated World Cup tickets for further sale in the US and elsewhere was tantamount to acceptance of gifts and other benefits for personal gain, contrary to Article 21 (2) of the FIFA Code of Ethicsl.

For every FIFA World Cup tournament, a particular number of tickets are allocated to each federation prior to the championship.

Magogo speaks out on CAF committees