'Thank you': A show of sportsmanship in Doha

Both Dabo and Busby had already been lapped and were competing only for pride when their final lap drama unfolded.

Both Dabo and Busby had already been lapped and were competing only for pride when their final lap drama unfolded.

DOHA - Unheralded 5,000 metre runners Braima Suncar Dabo and shattered rival Jonathan Busby drew the biggest cheer of the World Championships on Friday after a dramatic finish to their race marked by a gesture of sportsmanship.

Unheralded 5,000 metre runners Braima Suncar Dabo and shattered rival Jonathan Busby drew the biggest cheer of the World Championships on Friday after a dramatic finish to their race marked by a gesture of sportsmanship.

Both Dabo and Busby had already been lapped and were competing only for pride when their final lap drama unfolded at Doha's Khalifa Stadium.

Aruba's Busby, 33, had slowed to almost a crawl down the back straight on the last lap, lurching forward uncertainly and appearing close to collapse.

It was then that Guinea Bissau's Dabo came to Busby's rescue, stopping to prop up his fellow racer and leading him around the final 200 metres to the finish line.

With the crowd roaring them on, Busby collapsed after crossing the line and was eventually taken away in a wheelchair.

"I just wanted to help the guy finish the race," Dabo, 26, said afterwards through a translator.

"I wanted to help him cross the line. I think anyone in that situation would hve done the same thing," added Dabo, who is a student in Portugal.

Despite the finish -- nearly five minutes behind heat winner Selemon Barega of Ethiopia -- Dabo's time of 18min 10.87sec was still a personal best.

But there was a sting in the sporting tail for Busby, who was disqualified.


Heat is on Coleman and world championships organisers 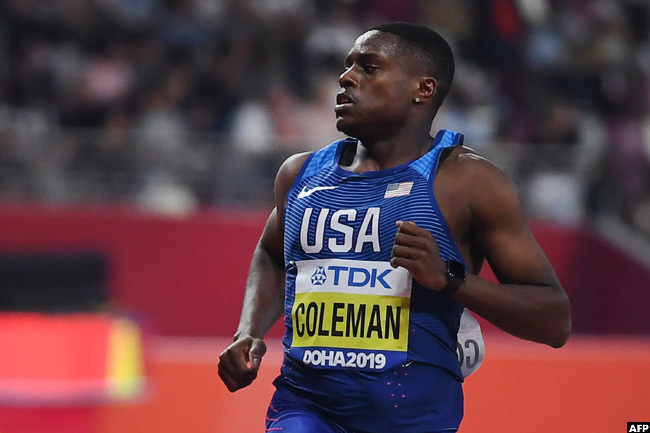 Controversial US sprinter Christian Coleman's bid for 100m gold takes centre stage at the World Championships on Saturday as endurance athletes prepare for another battle with Doha's punishing heat and humidity.

Coleman will aim to clinch his first major championship outdoor title at the Khalifa Stadium, just weeks after escaping a lengthy anti-doping ban because of a technicality.

Coleman has received strong public backing from world athletics chief Sebastian Coe, who has defended the American sprinter's right to be regarded as a clean athlete.

The 23-year-old from Tennessee narrowly avoided a ban after failing to properly notify drug testers of his whereabouts on three occasions in a 12-month period -- an offence normally punishable by a one-year suspension.

"We have to be very careful not to play fast and loose with the reputation of athletes," Coe said on Friday following criticism of Coleman by US sprinting legend Michael Johnson.

"I am pleased Coleman is here and I want to make sure he is given every opportunity to be one of the faces of these Championships," the IAAF president added.

Coleman, who was the only runner to duck inside 10 seconds in Friday's opening heats, has angrily denied any suggestion he is guilty of taking performance-enhancing drugs.

He refused to speak to reporters on Friday after cruising through his heat.

On Saturday one of his main challenges is likely to come from veteran Justin Gatlin, the 37-year-old defending champion. 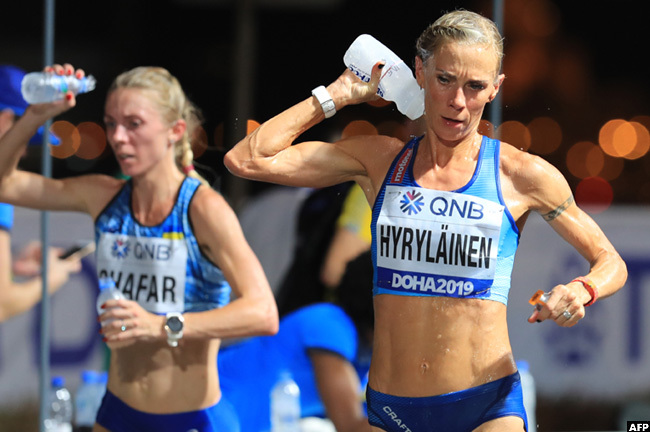 Coe and other IAAF organisers meanwhile will be nervously keeping an eye on Saturday's two endurance walking finals, the men's and women's 50-kilometre races.

The races get under way at 11.30pm local time in what are expected to be sweltering conditions.

The races take place 24 hours after the first day's opening women's marathon, which saw Kenya's Ruth Chepngetich take gold after an arduous test of endurance that saw 28 of 68 starters fail to finish.

The fact all three of the fancied Ethiopian team departed before the 20 kilometres mark reflected the unforgiving climactic combination of 33 degrees Celsius (91 degrees Fahrenheit) heat and humidity of 73%.

Canadian marathon runner Lydnsay Tessier revealed afterwards that the conditions, and high casualty rate of her fellow competitors, had left her unnerved.

"You see somebody down on the course and it's just, extremely grounding and scary," said Tessier, who finished ninth.

"It was just really scary and intimidating and daunting," the 41-year-old added. 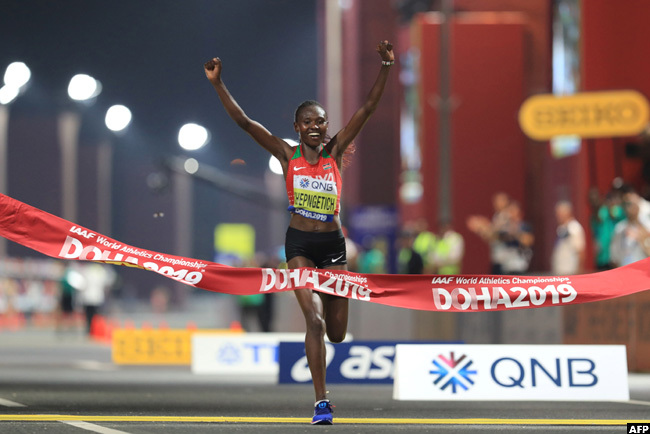 The marathon havoc will have done nothing to calm the angst of France's 50 kilometres walk champion Yohann Diniz, who defends his title on Saturday.

Diniz angrily hit out at organisers on Friday for forcing walkers to race in the heat while track and field athletes are competing in a comfortable 25-26 degrees celsius climate-controlled Khalifa Stadium.

"I am disgusted by the conditions," the Frenchman said.

"I am extremely upset. If we were in the stadium we would have normal conditions, between 24-25 degrees, but outside they have placed us in a furnace, which is just not possible."

Aside from the 100 metres and the two walks, three other titles wll be decided, the men's long jump and the women's hammer and 10,000 metres.

The latter event should ensure a sizeable contingent of Ethiopian and Kenyan spectators, who proved invaluable in livening up the atmosphere on the opening day.

Heat is on Coleman and world championships organisers