UPDF deploys in Arua over Police murder
Next Story

Chief Justice Bart Katureebe has set up a six-member taskforce to investigate allegations of corruption in the Judiciary.

Chief Justice Bart Katureebe has set up a six-member taskforce to investigate allegations of corruption in the Judiciary.

KAMPALA - According to Article 23 (6) of Uganda's Constitution, bail - whether non-cash or cash - is a right. But a recent undercover investigation by Sunday Vision uncovered a racket of court clerks, food vendors, Police officers, state attorneys and prison officers who steal millions of shillings from desperate Ugandans and suspects in need of non-cash bail.

When a person pays for bail, the money is refundable. However, the struggle Ugandans go through to get bail has left the Judiciary stuck with sh24b unclaimed, according to its former permanent secretary Kagole Kivumbi.

Kivumbi, who has since been replaced by Pius Bigirimana (former gender ministry PS), told Parliament recently that to get money back, one needs a court order, which is hard for an average citizen. The Sunday Vision investigation revealed that in cases of non-cash bail, some oficials milk money from ignorant suspects or their relatives in exchange for freedom.

It is against the background of this and other corruption-related cases in the judiciary system that Chief Justice Bart Katureebe has set up a six-member taskforce to investigate allegations of corruption in the Judiciary.

The team is headed by the Inspector of Courts, Immaculate Busingye.

Two days after the July 7, 2019 Sunday Vision led with the investigative story 'EXPOSED: STINKING BRIBERY IN THE COURTS', Katureebe came out to welcome efforts by Vision Group to expose acts of bribery and corruption tendencies in courts.

According to a statement by the Judiciary, he went on to interface with the multimedia organisation's top editors "partly to commend them for the efforts, but also caution them againsts sensationalising the issue of corruption in the courts.

The Chief Justice underlined his administration's commitment to ensuring that any court staff captured receiving a bribe would be dealt with in accordance with the law.

"What has been happening is, people say they have paid money for court services, but they are usually not willing to bring the evidence to us. We encourage such audits in all courts, and we are willing to do it as a partnership. Our aim should be to take action on the culprits by the Judicial Service Commission," he is quoted as saying.

Katureebe said the Judiciary shall continue to encourage court users and the public to use the available fora to come out and give evidence for firm action to be taken against errant court staff.

The task at hand

The newly unveiled judiciary taskforce's work is cut out.

According to the Office Instruction No. 4 of 2019 dated July 30, 2019, team leader Busingye and co would hit the ground running "with immediate effect" - and would report to the Chief Justice within 60 days.

The Chief Justice may extend the tenure of the taskforce if need arises.

There are four terms of reference to the committee.

One of the terms is to "interface with the investigations team of Vision Group to understand the scope and purpose of their ongoing project on exposing corruption in the Judiciary".

The team will then receive the media recordings with a view of identifying the implicated Judiciary staff, who would then be invited to have an interface with the committee.

The taskforce will thereafter make a report to the Chief Justice with recommendations on the way forward by 30 September 2019.

The five other members of the committee

3. Godfrey Kawesa, the president of Uganda Judicial Officers Association (UJOA), which is the umbrella professional body that brings together justices, judges, registrars and magistrates

4. Ayebare Tumwebaze, the assistant registrar in the Office of the Chief Registrar/Projects

Tip of the iceberg - a case in point

The Sunday Vision investigation team spent nearly a month monitoring the murk of corruption at the City Hall Court.

The estimation is that at least sh100m is paid out to the vendors of justice who include Police oficers, prison warders and court staff.

Unlike other courts which are also mired in corruption, the City Hall Court bribe collectors cut an authoritative poise, are rude and even shout at the ‘clients'. The harshest bribe collectors are the prison warders (who escort the remand prisoners), some of whom these days wear body armour battle gear, under which the collections disappear once received from the ‘clients'.

Apart from the toilet, the bribes are paid at other points on the court premises. There is a warder in body armour who usually takes his collection while seated cleverly in a position that makes it hard for one to see. This warder we uncovered was harsh and impatient.

The prisoner's relatives had said they were too poor to raise the sh150,000 demanded for non-cash bail. The prisoner's offence was hawking merchandise without a licence. 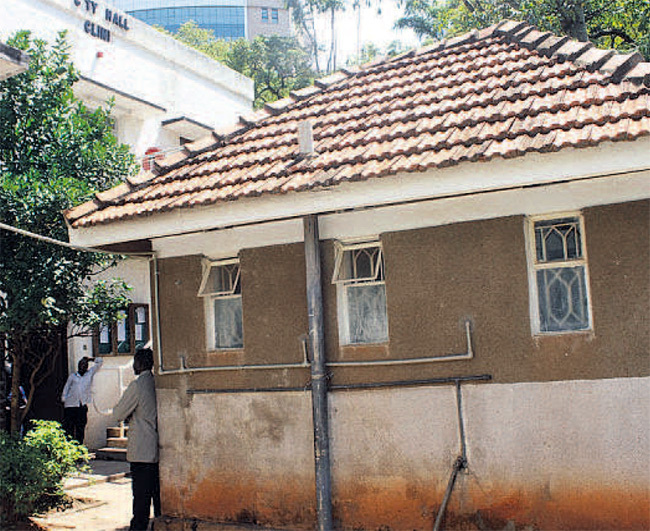 City Hall toilets where bribery was found to have been taking place. (Credit: Sunday Vision)

The team visited Kasangati Magistrates' Court in Kasangati town council, Wakiso district. One prison warder who had escorted prisoners for a court session accosted one of the Sunday Vision investigation reporters and asked whether they had a case in the court.

"You have been sitting here for long, do you have a case?" he asked the reporter, for which he got an affirmative response. The journalist said one of his relatives was locked up and they were trying to process bail for him.

"Here, money talks. If you have something, go to the office at the back of the courtroom. You will find a clerk to the magistrate. Explain your problems to her. She will name a price and if you bargain well, you will end up paying something like sh300,000 and have your person out," he said.

The prison warder further warned the journalist of the dangers of following the due process to acquire bail, saying the magistrate could delay the process by further remanding the suspect to Luzira Prison.

He said the sector does not condone corruption, which is why "several court oficials have been arrested and investigated and some ired from their jobs".

"Our experience shows corruption is two-fold; the actual corruption and perceived corruption, often perceived by aggrieved parties in a particular case. That's why we call upon the public to report because it's only corruption when it's proved," he said.

Muyita said they receive many complaints on bribes and currently they are working on an electronic case management system.

"We are also working with the National Information Technology Authority [NIRA] so that people can access court services online. When we limit the human interface, chances of people being corrupt will be minimal because people will not speak to someone or you won't be able to negotiate or get a promise from anyone. It has worked elsewhere and we believe it can work here."

‘‘We have not seen your report. But what I can say is as DPP, we do not condone corruption. It would be ridiculous if we did because our mandate is to fight crime in all its forms. And corruption contradicts the set code of conduct for any public oficial, including state attorneys."

On the mechanism used to investigate these cases, she said they are robust, whether internally or not.

"How we wish the people who are asked for bribes make reports to the supervisors of those oficers because these oficers who are accused of taking bribes need a fair hearing too."

Kajuga said corruption cannot be fought unless citizens are involved.

"I think we miss the point when we say we are going to fight corruption and leave it to the Police, Judiciary and prosecutors. We need to do community education and let the public know they are not supposed to pay for the services. We need to engage the citizens to rise up and lodge these complaints."

Why judiciary must be free from corruption