The Public Parliament was chaired by Wasswa Kassim Ssensalo, as legislators debated on service delivery in local governments.

The Public Parliament was chaired by Wasswa Kassim Ssensalo, as legislators debated on service delivery in local governments.

Have a great weekend!

Will be back on Monday.


Vipers SC have a do-or-die match against Tunisian side CS Sfaxien this Sunday. After a goalless first leg in Kitende last week, Ugandan league reigning champions will have to give their all to go past Sfaxien and progress to the group stage.

A 25-strong delegation flew out of the country Friday morning headed for Tunis for the crucial tie that is only two days away.


A 25 man delegation comprising of 17 players and 8 officials led by Fufa executive member Rogers Byamukama departs on Friday morning at 04:55am aboard Turkish Airlines flight to Istanbul from where the team will connect to Tunis.

Our 25 man contingent that will travel to Tunisia 🇹🇳 ahead of the CAF Confederation Cup return leg with CS Sfaxien on Sunday 👇https://t.co/dMdbEig6wJ

A speeding bus, which was en route to Rukungiri district from Kampala tipped in Lwera stretch, about three kilometers to Lukaya town.

As many as 80 people were on board. Luckily, all of them survived, with only a handful of them picking up minor injuries. 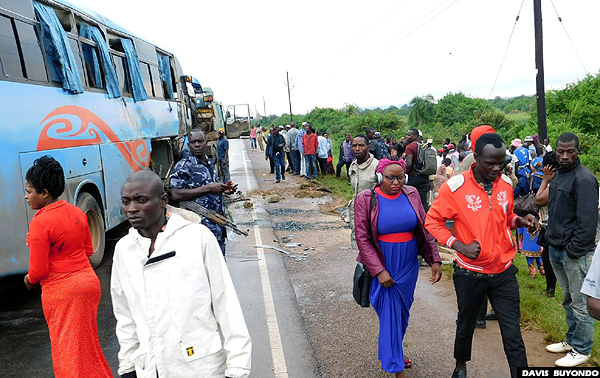 The Public Parliament plenary was opened by Deputy Speaker of Parliament Jacob Oulanyah. 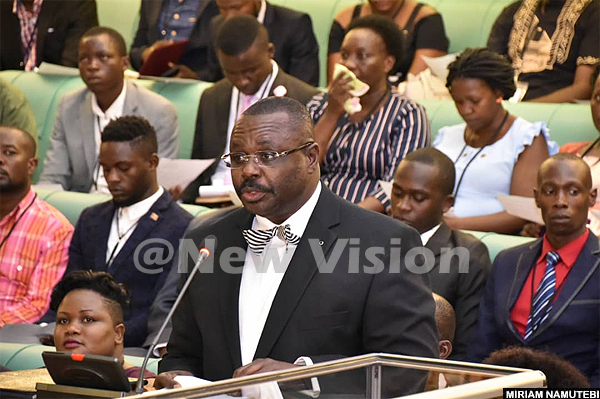 It is a full House. Delegates, many of them their first time in Parliament, were attentive. 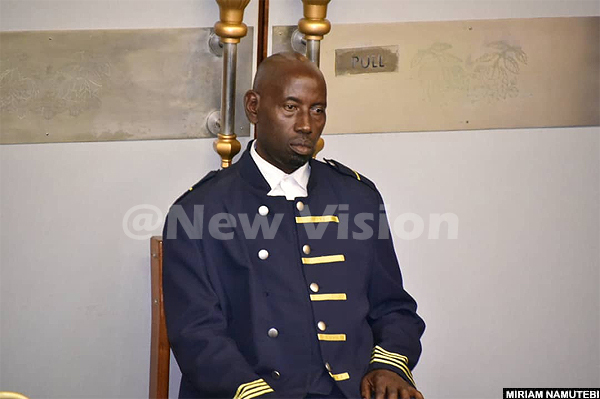 Elizabeth Wanyana is the Leader of opposition in the Public Parliament. The MPs are debating service delivery in local governments. 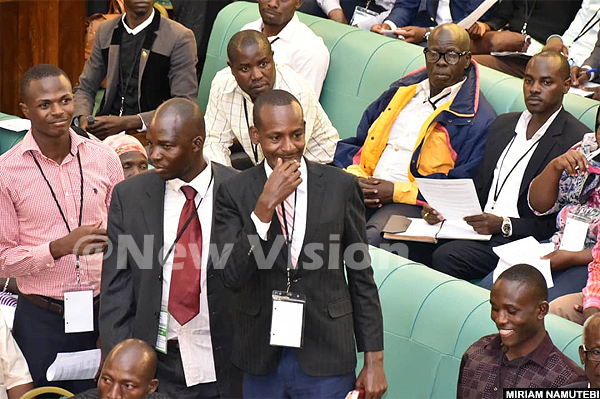 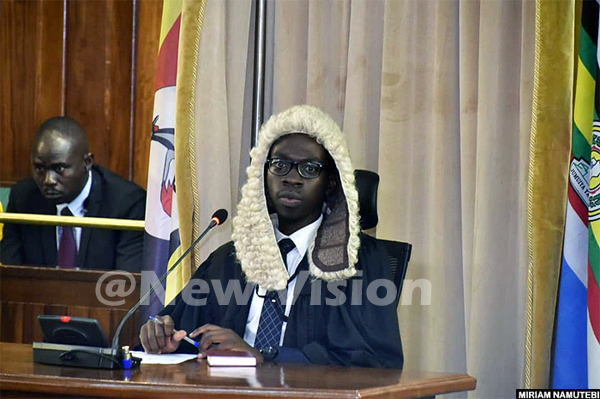 Meanwhile, the Speaker of Parliament, Rebecca Kadaga is not in parliament today.

She was away in the eastern part of the country - Bukwo district- for the closure of the 15th International Christian Women Conference, annual interdenominational conference held countrywide. This was at Kabei Senior Secondary School. 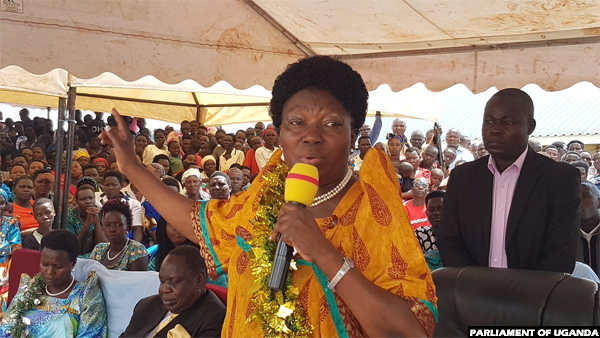 Kadaga promised to follow up an earlier presidential pledge to build schools for girls who abandoned Female Genital Mutilation (FGM). Sabiny leaders hailed her for championing the fight against FGM and for consistently attending their annual cultural day.

The Speaker is due to attend the 2018 Cultural Day in Bukwo, which was moved to January 18 in favor of her schedule.

The gentleman you see in the picture immediately below is Wasswa Kassim Ssensalo. Earlier, he was elected as the Speaker of the Public Parliament of the 2019 Parliament Week.

After opening remarks by Deputy Speaker of Parliament Jacob Oulanyah, Wasswa is now chairing Parliament's afternoon's sitting. In this session, MPs are expected to debate on service delivery in local governments.

Much earlier in the day, delegates to take part in the Public Parliament were taken through the rules of procedure. The election of the Speaker of the Public Parliament was conducted by staff of the Department of Communication and Public Affairs with the head of the electoral commission being the Assistant Director, @hnanteza assisted by @gmkatamba, @nsimbek , @cbukuwa and @podeke among others pic.twitter.com/pTz2r0sQHn

KCCA FC have a Herculean task ahead of them


In the first leg played in Owando, KCCA - rather uncharacteristically - shipped three goals as Otoho established a strong case for their credentials in the competition.

If you missed it, read the match report 👉 HERE.

CAF CONFEDERATION CUP: KCCA have "a lot of belief'


KCCA FC have a difficult game this Sunday.

It will be the return leg in the playoff round of the CAF Confederation Cup against Congo Brazzaville side AS Otoho. The Ugandan side were beaten 3-0 on the road and will have to score four goals without reply to move on to the group stage.

Coach Mike Mutebi admits that it will be a hard game but that his side have "a lot of belief that they can do it".

"We are well prepared. We are going to do it the hard way. But we have the capacity to correct the results. My players have a lot of belief that they can do it," he told a press conference on Friday.

"Tthe coach may believe and try to inculcate that belief in players, but when the players don't appreciate it, it's difficult. But now they believe - and they have gathered enough experience now to know how to negotiate such a tie.

"It's going to be hard, but it is achievable," he said.

Mike Mutebi speaks ahead of our #CAFCC league game against @OtohoAs this Sunday. #KCCAFC pic.twitter.com/0N6YrgNoN6

He has been studying law at the university. National Jumaa Special Prayers were 'not cleared by UMSC'

Earlier today, the Police released a statement explaining why the religious function would not take place today.

Police says the gathering "was not cleared by the Uganda Muslim Supreme Council", which is "legally mandated to oversee all activities of the Islamis Faith in Uganda".

It is understood that the organizers have been asked to set another date for the prayers.

This is what the Police tweeted:

So what is Kampala Capital City Authority (KCCA) planning to do within the first half of the year?

The Authority has set what it calls "an ambitious yet achievable plan across our areas of operation".

The plan include road and drainage works, street  lighting, waste management,  revenue administration to economic empowerment of the vulnerable groups through skilling and job creation.

Objectives set to deliver quality services to the people of #Kampala. What's our plan for the next 3 to 6 months? This elaborate DOCUMENT will give you an outlook ➝ https://t.co/AMnsKwDzJu#KCCAatWork pic.twitter.com/WhRSyguh3K

The African Rock Python, nearly two metres long and six years old, has been been living at Parliament for nearly a week.

The serpent is on display for the 2019 Parliament Week, where various government institutions and agencies have been invited to give accountability to the public. 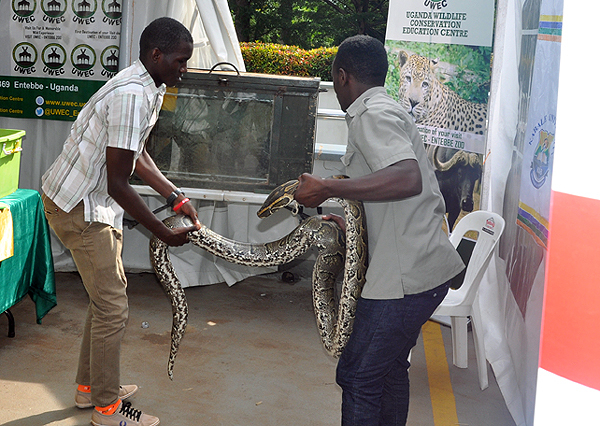 Speaking at the final graduation session, Vice-Chancellor Prof. Barnabas Nawangwe thanks "the organizations and individuals, who have provided scholarships to enable many academically bright, but economically disadvantaged young people to access higher education at Makerere University".

Some of the establishments he names include The MasterCard Foundation, the Female Scholarship Scheme, The Chinese Embassy in Uganda, The Madhvani Foundation and Makerere University Council.

The latter established a scholarship scheme to support students from northern Uganda.

"This is to inform all continuing students, parents, guardians and staff that Makerere University will open as planned for semester two 2018/2019 Academic Year, tomorrow 19th January, 2019," tweeted the university. 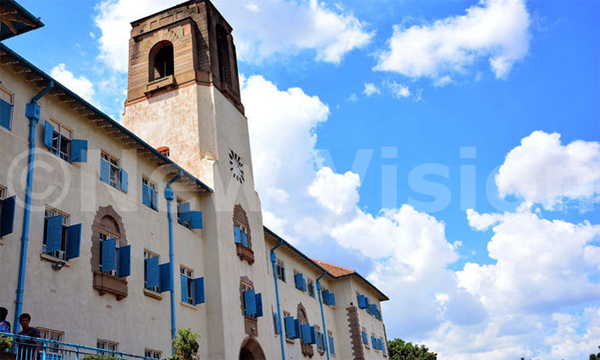 Check out pictures of some of the stars of the 2018 Primary Leaving Examinations (PLE), whose results were released on Thursday in Kampala. Sh28b could have gone to ghost youth groups - AG

The Auditor General has said in his latest report to Parliament that sh28.4b could have been given to non-existent youth groups countrywide to fight unemployment.

Sure Deal boss charged with counterfeit

Sure Deal boss Prossy Maria Namwanje has been charged with dealing in counterfeit products. She appeared before the Buganda Road Court chief magistrate, Gladys Kamasanyu on Wednesday.

According to the charge sheet, Namwanje was charged with five counts relating to applying Uganda National Bureau of Standards (UNBS) quality mark on her products without a permit, being in possession of commodities that do not conform to compulsory standards, selling of products that contain banned substances especially hydroquinone (a prohibited substance in cosmetics).

Dr Tanga Odoi, the chairperson of the Makerere University Convocation (an association of old students), has advised the staff of the university to respect the Vice-Chancellor, Prof. Barnabas Nawangwe, to enable him carry out his work expeditiously.

Odoi, who once served as the chairperson of Makerere University Academic Staff Association (MUASA), said the staff should instead work towards having a harmonious relationship with the institution's management to move the university forward. 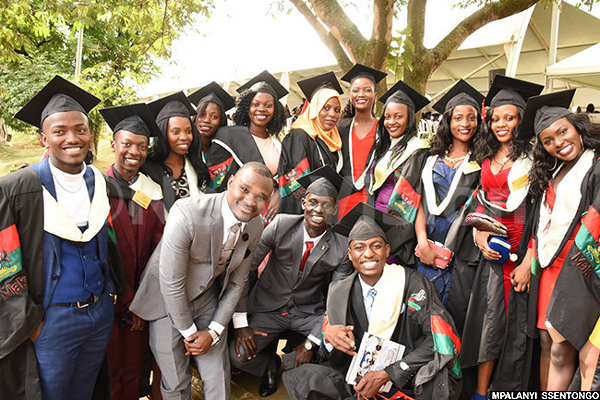 The Ugandan president landed in Ethiopia's capital Addis Ababa on Thursday to attend a high-level consultation meeton on the situation in the Democratic Republic of Congo.

Arrived in Addis Ababa, Ethiopia, this afternoon to attend the Africa Union heads of state high level consultation meeting on the situation in the Democratic Republic of Congo. pic.twitter.com/g8bWbGbLau


Police in Rubanda is hunting for a vehicle that knocked dead a 40-year-old man, according to Kigezi Police spokesperson Elly Maate.

The hit-and-run accident involved an unknown speeding motor vehicle and Tumukunde Silivano, a carpenter from Muzirante cell in Shebeya parish, was killed while walking along the road.

This happened in Hamurwa town council along the Kabale-Kisoro highway at around 8pm Wednesday, according to Police. The victim was found lying dead on the road and Police was immediately notified, who later visited the scene.

Inquiries were initiated to establish the involved motor vehicle as well as the cause of the accident.


A last-gasp winner by substitute Ibrahim Kayiwa gave Express FC the ticket to the round of 16 of the Stanbic Uganda Cup at the expense of Water FC.

The visitors had seen their lead cancelled out three minutes into the second half via an own goal by John Revita. And in a game of chances, both sides searched long and hard for a winner, until Kayiwa's stoppage time header proved decisive.

It wasn't the most convincing of displays by Express, and their coach, Kefa Kisala, admitted after the game that his side were below par.

But then, it may have been shabby but a win is a win. They are through.


So what happened during the final one hour when a team of commandos killed four Islamist militants hours after Tuesday's deadly attack on a hotel complex in the Kenyan capital Nairobi?

Details have emerged, and Kenya's Standard Digital has them.

"It was dark and we knew the floor where they were trapped was up there. We moved to the other blocks and managed to free 174 people who had been trapped for close to 12 hours," the paper quotes an official as saying.

Inside last one hour to crush terrorists https://t.co/DS0DbMMBfN


By the end of today, New Vision's Ivan Kabuye  and Karim Ssozi will officially be graduates!

The two students, who pursued a Bachelor of Industrial and Fine Arts degree, are graduating today. What happened on Thursday

And when I say a lot, I mean there was plenty of PLE to write home about. Check out the top stories of Thursday HERE. 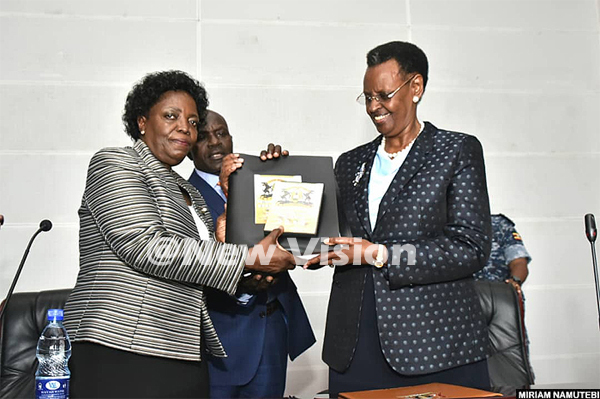 
A week of graduation comes to an end today.

Four in a row

And why is that?

The Makerere University Business School (MUBS) now-graduate emerged as the best overall and best student in Humanities. She scored an impressive CGPA of 4.94 in the Bachelor of Business Computing and graduated with a First Class Honours Degree on Thursday - the third session of Makerere University's 69th graduation ceremony.

Just so you know, this is the fourth time that MUBS is producing the best overall student. 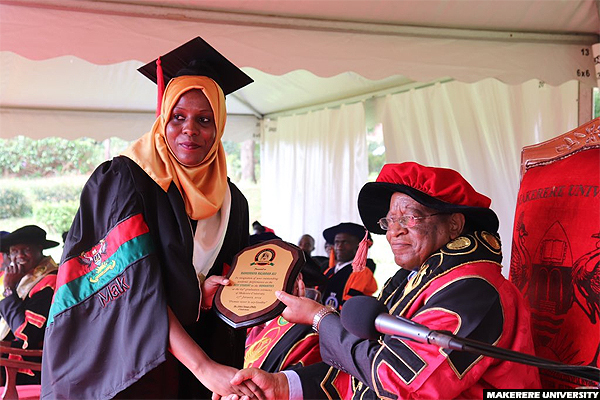 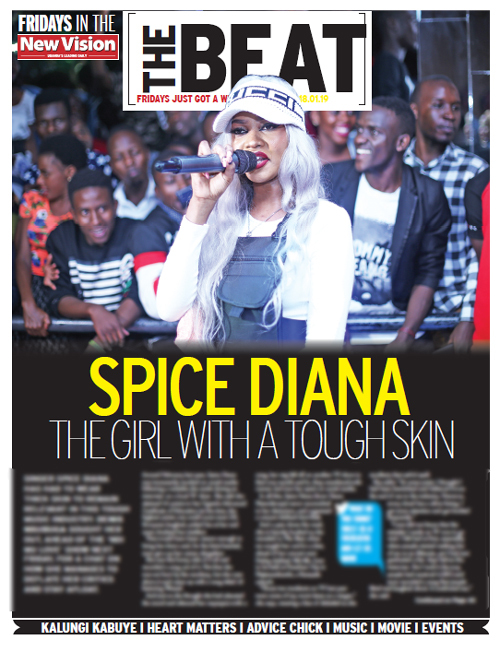 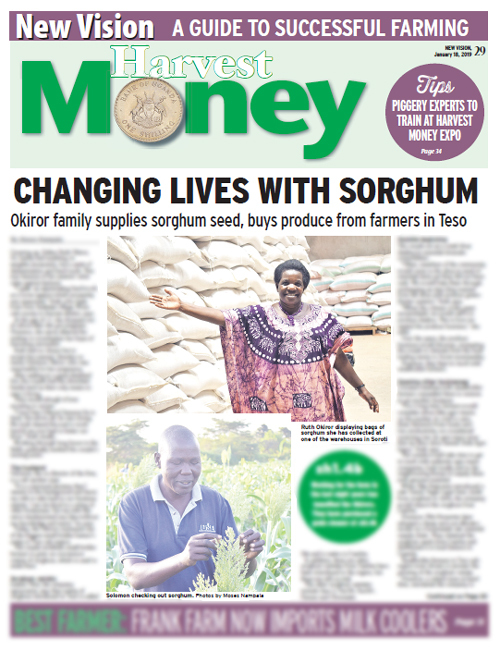 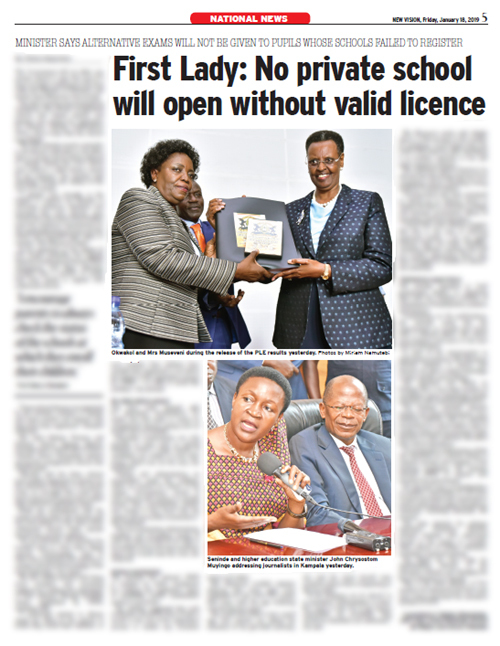 
From Bujumbura to Gitega.

Here is another day, and thank God it's a Friday - or like the folk of this generation love to put it, TGIF!

Welcome to our last live page for the week, and there should be plenty of stuff happening ahead of the weekend.

Any big plans for Saturday on your end?

Planning a party with friends?

Or an excursion to an island?

Perhaps you will be like me who is planning to stay home and catch up on a bunch of movies?

Hello there! Know what? The clouds are quickly gathering over the city. A morning downpour looming for sure.

So if you haven't yet hit the road, be sure to grab an umbrella - and prepare to get stuck in morning jam.

I have never really understood the link between rain and heavier traffic jam. You? 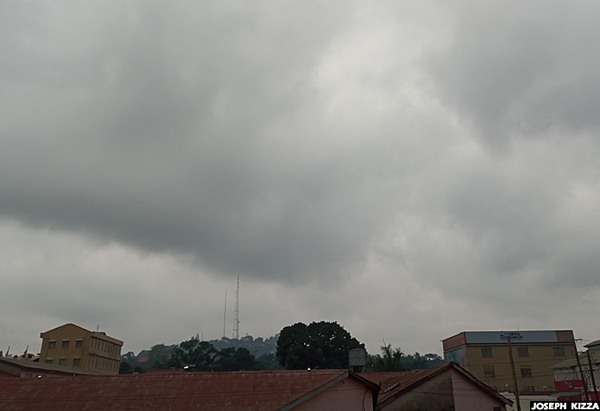 Who will take the crown from the African Quinn?

Profiles of some of the Miss Uganda contestants