Vipers knew they could not afford to falter any further at this stage of the campaign - and they come good on their word.

Vipers knew they could not afford to falter any further at this stage of the campaign - and they come good on their word.


Defending league champions Vipers SC put their recent slump to bed and returned to winning ways as they brushed aside Onduparaka FC in one of Tuesday's three games.

After a run of two disappointing goalless draws, including one under interim head coach Michael Ouma's regime at the turn of the year, the Venoms, the only unbeaten side this season, rediscovered their potency with a convincing display at home.

Ouma, who took the place of sacked Mexican Javier Martinez Espinoza two days before the end of 2018, will have been delighted by the enthusiasm that his side injected into a tie they crucially needed to win.

Anything short of a victory would have hampered their title defence quest, considering that their closest challengers KCCA FC were relishing a four-game winning streak, including Tuesday's 1-0 away victory over URA SC.

Vipers knew they could not afford to falter any further at this stage of the campaign, yet against visiting Onduparaka at St. Mary's Stadium, a goalless opening half appeared to boldly spell the unwanted word 'déjà vu' across the faces of the home fans.

Ten days back, Tooro United had held them at this very venue in Martinez's last game in charge, but Geoffrey Wasswa made sure recent history did not repeat itself when he struck four minutes into the second half to put the Venoms in front - and at the same time settle nerves.

Happy to be back on the score sheet with a beauty ⚽ pic.twitter.com/VDeNOYrR21

And Dan Sserunkuuma's rasping strike in the 53rd minute did well to improve their lead as well as reinstall confidence within the home faithful. Livingstone Mulondo then put the contest beyond Arua-based Onduparaka with a reassuring third goal 18 minutes before time.

At this point, the visitors had not made any changes. Three minutes after collecting the ball from their own net for a third time, Onduparaka made their first substitution. Solomon Okwalinga came on for Gaddafi Gadinho - but he did not last more than five minutes on the pitch before he was booked for a cheeky challenge.

Despite their late reforms, Onduparaka offered little to change the look of the scoreline, and a forgetable trip for them saw them slip into fourth place - level on points with now-third-placed Mbarara City (24 points) but with a lower goal difference.

Vipers, on the other hand, enjoyed their first win under Kenyan caretaker Ouma to maintain a seven-point gap with on-form table toppers KCCA.

The leaders, meanwhile, were not at their usual goal-scoring best that has typified their performances this season, but they still did manage to pick up three points on the road against URA, thanks to skipper Timothy Awany's second half strike.

His overall performance earned him the man-of-the-match honours.

"This is the most impressive win..." - Mike Mutebi says after our 0-1 win against URA FC.#KCCAFC pic.twitter.com/X8lBG97lwD

Head coach Mike Mutebi's troops might have gotten used to peppering their opposition's nets with goals with the ruthlessness of a crocodile ripping apart prey with the effective death roll technique, but not this time.

Nonetheless, a win is a win - and they will take it. Victory also guaranteed the 12-time league champions a top-of-the-table finish at the conclusion of the first round of the season.

Holders Vipers have played two games fewer. But even if they pick up maximum points from their remaining first-round games, they will remain a point behind KCCA at the end of the first half of this season.

Meanwhile, also on Tuesday, Police FC came from two goals down to ensure they shared the spoils of the day with visiting 10-man SC Villa. 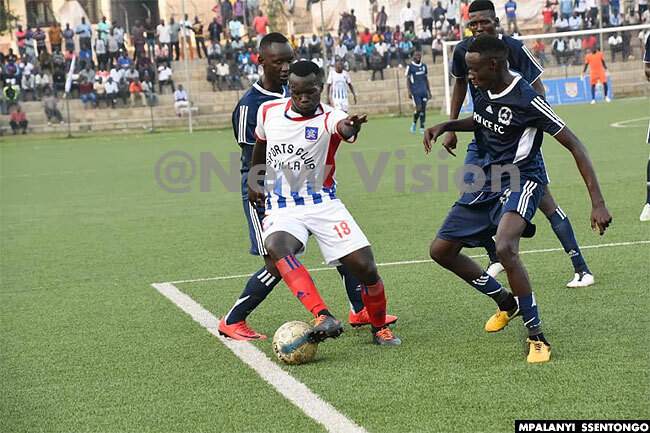 The Jogoo, languishing in the bottom half of the table and courting the dreaded drop zone, meant business as Charles Lwanga gave them the lead at the half-hour mark. But the forward's joy was shortlived when he was sent off for clattering into Paul Willa two minutes after scoring.

The hosts, however, could not immediately make their personnel advantage count. And when Bashir Mutanda was brought down inside the box by Ibrahim Kibumba, the attacker picked himself up to slot home the awarded penalty two minutes after the interval.

But Police were not to become a crumbling house of cards and they swiftly arrested Villa's surge by pulling back one in the 52nd minute through Juma Balinya, before striking again to level matters 10 minutes before time to complete his brace.

The equaliser set in motion an elan for a winning goal - which never really came.

A spirited fightback by Police, who are in seventh, while a missed opportunity for Villa, who have been lagged by a run of indifferent results and lie 12th on the table.

Over 200,000 jobs to be created in Namanve industrial park