Men urged to support wives during pregnancy
Next Story

Where 60 babies are born every day

On top of war, poverty, and a galloping population, the medical staff face a further obstacle: a patriarchal social code of honour.

On top of war, poverty, and a galloping population, the medical staff face a further obstacle: a patriarchal social code of honour.

PIC: Afghan women are assisted during labour at the Doctors Without Borders (MSF) maternity hospital in Khost. (AFP)

The mother was admitted at 9.30am, the birth recorded at 9.35am. Women often arrive in extremis at the Doctors Without Borders maternity hospital in southeastern Afghanistan, one of the most active in the world, with more than 60 babies born daily.

The early hours of the morning are the most feverish for the hospital -- affectionately known by the NGO as "the baby factory" -- just a stone's throw from Pakistan's tribal areas, in Khost province.

The Taliban are active in the region and roads are often dangerous after dark, so when 25-year-old Asmad Fahri felt her contractions begin at night she knew she would have to wait until daybreak to begin the three-hour journey to the hospital.

Finally she is resting, her infant tightly swaddled and asleep between her knees.

On average new mothers are kept in the ward for six hours, but she has asked to leave after just three, to ensure she reaches home before darkness falls again.

Sometimes the mothers have to travel for days, in pain and bleeding, over unpaved, insecure roads in carts or by whatever mode of transportation they can find.

In an opposite wing, the delivery tables continuously welcome newcomers.

Most only have time to lift the long layers of clothing hiding their bodies and wedge their coloured veils between their teeth, too rushed even to change into MSF's standard red pyjamas. 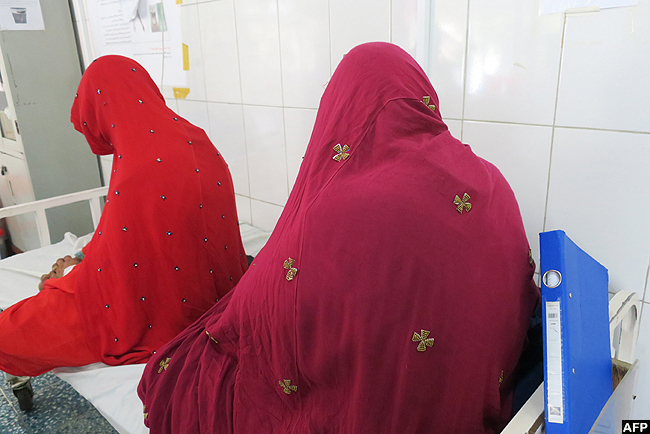 The Khost Maternity Hospital (KMH) opened at the end of 2012 in a medical desert in the conflict-riven country with one of the highest infant and maternal mortality rates in the world.

It was an overnight success, with nearly 12,000 deliveries in its first full year in 2013.

This year the hospital is on track to deliver 24,000 babies, says Dr Rasha Khoury, a Palestinian gynecologist who is medical officer at the site.

If so that puts it within crying distance of the busiest maternity wards in the United States, where the Northside Hospital in Atlanta delivered 27,000 babies in 2016, the highest number in the country that year.

"Here we are saving lives for free," smiles Safia Khan, 24, the assistant manager of the midwifery team.

Behind her, a young mother of twins searches her skirts and hands her a folded banknote. It is a traditional gesture of gratitude after delivery, at times required in some hospitals but politely declined here. "It's forbidden," insists Khan. 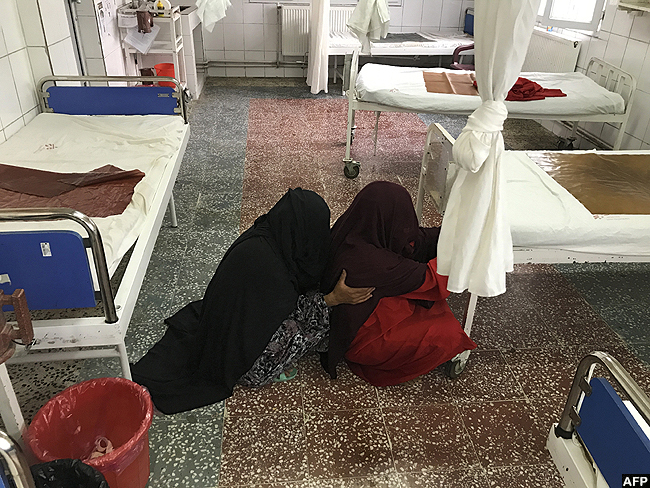 This woman is being supported while in labour

The UN and the World Bank put maternal mortality at around 396 deaths per 100,000 live births in Afghanistan.

Such a decline would mean Afghanistan would have reached its Millennium Development Goal set by the UN some five years early, a study published in the medical journal the Lancet noted in 2017.

The authors of that study say more credible figures released by the Afghan government in partnership with USAID suggest maternal mortality could still be as high as 1,291 per 100,000 -- meaning that giving birth is around five times more deadly for Afghan women than the conflict itself.

If so, it is a staggering figure 17 years after the fall of the Taliban regime, despite billions of dollars in international aid, in a country with one of the youngest, fastest-growing populations in the world.

Dr Khoury says that MSF facilitates around 40 percent of the births in Khost, which has an estimated 1.5 million inhabitants.

But to make a real dent in the mortality rates in the face of these challenges they would need "three hospitals like MSF", she says. 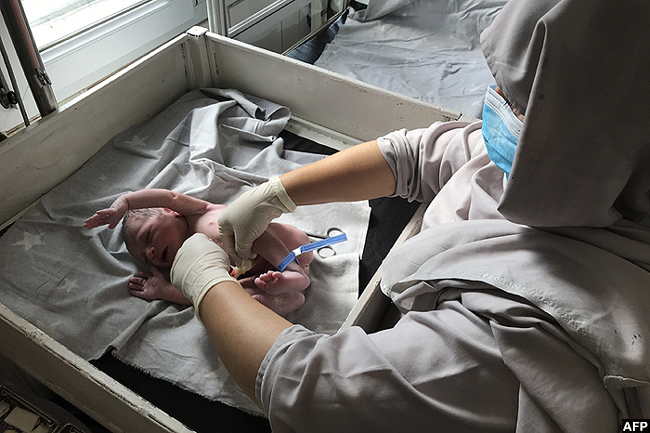 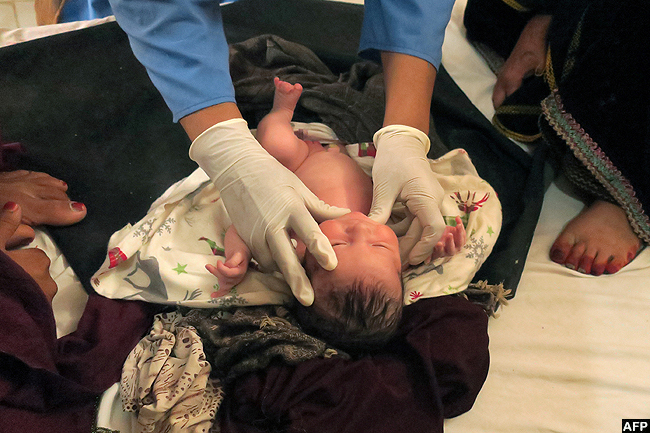 This year the hospital is on track to deliver 24,000 babies 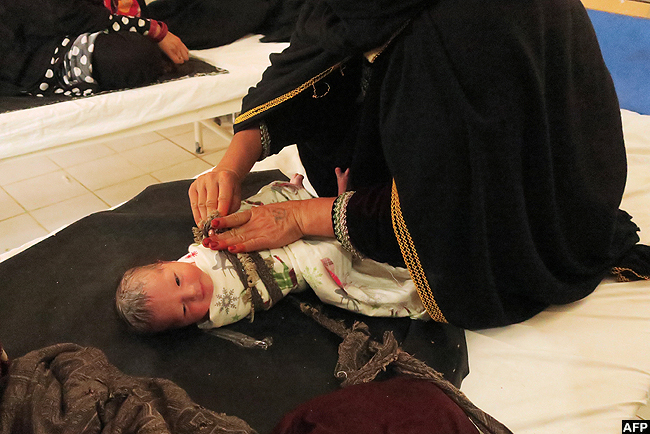 On top of war, poverty, and a galloping population, the medical staff face a further obstacle: the Pashtunwali, the patriarchal social code of honour that dictates life in the conservative Pashtun tribal region where Khost lies.

Under the Pashtunwali the genders must be segregated, and a woman must never show her face to a stranger.

As such, medical staff at the hospital are exclusively female, with the exception of some anaesthetists and the director of the neonatology department.

Even so, a little persuasion has at times been necessary, says Salamat Khan Mandozai, a respected local figure who deals with security for the hospital and has also acted as a community liaison.

"In this rural environment, some women still prefer to give birth at home," he notes. 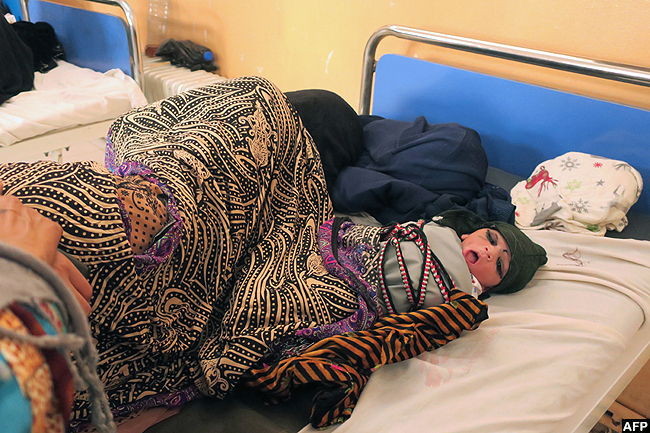 Going to hospital embarrasses them, agrees Safia Khan -- birth is a private matter.

Dr Khoury says the hospital is aware that many women are not coming to them, but adds that the families who do come do so "without hesitation".

For many, she adds, obstacles are not about culture, but finances -- namely, paying for transportation -- or safety and security, especially at night.

Women must also wait until a man of the family is available to accompany them, she says.

But once inside the hospital power returns to the mothers-in-law who escort the patients until they reach the doors of the delivery room.

"We are really reaching people at the margin of the society in Afghanistan," says Dr Khoury. 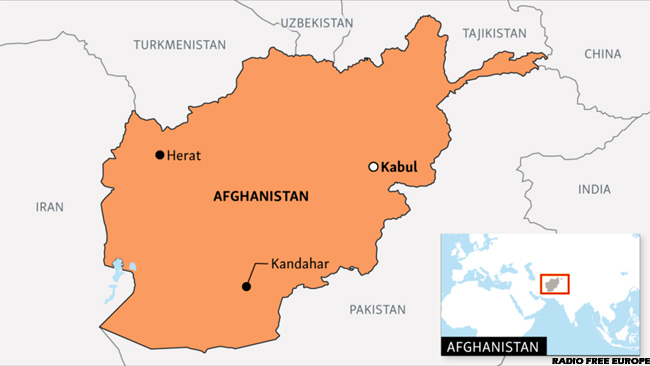 In pictures: The role of midwives

Catholics do not worship idols - Lwanga