Ugandan boxers Regarn Simbwa and Musa Bwogi (pictured) have won their fights at the 2018 Commonwealth Games in Australia.

Ugandan boxers Regarn Simbwa and Musa Bwogi (pictured) have won their fights at the 2018 Commonwealth Games in Australia.

PIC: Musa Bwogi was declared winner over Merven Clair of Mauritius on Saturday. Teammate Regarn Simbwa has also won his preliminary round fight

Ugandan boxer Regarn Simbwa has advanced to the men's 81kg quarterfinal at the ongoing 2018 Commonwealth Games in Australia's Gold Coast.

In a sport that demands speed, skill, strength and stamina, Simbwa saw off his fellow African challenger the round of 16.

On the scorecards, four of the five judges ruled in the Ugandan's favour to earn a deserved win.

On Saturday teammate Musa Bwogi also progressed to the last-eight stage after beating Merven Clair of Mauritius in the men's 69kg round of 16.

Simbwa will next fight Sammy Lee of Wales on Wednesday. The fight will start at 1:47pm Ugandan time.

Bwogi will fight England's Pat McCormack at 1:17pm on Tuesday.

Meanwhile, another Ugandan will also be in boxing action on Tuesday. Juma Miiro will fight Kenya's Shaffi Hassan in the men's 46-49kg quarterfinal at 6:32am Ugandan time. 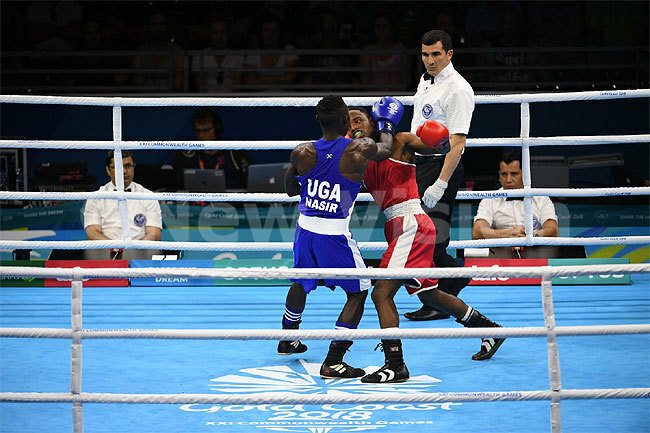 This campaign did not start off on a positive note for the Ugandan camp, after seeing two boxers failing to make it past the preliminary round.

Last Thursday, Kavuma Ssemujju lost to England's Luke McCormack in the men's 64kg round of 32.

Two days later (Saturday), Uganda's boxing suffered yet another casualty. Bashir Nasir was beaten by Swaziland's Zweli Dlamini in the men's 56kg round of 16.

However, later that day, the Ugandan camp had a sense of redemption, thanks to Bwogi's triumph over Mauritius' Clair.

The tide has since changed for Uganda in the boxing faculty, and belief as well as hope for at least a medal remains high.