Home
NEWS
Media
Supplements
Tenders
Notices
"Don't suffer silently; go talk to somebody, reach out to the people. It’s okay to have such issues,"

TORONTO - Although youth and women in developed countries are presented with better opportunities than those in developing countries, they face closely related challenges.

This was highlighted at the recent dialogue dubbed, Breaking the silence youth and women convention 2019, where Ugandans in Canada and those from home gathered to find solutions to various challenges that affect youth and women in North America and Uganda.

The issues raised during the event that took place at Momentum Montessori Banquet Hall in Toronto on September 07, include sexual violence, domestic violence, career challenges, relationships, mental health, racism, teenage pregnancy, and human trafficking, among others. 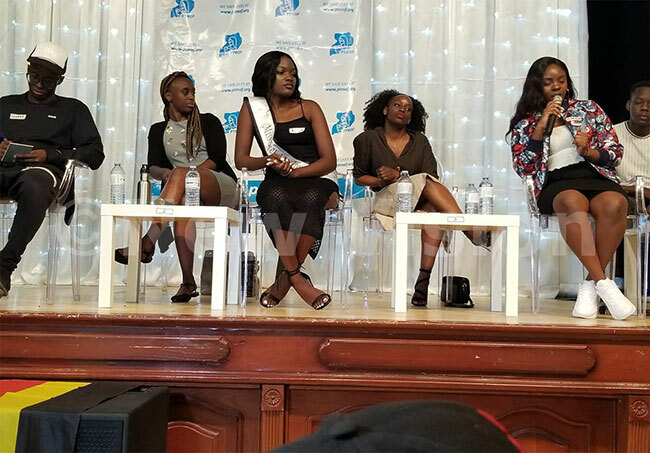 Some of the youths panelists

It was emphasized that those challenges are biting hard on youth and women in both developing and developed countries.

She resorted to working in various entry-level roles and positions to build her professional experience and establish a thriving professional network.

"Eight years later, to God be the Glory, I am now just starting to establish my career path", she said.

Kiwanuka, now a senior policy advisor Government of Ontario, advised the youth never to give up when faced with challenges.  "Had I given up, I wouldn't be where I'm today. Have a passion and a plan but be very persistent," she said. 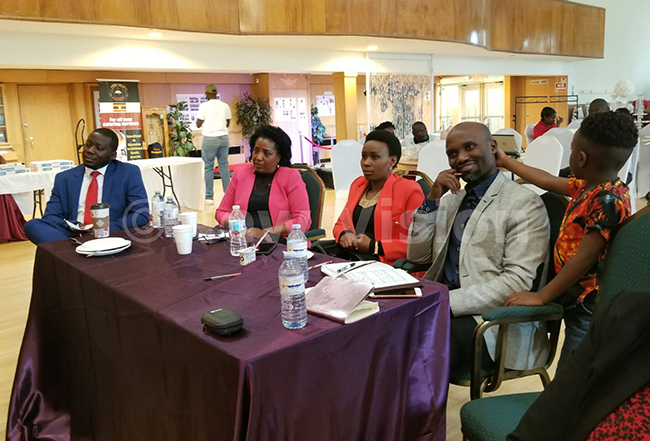 and the event's keynote speaker—  advised the youth to always visualize what they want to be and work towards it.

"In your career, you'll have different paths; it may be a straight path or may have many routes, but the main thing is to focus and make sure you reach your destination without having a second thought about what you want to be," she said. 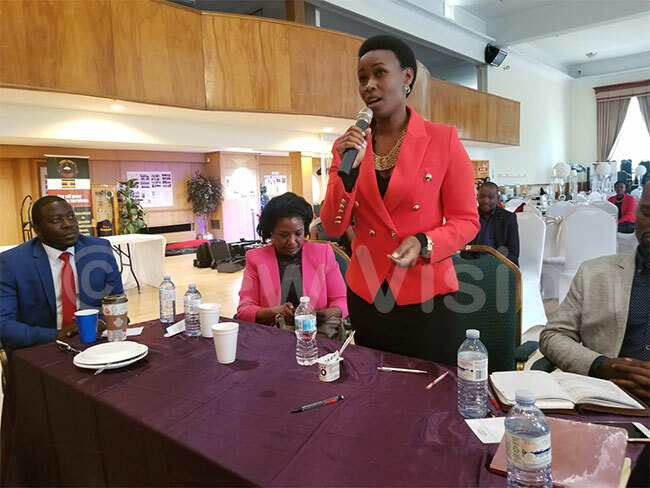 Besides career challenges, sexual abuse was also brought to the fore.

Monday Atigo, former UNAA President, said sexual abuse is real and cited some of the activities that put the youth at risk, particularly sleepovers.

He advised the youth to choose the right friends. "Peer pressure is real; don't be coerced into doing something you're not comfortable with," Atigo advised. 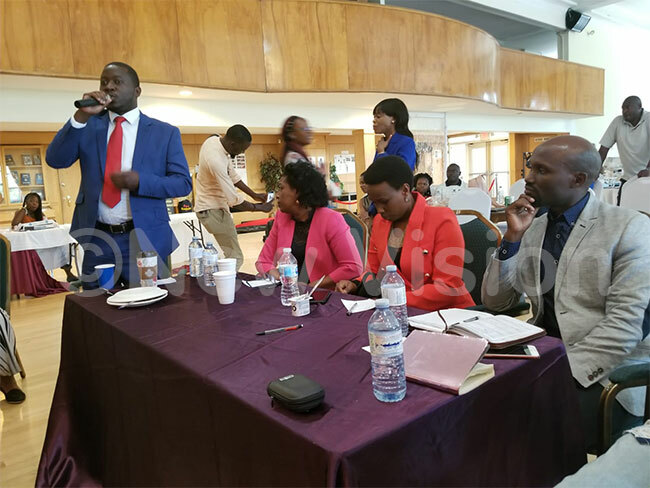 George Kavuma, an interaction designer, also advised his fellow youth to share their challenges with someone for advice.

"Don't suffer silently; go talk to somebody, reach out to the people. It's okay to have such issues," he said. 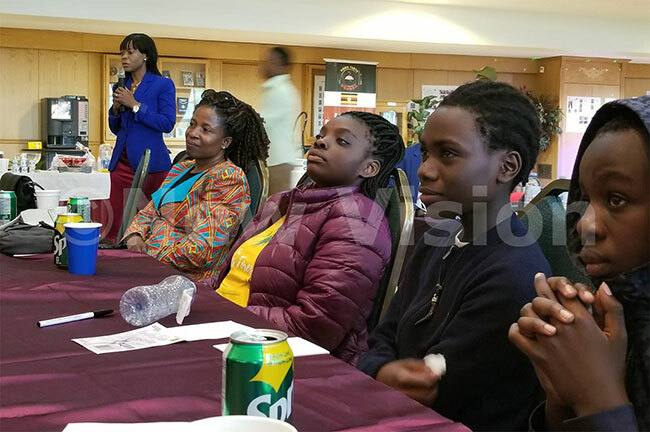 Rev. Eddie Jjumba, the senior pastor Dominion Church International Toronto, re-echoed that the widening communication gap between parents and children should be eliminated.

"Parents listen to your children as though they would say something that you didn't know about," Jjumba cautioned. He also called upon the children to listen to their parents.

On sex abuse, Jjumba advised the youth and women not to blame themselves. 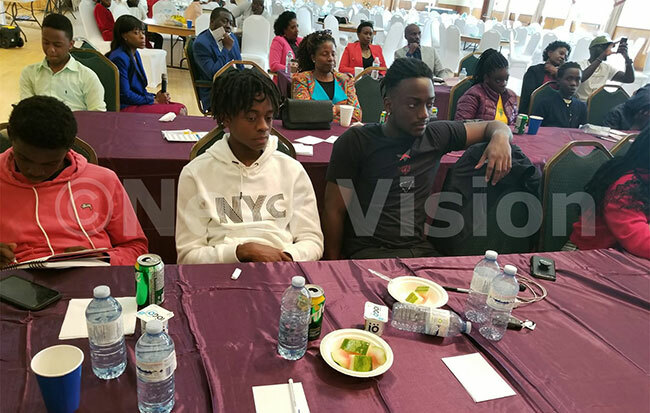 Speaking about the issue of race, Judith Nassuna, a youth panelist, said the youth are faced with disturbing queries with racial undertones. Questions such as: ‘Why you are so dark?  Why do you have acne?' which makes the youth uncomfortable in their skin.

"Kids would commit suicide because they were different or treated differently," she noted. 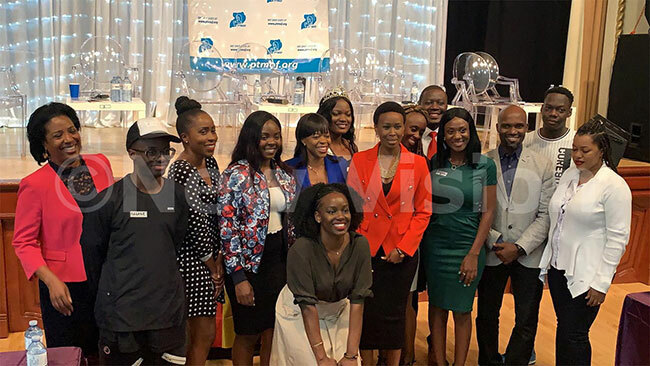 The youth panelists and mentors pose for a picture

Nassuna, however, encouraged youth to be of good courage. "The best thing to do is to be your best cheerleader," she said. 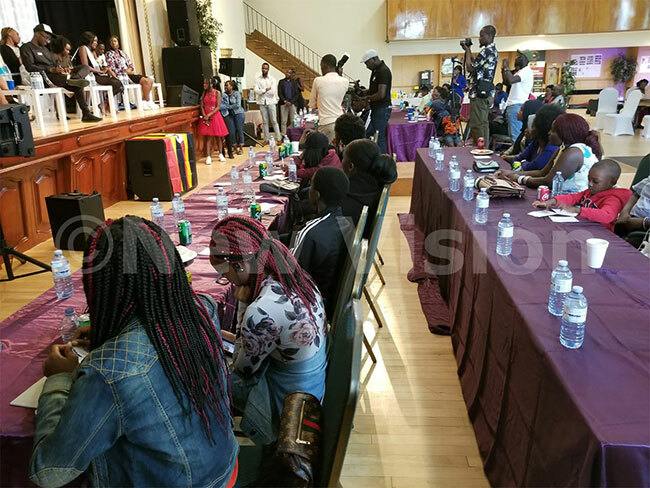 A cross-section of the participants

The event, organized by Pelletier Teenage Mother's Foundation (PTMOF) reached a climax with a dinner hosted by Bukedde's Fifidaqueen aka Fiona Nsubuga.

On the occasion, a discussion on sexual violence against women and the trafficking of girls in the Middle East took centre stage. 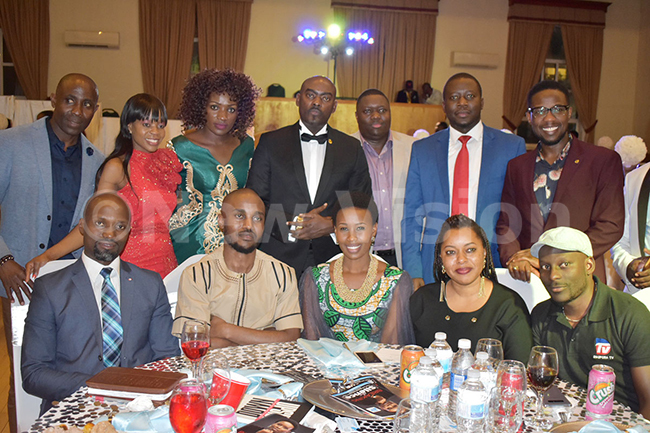 Some of the speakers at the grand finale dinners

Mrs. Kyagulanyi noted that women are assaulted in their homes by people they love so much.

"We must break the silence by dealing with what causes violence like poverty, unemployment, and trafficking of girls to the Middle East," she said.

"It starts with you and me, so if we join our hands together, things like these will stop. We tell the children to speak up, they will but what will we do when they do speak up? How much pressure are we willing to put on the perpetrators?" he asked.

Nsubuga questioned the regulations in place to deal with the culprits and called on everyone to do something.

Fred Mukasa Mbidde, the East Africa Legislative Assembly (EALA) MP, advised the government to enter into an agreement with Middle East countries to iron out issues of torture and human rights violation of Ugandan youths who work in their countries. 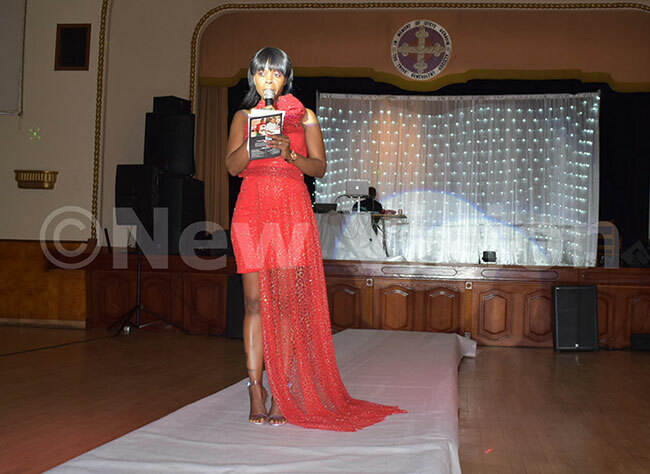 Solome Nanvule, director PTMOF, in her closing remarks advised society to stop judging and blaming the youth when they are sexually abused.

"When girls get pregnant, they are blamed and no one cares to find out whether they were forced or they consented, which leaves them shuttered," she said. 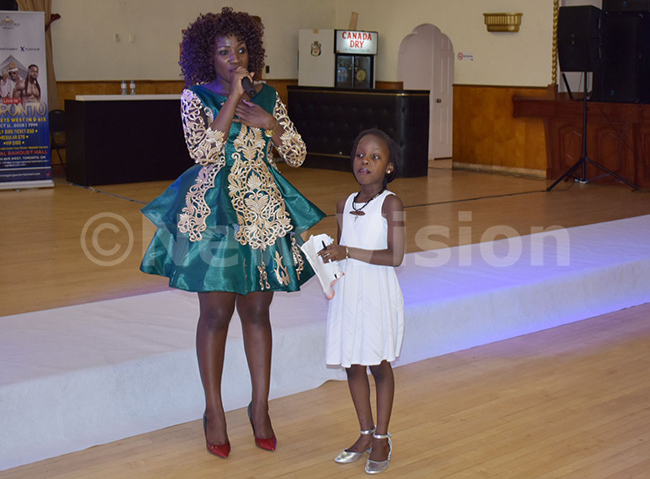 The event was also graced by other notables including Mariam Luyombo- proprietor of Taibah International Schools in Uganda, and Denis Majwala Lukanga, the Mayor of Katwe Butego Central Division Masaka District. 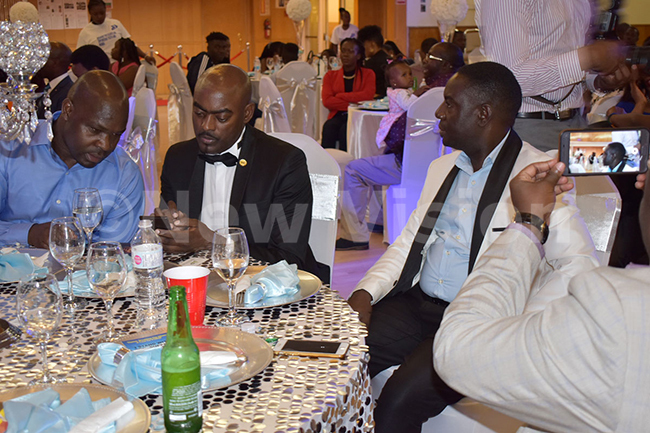 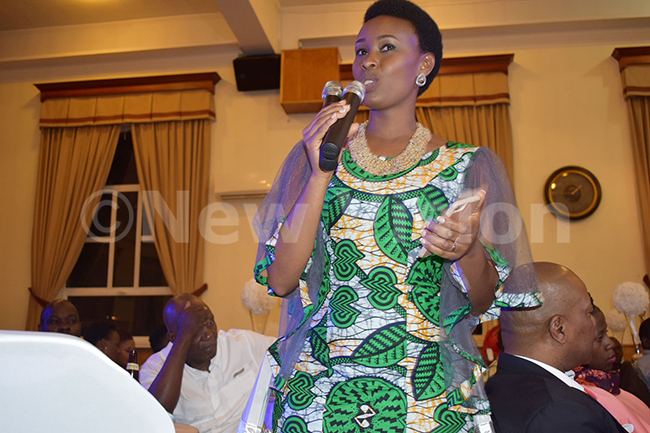 Kyagulanyi addressing participants at the dinner 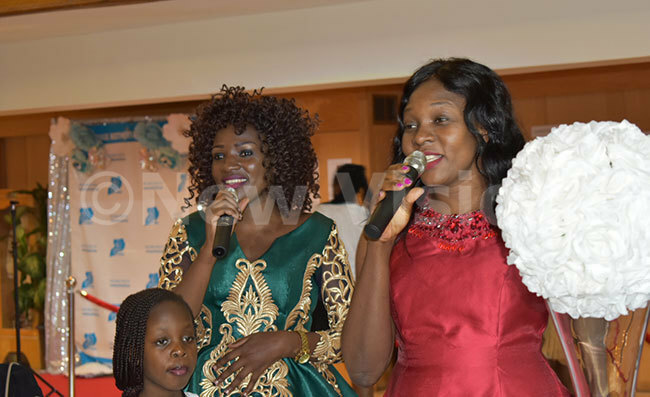 Bukedde's FifidaQueen and the writer Brenda Nakayiwa at the event 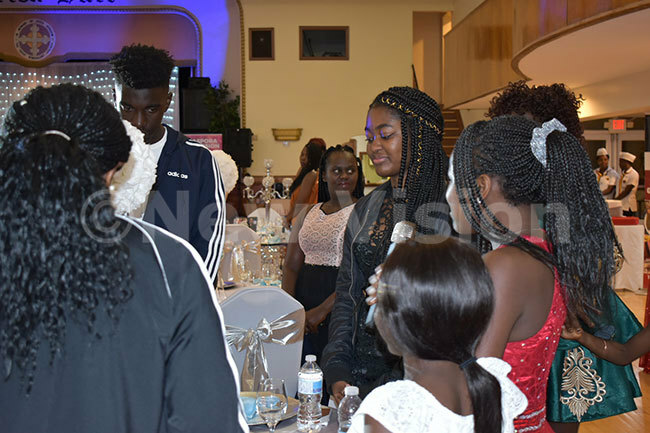 Some of the youths at the dinner 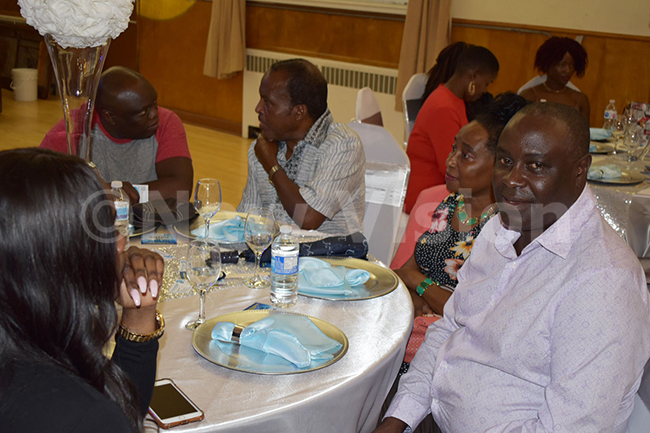 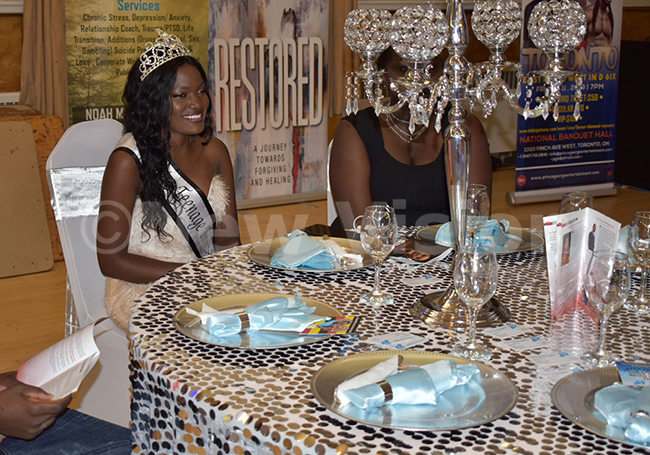 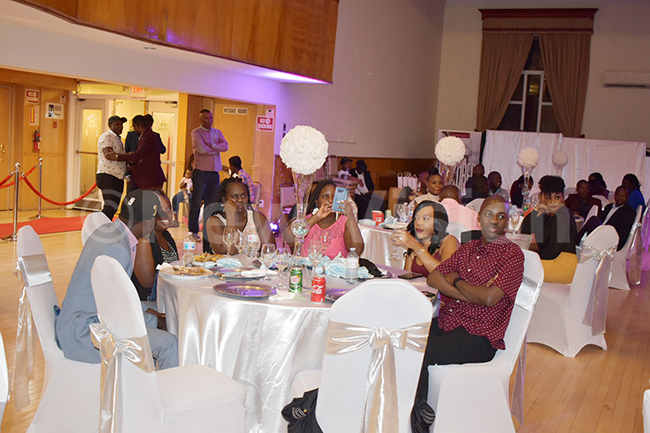 According to the United Nations Population Fund (UNFPA) State of Uganda Population report 2018, one in four teenage girls in Uganda age15-19 have had a child or are pregnant and that 42% of all the pregnancies among adolescents in Uganda are unintended.

The 2016 Uganda Demographic and Health Survey also stated that up to 22% of women aged 15 to 49 in the country had experienced some form of sexual violence.