“We are yet to receive details about who he defamed because the investigators are still analysing his programme recordings."

KAMPALA - The police have arrested Kamagu Omugagga, whose real name is Richard Kasule, a presenter at Kampala-based Top Radio on allegations of defamation.

Kasule was picked from outside the radio station in Bwaise near Christian Life Church, which belongs to Pastor Jackson Ssenyonga, Monday morning.

He had just come out of the studios where he hosts Simbula First Class, a Luganda live show.

Police spokesman Emilian Kayima told journalists that Kamagu was arrested for what he termed as "using his mouth recklessly and defaming everyone".

"He thinks he is above the law," Kayima said in a statement he read to journalists at the Central Police Station in Kampala. A police officer identified as Abwang tells Top Radio manager Dunstan Busuulwa to leave Wandegeya Police Station, where he had gone to follow up the arrest of his  employee.

He explained that the detectives were still reviewing recordings of Kamagu's current and previous statements.

"We shall then go the DPP (Director of Public Prosecutions) to seek legal redress on the matter before charging him."

"We are yet to receive details about who he defamed because the investigators are still analysing his programme recordings," he explained.

Top Radio manager Steven Dunstan Busuulwa said the Police did not inform Kasule's immediate supervisors of the offence he had committed and instead whisked him away. 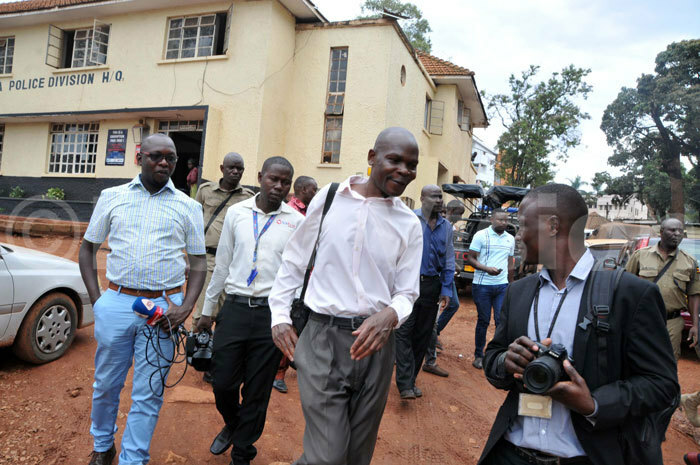 According to Busuulwa, the Police, a few years ago, arrested Kasule, accusing him of inciting violence when he hosted the former Kampala Capital City Authority deputy Lord Mayor, Sulaiman Kidandala.  He was later released and his file closed.

Lawyer Asuman Basalirwa, who visited Wandegeya Police Station in the company of lawyer Yusuf Nsibambi, said that after several attempts, he was allowed to talk to his client, who was still in good condition.

He, however, complained he had not been told about the offence Kasule had committed.

Robert Ssempala, the national co-ordinator of Human Rights Network for Journalists-Uganda (HRNJ-Uganda), condemned the manner in which the Police arrested Kasule, saying it was uncalled for.

"We condemn the Police for arresting journalists before carrying out investigations," Ssempala said.

He said instead, the affected journalists should be summoned, interrogated and sent to court for prosecution other than storming media houses and kidnapping them.

"Journalists are not above the law, but once faulted, they should be subjected to the due process of the law instead of storming media houses to cause havoc," Ssempala said, adding that many were working under fear.

New Vision's Etukuri narrates why he was abducted