Home
NEWS
MEDIA
Supplements
Tenders
Notices
Representatives of PWDS and at the Aids Support Organization offices Mulago on the issues of Women with disabilities who suffer from HIV/AIDS. (Photos by Juliet Waisswa)

By Elvis Basudde and Juliet Waiswa

Positive Women with Disabilities Uganda (POWODU), an organization for women with disabilities living with HIV and AIDS, calls for inclusion and representation at all levels of policy, planning, programming, and service delivery to lessen their problems.

This comes with a view that this inclusion will significantly advance UNAIDS' aim of eradicating AIDS by 2030.

Disability has been identified as a growing issue among people with HIV in recent years. According to the available data, PWDs have an equivalent or even higher risk of contracting HIV than the general population.

Jane Namatovu an HIV patient also experiencing blindness claims that in 2020, she experienced a terrifying encounter that nearly killed her. She recalls with nostalgia, "I was raped by three men!"

They pushed my door open at night, put pressure on my neck, and repeatedly raped me until I passed out. "I discovered that I was both pregnant and HIV-positive later," she recalled.

However, because of the greater vulnerabilities experienced by disabled women, and girls, there are more risks of contracting HIV due to the susceptibility to sexual assault, less access to information about HIV prevention, care, and treatment, and occasionally face stigma. 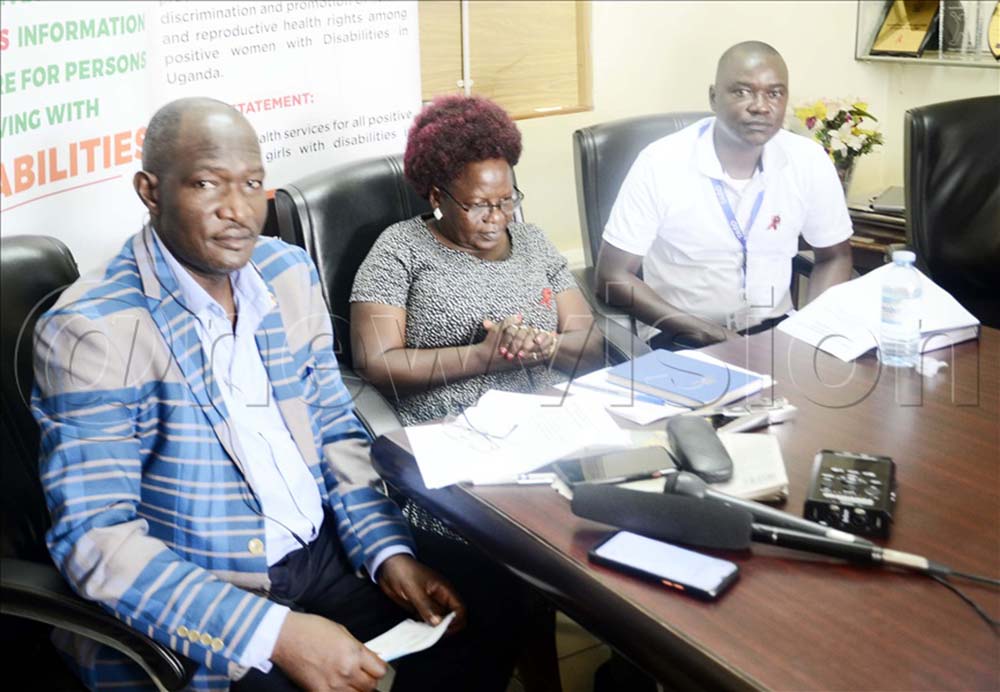 The POWODU request to increase inclusion from the Ministry of Health and other parties, including the Uganda AIDS Commission, UNAIDS, GFATM, and PEPFAR, claiming that they are excluded from many facets of life.

They understood the urgency of incorporating these disabilities as soon as possible into national, local, and corporate planning and development programs in the areas of health, education, politics, security, and economic empowerment.

At a recent press conference held at the Mulago TASO headquarters in Kampala, the executive director of POWODU, Betty Kwagala, emphasized that although efforts have been made to include all people affected by HIV and AIDS in the fight against the epidemic in Uganda, women, and girls with disabilities have somehow been unintentionally left out.

Given the intersectional barriers to HIV services that women and girls with disabilities and HIV experience, Kwagala further noted that these groups have not been given priority as a vulnerable community.

She continued by saying that the difficulties are made even more difficult by the scarce resources and coverage/reach of services for social support and protection, HIV prevention, care, and treatment, and WWD living with HIV in Uganda.

Additionally, the inclusion of WWD living with HIV and AIDS in national HIV programming is still tokenistic in form and is accompanied by disorganized, dispersed networks and organizations for WWD living with HIV. According to the 2019 Disability Monographic Study from the Uganda Bureau of Statistics (UBOS), 14% of the country's 40.3 million people have a disability, with 15% of women and 12% of men. This corresponds to around 5,643, 000 disabled Ugandans.

According to Charles Byekwaso, project manager for the Uganda National Association of the Blind (UNAB), the most vulnerable people are those who are visually impaired since they only pay attention to other people's voices.

Since they cannot read, they miss out on important information, and since they cannot purchase brails either, he claimed that the mainstream HIV and AIDS messaging is in newspapers.

According to accounts, certain blind people, particularly girls and women, are occasionally raped and, paradoxically, used as sexual objects, making them particularly susceptible to HIV and AIDS.

When you go with someone who has a good voice but you can't see them and who is HIV positive, you wind up becoming infected. Therefore, Bwekwaso added, "We are quite susceptible to HIV/AIDS."

According to Dr. Shaban Mugerwa, the secretariat for the Equity Plans Hearing Committee, girls and women with disabilities might be categorized contextually as invisible groups of people with disabilities because of cultural prejudices that place an additional burden on them. They are dealing with a double-edged sword brought on by gender-based violence. According to estimates, one in five women has a disability.

Kwagala praised TASO Uganda for all the assistance and direction that allowed the provision of accessible services to reach PWD clients and PWDs living on the streets.

The National HIV Equity Plan, which emphasizes the predicament of PWDs, particularly the women with disabilities living with HIV as the primary vulnerable communities, was put in place by the Uganda AIDS Commission and Ministry of Health, she added.

POWODU appeals to funding and implementing partners to give preference to disability-specific programs and projects to increase the inclusion of PWDs and people with disabilities in HIV and AIDS activities.

According to Kwagala, the effective application and direct participation of PWDs and their organizations in HIV and AIDS-related activities at all levels will be made possible. This will also serve the additional goal of attracting traditional needs among the traditional AIDS service provider organizations and donors.

We also urge media outlets to look into and report on the widespread human rights abuses against women with disabilities who are also HIV-positive, as well as to share inspiring tales of WWDs who are coping with the virus and their families.