NTUNGAMO - President Yoweri Museveni has assured the Private sector that the new campaign to rejuvenate the grassroots into modern agro production will see high returns that must be exploited by the private sector through value addition for export.

“The campaign which is on now, the Parish Development Model (PDM) is aimed at bringing the 68% of Ugandans who are by-standers in development, to get involved in economic transformation. What is coming is an earth-shaker! Before, leaders did not know how to lead.

They thought that leading is carrying the burden of their people! Leading is showing the way so that they follow. Those with small acreages of land will select enterprises that have big returns like coffee, fruits, poultry, piggery etc. With intensive agriculture, people can use their small land to get out of poverty,” the President said.

Museveni was, Friday speaking during the second Bi-annual Presidential Chief Executive Officers Forum (PCF) which he hosted at his country home in Irenga, Ntungamo District. 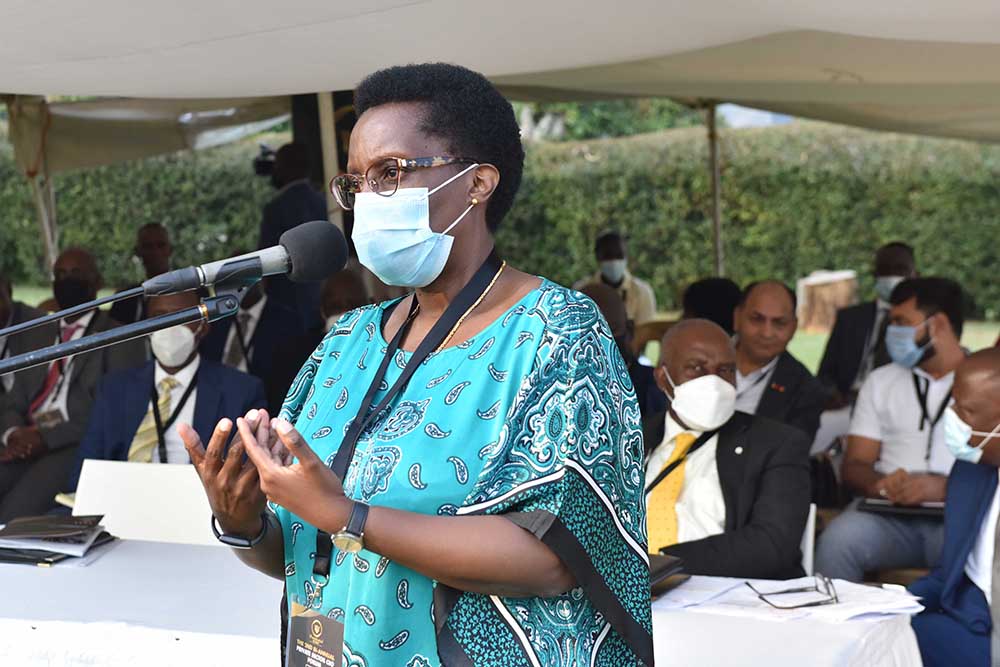 The meeting was held under the theme, “Positioning the Private Sector for New Markets and Business Opportunities for Sustainability and Thriving Economies in the Region and the African Continent".

The President, who was accompanied by his wife who is also the Minister of Education and Sports Hon. Janet Kataaha Museveni said the aim is to convert Ugandans who are bystanders in the economic transformation struggle into participants.

“We want them to do so with a ‘calculation’ for increased production. The Private sector will be overwhelmed. In Bushenyi, Dr. Muranga used to get 5.3 tons of bananas but now gets over 53 tons, over ten times because of fertilizer and irrigation.

Before you were dealing with limited mobilization of the masses, but with this grassroot mobilization, it will be massive,” he said, adding that he wants the Private sector to tie their presentations with government’s plans.

Museveni said the Private sector is the easiest way to develop the economy because companies do the work of government cheaply. 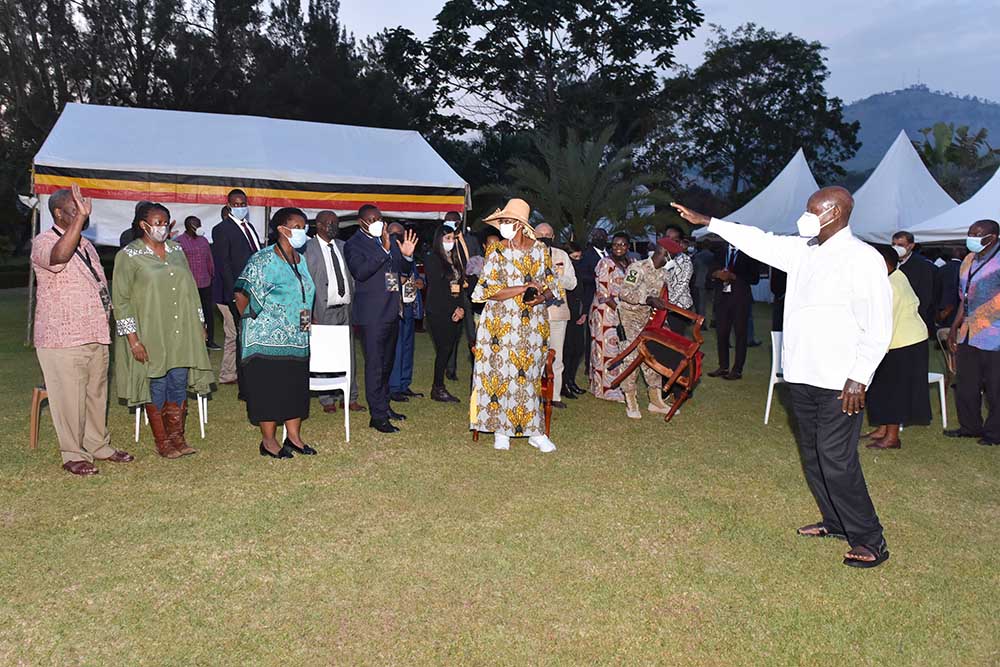 President Yoweri Museveni in the Presence of the First Lady/ Minister of Education and Sports Janet Museveni waves at CEOs.

“For instance, the government is not the one looking after our home here. We do it ourselves and in the process we produce bananas and milk for you in Kampala to consume happily.

That's why we are encouraging the local people like the father of Barbara Mulwana, we also brought back our Indians the ones who had been chased by Idi Amin. If you want to have some government companies you can have them but they shouldn't interfere with the private sector," he said.

Among other things, the President pledged to promote the protection of local products from Chinese and Indian subsidized products, provision of cheaper power for production, and cheap financing for the Private sector to borrow and support KACITA.

“We are committed to that. I was not willing to finance KACITA but they are now pledging to do more export of our products than imports. If KACITA can sell internally and export we can support them,” he said.

The President and the CEOs discussed in-depth the issue of exploiting the vast trade potential with DR Congo including the provision of an export credit guarantee, expanding power to DR Congo, funding the Uganda Air cargo, construction of toll roads into DR Congo and empowering the National Broadcaster UBC to broadcast across the border.

They also discussed the issue of appointment of a commercial attaché who can speak various languages to Uganda’s foreign missions, lifting the ban on Facebook to allow online business since URA has now put in place mechanisms to tax online businesses and provision of cheap power for production. 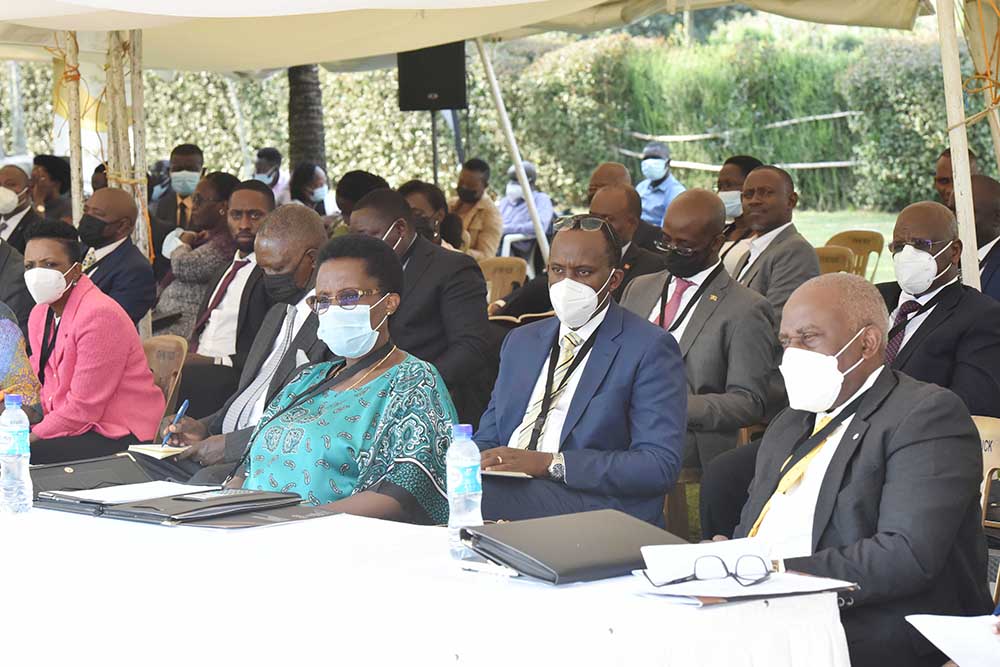 The Prime Minister Hon. Nabbanja Robinah briefed the President on the country-wide awareness about the PDM and said people are generally excited and anxious to finally undertake enterprises that will put money in their pockets.

The Minister of Finance, Planning and Economic Development Hon. Matia Kasaija informed the CEOs that government is financing local actors through Uganda Development Bank and therefore they should visit there when need arise.

He urged them to work together to resolve any technicality appropriately.

Ms Barbara Mulwana, the Chairperson of PCF on behalf of the CEOs said that PCF mission is to promote, harness and popularise the private sector involvement in providing a platform that advocates for appropriate legislation, practices and policies that eliminate bottlenecks to economic development.

Ms Mulwana noted the forum proposes to highlight the need for strategic positioning of Uganda's Private Sector for new markets and business opportunities that can foster economic transformation.

She said their focus is on exploiting new market opportunities, Oil and Gas sub-sectors, and private equity to speak to capital availability and African continental free trade area.

Mr. Emmanuel Katongole the Vice Chairman of PCF assured the President of their solid support for the economic development of the country and added, that his great leadership has enabled Uganda to move to a middle-income country.

Katongole thanked the President for the good road infrastructure and new technology like that of Kiira Motors manufactured in Uganda. 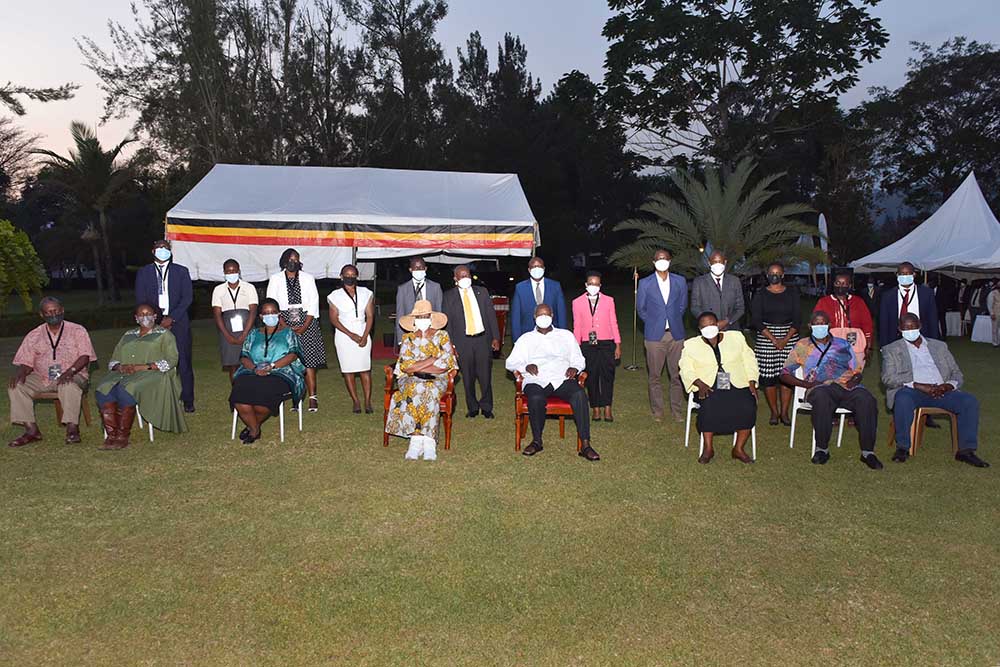 “Entrepreneurship is developing and unleashing the power of enterprise to unite our country. We can develop without aid. Aid should be good if it ends future need of aid,” he said.

President Museveni launched PCF in 2020, noting that the Forum will help the government to identify bottlenecks to business and economic growth in the country.

The meeting was attended by Prime Minister Nabbanja Robinah, Minister of Finance, Planning and Economic Development (MFPED) Matia Kasaijja, the Minister of Trade Industry and Cooperatives (MTIC) Hon Mwebesa Francis and Keith Muhakanizi Permanent Secretary in the Office of the Prime Minister (OPM).