For a while, the 21-year-old was given an artificial eye, which is known as a stock eye or ekiiso ky’endiga in Luganda.

It is normally given for cosmetic reasons so that the person does not look one-eyed.

However, it does not see. Nassira says the stock eye did not help much because it could not move and looked very different from her normal eye.

“It remained evident that I was one-eyed and this attracted stigma that I have been dealing with for long, especially at school. Then I met Dr Wasswa, who made for me a customised eye that brought back my beauty. For now, I really love myself,” she says.

Dr Franklin Jack Wasswa Kalibwani is the only Ocularist in Uganda.

An Ocularist is a person who specialises in the fabrication and fitting of artificial eyes for people who have lost an eye or eyes due to trauma or illness.

The only one in Uganda

Wasswa, whose office is located on Queens Road in Entebbe town, not only makes artificial eyes, but also customises them to the type and complexion of the other eye to look closer to normal. 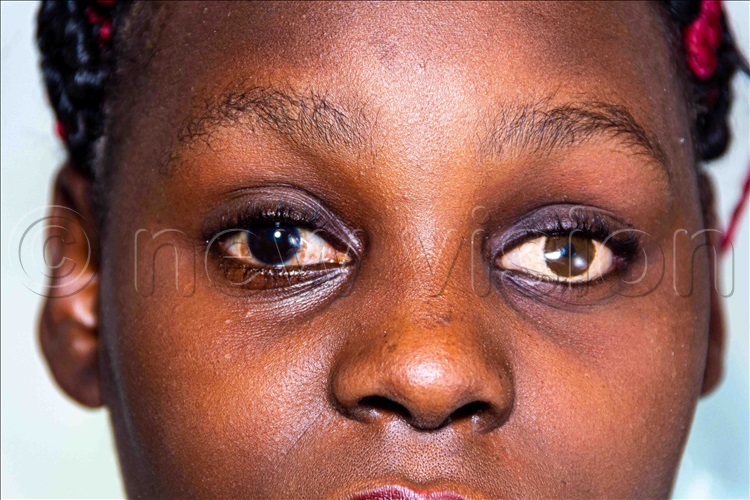 Nassira has a customised artificial

He was approved by the American Society of Ocularists after studying all aspects of ocular prosthetics for seven years and spending another five in practical training.

“We create artificial eyes which are scientifically known as ocular prostheses from medical grade plastic acrylic or cryolite glass,” he explains.

“For the good of humanity, I should not be the only one in Uganda. The challenge is that here there is no well constituted and operational ocularist with governing associations.

“To become an ocularist in the US, it takes seven to 10 years. Unfortunately, there is no university in the world that teaches ocularistry. It is leant through apprenticeship, where the association grants the diplomat title to teach others. They carry out exams every year to be sure they are on the right track,” Wasswa explains.

He says the fabrication process for a custom-made eye includes taking an impression of the eye socket, shaping a plastic shell, painting the iris and then fitting the artificial eye.

In addition to creating the prosthetic eye, an ocularist shows the patient how to care for and handle the prosthesis. 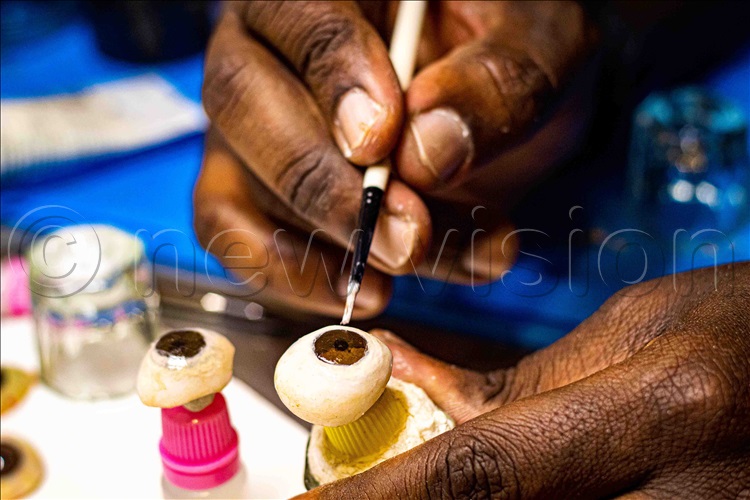 “Ocularists may develop their skills from various background disciplines such as medical, optometry, dental, nursing, biology, medical arts and illustration. One actually does not have to have a medical background. All you need is the will and patience because it takes years to become a good cularist”, he explains.

Wasswa says he has tried to train other people, but they lack patience and drop out often after a month.

“This is why I am still the only ocularist in Uganda. I still have hope to get more. I am planning to set up a training centre at Ruharo Hospital in Mbarara, which is well known for treating eye problems,” he says.

Wasswa developed his love for medical practice from his interaction with doctors.

“My dream of becoming a doctor started in Primary Three at Entebbe Kindergarten Association, when I developed a hernia and a very friendly doctor took me for surgery.

I also had a dental problem that made me visit a dentist, Dr Muwanga, regularly. These doctors handled me with good workmanship,” he recalls.

Wasswa says he has remained close to Muwanga and that is where he got his inspiration to become a doctor.

“From my Primary Seven, throughout high school, I loved biology. I would even read medical books. I wanted to do dentistry,” he recalls.

Wasswa, however, studied physics, chemistry and biology, with a subsidiary of food and nutrition at A’level, before being admitted at Kyambogo University for a bachelor’s degree in science technology — biology.

“I did not like what I was studying. I seriously wanted to do medicine. After the first semester, my parents realised that I was not happy. They agreed to take me to the US to study what I really wanted. I thank them because this was the best decision of my life,” he says.

Nevertheless, Wasswa still did not get the medical course he wanted.

He was given physiatry, a branch of medicine that aims to enhance and restore functional ability and quality of life to people with physical impairments or disabilities.

The course was for seven years, but after three months, he applied to change to ophthalmology, a branch of medicine and surgery which deals with the diagnosis and treatment of eye disorders.

“I was referred to oculoplastic externship. I was advised to apply for mascara facial anastology, which is a combination of making the artificial eyes and facial repair. The training has three modules which would be an equivalence of a PhD, but I have so far finished two and had it not been for COVID-19, I would be studying the third module,” he explains.

The art of artificial eyes

Wasswa says much of the artificial eyes in Uganda are procured from India without regard of who the user is.

“Many Ugandans use them because they may not be aware that customised eyes can be made locally. Others say they are cheaper, but end up being unhappy with their looks because the eyes look so different from their functioning ones. Some shapes do not even fit,” he says.

To make a customised eye, Wasswa takes measurements of the eye socket.

He squashes a material in the socket to get the shape that he uses to measure and then duplicate the final shape of the eye.

He then paints the eyelid using plates with colours of the particular client because, he says, Africans’ eyes have a lot of detail.

To get the best look, he uses oil paint.

“I use heat-cure to make the eyes and balls. With this material, the eye is hard enough, it cannot break even when it falls down. The moulded shape is put in a heating machine for 12 hours to make it hard. After boiling, it is polished to get all the corners well done,” he explains.

Paying particular attention to the other normal eye, Wasswa then paints — the colour and tone, the veins and all the other details that a layman will not notice.

“The eye muscles are assisted to lock onto that ball, which is like a marble, so that when the muscles move, the ball moves too.

This gives a good cosmetical picture as the eye moves,” he says.

Wasswa says making an eye ranges from sh600,000 to sh2m, depending on the disease that killed the eye.

He also says it takes him one day to make an artificial eye.

“Under normal circumstances, I take four visits to a patient. The first visit is for measurements and shapes, the second is to take the pictures of the other eye for painting and the third visit is for trying in the complete eye,” he says.

The doctor says within one week, the patient may forget that they have an artificial eye and they may not need to take it out until there is need for repolishing.

“Usually, we advise them to bring it back for polishing after six months,” he says.

Artificial eyes do not fit perfectly. They leave pockets behind that collects discharge from the tears and this can cause infections. That is why they need regular cleaning.

“An artificial eye can be used for up to 10 years and a minimum of six years. However, for the children, it can be modified according to how it develops by adding on top of the old one,” he says.

Wasswa says he uses material certified by the Food and Drug Administration in the US because it is what the ocularists in America use.

“Since the National Drug Authority (NDA) does not have its governing protocol, I prefer using American material, where quality is guaranteed. NDA can always come and inspect the material. I am always with papers,” he says.

In future, Wasswa plans to build a big modern eye centre, where he will make artificial eyes on a large scale for everyone who needs them.