Theft, including of animals in the countryside, has been added onto the category of crimes that President Yoweri Museveni argues do not deserve the right to bail.

He said development projects aimed at alleviating poverty in the country would be in vain if village theft is not dealt with decisively to deter occurrences.

“The issue of bail, especially for murder and village thefts, is the one which can affect the growth of the economy. Village thefts which are not punished promptly and firmly will make people give up. Even these cows which we give them, if they are stolen, how will the Parish Development Model succeed if we don’t resolve the issue of village thefts because people are not going to keep animals indoors under lock and key,” Museveni said.

He warned that if politicians and the justice system do not side with the people to firmly deal with murders and village thieves, “people are going to continue taking the law into their own hands and kill all the thieves”.

President Museveni made the remarks on Thursday during the closing ceremony to induct the new Cabinet he appointed after his January 2021 re-election.

The President was flanked by the First Lady and Minister of Education and Sports, Mrs Janet Museveni.

The two-day induction organised by the head of Public Service and secretary to Cabinet, Lucy Nakyobe, was themed: Securing the country towards social economic transformation.

The Vice-President, Maj. (rtd) Jessica Alupo, said the induction included sessions on Cabinet business, branding and communication, etiquette and self-management, budgeting and legislative processes, diplomacy and the centrality of security in governance.

“There is also the problem of servant disloyalty. Can you imagine my workers tried to steal my cows? Therefore, we need effective justice at least for some of the crimes, but not all. Yes, land matters can take long, but murders and village theft should be dealt with firmly. The law is clear; for murder, the bail is 180 days and others 60 days, so, let the Judiciary be strict without being inhuman,” Museveni said.

Prompted by the recent wave of murders in the Greater Masaka area that have left at least 26 people dead, Museveni has variously told judges and parliamentarians that the law books need to be reviewed to tighten the right to bail to protect victims and the spread of criminality.

For years, Museveni has argued against bail, albeit with little success, but insists that during this tenure, hesitation from politicians will not deter him from putting the matter to a referendum for the population to have their say.

Most often, stating that his hard stance on bail is anchored in the belief of the biblical Mosaic law of “an eye for an eye”, Museveni previously said the tight grip on bail should be for murderers and the corrupt, but has now included to the list, village thieves.

In the past, the President had argued that sentencing murder convicts to life imprisonment is an ideological departure from the death penalty envisioned in the Penal Code Act and it must be addressed.

He said the bail issue that has attracted mixed reactions from activists and politicians will be high on the agenda for discussion in a special Cabinet meeting today at Kololo Independence Grounds.

The President said once the Government gets at least seven million people vaccinated against COVID-19 to confidently aid safe reopening of the entire country, including the education and entertainment sectors, the country will pick up and the target is to accelerate economic growth by at least 7%.

He, however, added that this will only be possible if there is zero tolerance to corruption, minimal government borrowing and reduced cost of electricity to encourage production.

“Borrowing so much for our budget is a mistake. We collect about sh41 trillion in taxes, but of that, sh16 trillion goes to paying debt... I have seen Uganda Revenue Authority (URA) celebrate, but I asked them what they are celebrating yet our tax to GDP has for so long stagnated at about 12%, yet we need at least 20%,” Museveni said.

The President said whereas the governance structure has the political wing, if the civil service is strengthened, the country can be stabilised and propelled to economic growth.

“It is the civil service that should guide the country on a constitutional path. Here we have radios and televisions that don’t play the national anthem, but we have a head of civil service waiting for Museveni. They leave the President to quarrel with everyone, but you should be firm. If someone wants to overrule you (civil servant) tell them to do so in writing,” Museveni said. 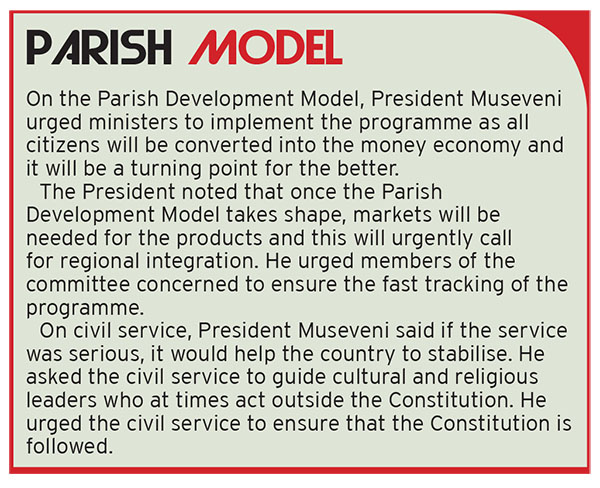 President Museveni assured the nation of security, saying nobody will disturb the peace of Uganda unconstitutionally.

President Museveni told Cabinet of the need to lower electricity tariffs to 5 US cents that will attract many investors who are willing to come and open up factories in Uganda.

He said with these guidelines, the economy of Uganda will gallop.

Last month, Chief Justice Alfonse Owiny-Dollo called for dialogue on the matter of bail. He said the presiding officer must be sure that the person applying for bail will return to court after being temporarily freed, adding that in some instances the communities have turned against such an accused person.

“It is the duty of the judicial officer to look at the entire circumstances when considering bail. There are instances where grant of bail may work adversely against the applicant, we know of cases where people have taken the law into their own hands and consigned beneficiaries of bail to their graves,” Owiny-Dollo said during the Judiciary’s fourth lecture in honour of former chief justice Benedicto Kiwanuka at the High Court gardens in Kampala.

He said there was supposed to have been a meeting between all the judicial officers and the President before the COVID-19 pandemic disrupted business.

“It is my hope that sooner than later, an opportunity will present itself where we can have frank, meaningful and useful discussion about this subject and others,” Owiny-Dollo told the President, who was chief guest at the event.

Following the decision of the Supreme Court in Suzan Kigula’s case, the death penalty is no longer mandatory for murder convicts.

The judges have the discretion either to condemn the convict to death by hanging or long prison sentence.

The ruling also introduced a new element that if a convict is not hanged within three years after the death sentence is confirmed by the Supreme Court, the sentence automatically reverts to imprisonment for the natural life of the prisoner.