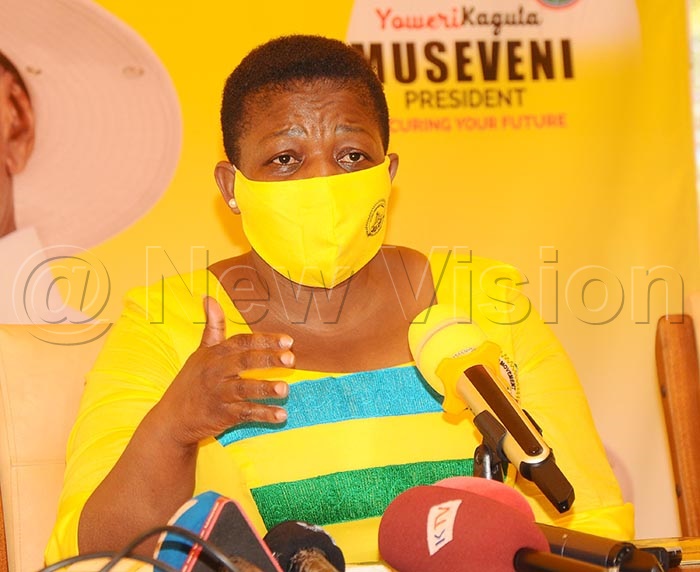 Kyagulanyi commonly known as Bobi Wine was on Wednesday last week arrested by the Police in Luuka, for violating coronavirus restrictions, after holding a campaign rally of more than 200 people.

Following his arrest, his supporters in Kampala and elsewhere, stormed the streets protesting his arrest and demanding for his immediate release from Police custody.

However, addressing a press conference at the Party headquarters on Sunday (November 22, 2020), Lumumba called the protestors economic saboteurs saying the riots which led to the death of over 30 people and destruction of property had greatly affected people's businesses.

Lumumba, who regretted the death of innocent people, also condemned the attack on security forces by rioters saying security officers sacrifice a lot to ensure safety of Ugandans.

She said; "The people in uniform are our sons and daughters, who went to look for employment to serve this country. People in uniform who suffered the wrath of the rioters on behalf of the NRM party I must say sorry for what happened, but we condemn such actions".

Justifying police's action in handling the riots, Lumumba said it is the responsibility of the government to protect Ugandans and their property during unrest.

"As far as I know the people in charge of the state, they won't look on as you sabotage the economy, because it is the responsibility of the NRM party or government to protect Ugandans and their property," She said.

Meanwhile, in a light moment, Lumumba who celebrated her 48th Birthday yesterday was surprised at the press briefing when a group of young men surprised her with a birthday cake in the middle of the briefing.

To celebrate her birthday, Lumumba was joined by her colleagues Rose Namayanja, Mathias Kasamba, Rodgers Mulindwa who sung her birthday songs as she cut her cake.