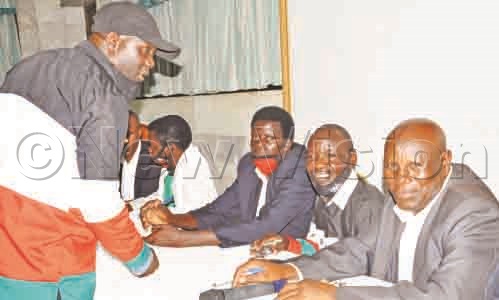 Under the "six friendly political parties" alliance, the party leaders told journalists at the Grand Imperial Hotel in Kampala, on Thursday, November 19,  that the decision to back Museveni was not for selfish financial gains as may be perceived, but to ensure their own growth.

The group coordinator and secretary-general of LDT, Zaid Mukasa Wasswa said they have established structures from the grassroots to the national level, which will be used to mobilise support for Museveni. "We may look small, but NRM knows what we are going to do," he said. The decision to back Museveni, Mukasa said, was made in December last year, at a meeting of all allied group members.

He clarified that the parties were not dissolving into the NRM, but would work as independent entities.

Mukasa said in order to have peace, unity and stability, good governance and development, they found no harm in rallying behind Museveni in a manner acceptable and justified in a free and democratic society.

The strategic plan of the group in the period 2021-2026, Mukasa said, is to strengthen member parties in a manner that would enable them to compete favourably in 2026 on all elective positions while taking advantage of the prevailing peace ushered in by the current leadership.

Segujja Wamala, the leader of NPP, said they were backing Museveni because he has programmes to transform peasant farmers. The NRM director for mobilisation, Mathias Kasamba, who was represented by Kiggundu Kabandwa, from the NRM secretariat, welcomed the group, saying NRM was an all-embracing party. "We shall move together. Let us work together and win," he said.

He said today NRM government has a number of opposition figures serving in different capacities because President Museveni is not only an embracing leader but is exceptionally strong and good. "We will not allow our country to go into the hands of someone whom we well know cannot manage it," he said. The parties are fully registered with the Electoral Commission.