A new study on the impact of Coronavirus lockdown on uptake of essential health services has revealed a shocking decrease in hospital visits, antenatal and safe delivery at health facilities.

The report, which considered key health services noted a 14% decrease in hospital visits, 26% increase in baby born deaths and a 98% decrease in HIV testing. The decreases were calculated in comparison to the same time last year. Other areas studied were reproductive, maternal, newborn, child and adolescent health in Uganda. The study, which covered April to June 2020, also unearthed the impact of the April lockdown on the health service uptake of malaria and HIV services.

The survey was a collaboration between UNICEF, Dalberg Data Insights and Makerere University School of Public Health.

The lead researcher, Dr. Simon Muhumuza, of Makerere University School of Public Health, said it covered all the districts of Uganda. Researchers used an interactive web-portal to provide real-time data for monitoring delivery and utilization of essential health services, based on data from the District Health Information Software.

According to Dr. Muhumuza, the initial findings were released in July but the report is currently being updated to capture data for up to end of September 2020.

"The general objective of this publication is to provide evidence-base for strengthening health system capacity for continuity of essential health service provision while responding to the coronavirus pandemic. Specifically, this brief intends to inform the design of actionable insights to trigger quick corrective actions for the Ministry of Health, districts and partners supporting the COVID-19 response and continuity of essential health services," he said.

On 12 January 2020, the World Health Organization (WHO) confirmed a novel coronavirus in Wuhan City, China, and declared it a pandemic.

In Uganda, the first case of COVID-19 was confirmed on 22 March. But, 4 days before that, Government announced a lockdown on 18 March. Public gatherings including places of worship, pubs, weddings, music shows, rallies and cultural meetings were suspended. Foreigners and Ugandans arriving in the country were put under 14-day mandatory quarantine. This affected uptake of essential services but there was no empirical record.

By August 9, when the first person died of Covid 19, Uganda had 1,283 coronavirus cases. By November 9, three months later, Uganda had lost 133 people to Covid 19 out of 14,574 total confirmed positive cases. While this is just less than 1% of the death as a ratio to the positive cases, coronavirus has had a far more extensive damage to other sectors than death of infected people. The study considered uptake of essential health services. 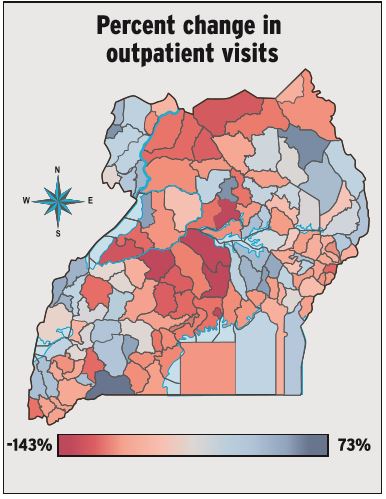 The decline in health facility visits may be attributed to the restricted movements, ban on both public and private transport, staff shortage and reduced health facility operating hours or closed out patient care in some health facilities

However, in Isingiro, Maracha and Kotido, the effects were negligible.

"Because of the lockdown, coverage and utilization of essential health services was affected by accessibility and economic challenges. Suspension of transport and community health services inconvenienced many, especially women from accessing the facilities. It was worse in the rural areas where distance to facilities remains a key challenge. Transport restrictions also hindered healthcare providers, either by not reporting to work or reporting late," Dr Muhumuza said.

"Some members of the district health teams told us they suffered stock-out of essential medicines and commodities during the national lockdown. They said two delivery cycles were delayed during the period. Even when the late deliveries were made, very few items were supplied, causing a critical shortage of essential health medicines, supplies and commodities," he said. 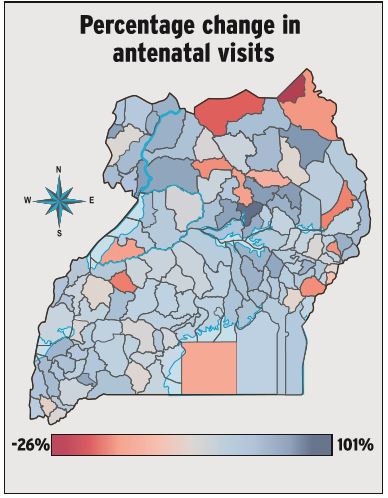 Across the country, the number of women attending their first Antenatal care visit decreased by 10% in April and increased by 15% in June 2020, compared to April and June 2019, respectively. The 5 top districts with the highest drop in Antenatal care visits were Karenga (-26%), Lamwo (-17%), Kibaale (-12%), Nabilatuk (-11%) and Tororo (-9%). Most of the districts were affected except Dokolo where the effects were minimal 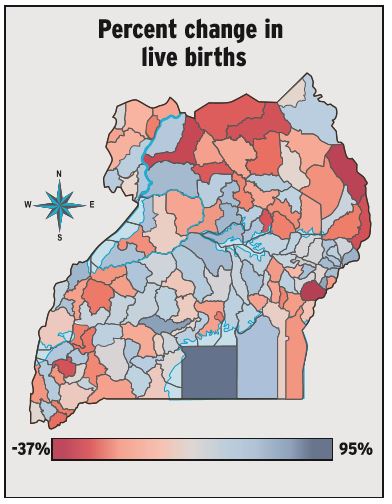 Many newborn babies could have been lost because of the difficulty in accessing health facilities, staff shortages at health facilities and increased home births. Other reasons are reduced elective caesarian sections and decreased antenatal visits.

This was a general effect except, minimally in Kalangala district. 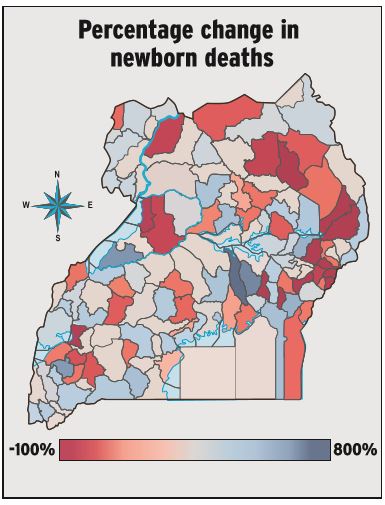 Researchers were able to determine newborn deaths, which occurred out of health facilities and those which occurred at health facilities after a live birth. Compared to April 2019, newborn deaths dropped by 15% in April 2020 but increased by 26% in June 2020, compared to June 2019 (Figure 7). Districts with 100% increase in the number of new born deaths were Abim, Bududa, Bugweri, Bukedea, Buliisa and Butaleja. Othere are Kitagwenda, Luuka, Nabilatuk and Nakapiripirit.

The district which was hardly affected was Kayunga. 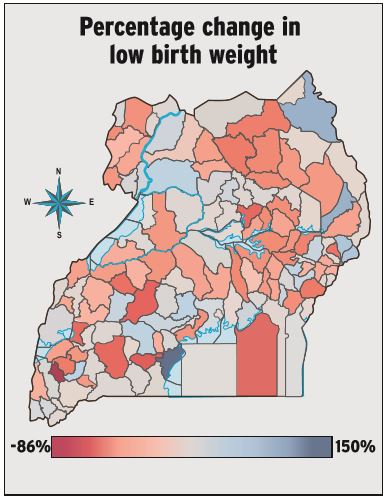 Another parameter which was captured was Low birth weight. This is a proxy indicator for poor maternal nutrition. Across the country, the number of children with low birth weight increased by 16% in April and by 6% in June 2020, compared to April and June 2019, respectively.

The 5 most affected districts with the highest increase (>100%) in the number of children with low birth weight were Masaka, Nabilatuk, Kaabong, Bukwo and Kween. The least affected was Mitooma. 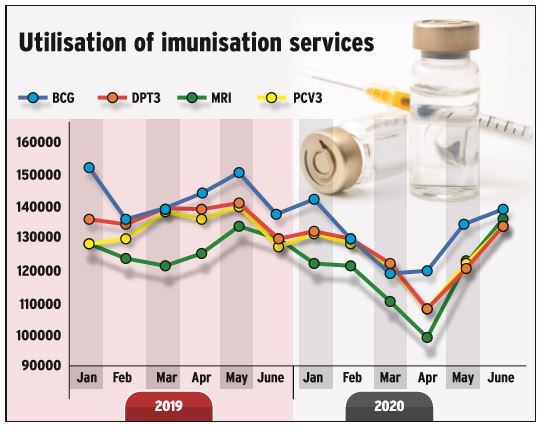 Data shows that Karamoja region was the most affected. According to some District health officials interviewed, the interruption of community outreaches through which the majority rural and vulnerable communities are reached could have affected access to immunization services. Further, access to the facility-based vaccination was restricted by the ban on public and private transport. The drop in vaccination coverage may be linked to periodic outbreaks and needs to be addressed, particularly in Karamoja region. 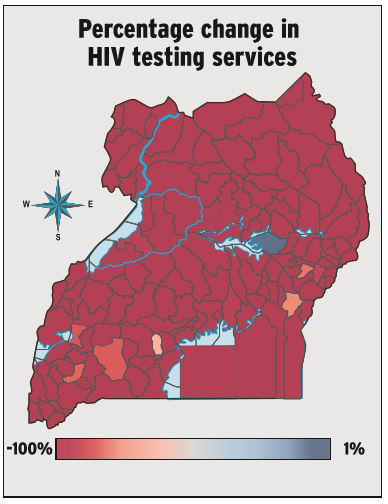 This was the most affected service, nationally. The number of individuals receiving HIV testing services decreased by 98% in June 2020, compared to June 2019. With the exception of Serere district, there was significant drop in HIV testing nationally. 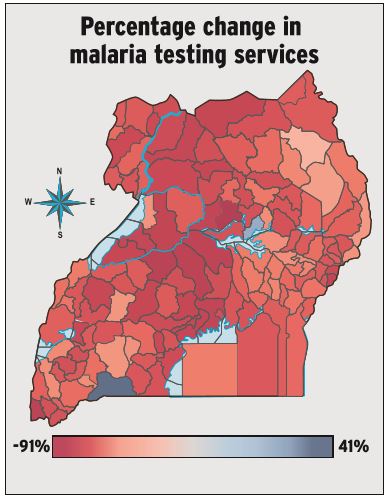 Malaria testing services were also was affected nationally but not to a similar extent. The number of individuals receiving malaria testing services  reduced by 65% in June 2020, compared to June 2019. Save for Kaberamaido and Isingiro districts, the rest of the districts experienced significant drops in the number of individuals testing for malaria in June 2020, compared to June 2019. 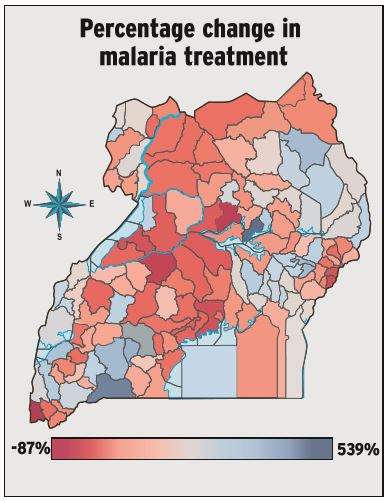 Isingiro and Kaberamaido were least affected. 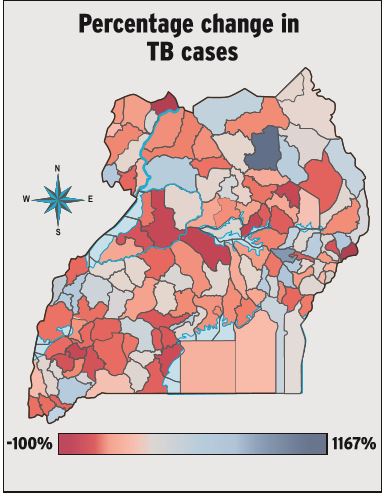 Dr Muhumuza observed that, following the easing of movement restrictions, access to and utilization of services are gradually improving and districts are embarking on a wide-range of strategies to salvage performance in key health service delivery indicators.

"Key among the recovery strategies are the resumption of integrated outreach activities and mobilization of the population through community structures such as the community health workers, civil society organizations and community-based organization to seek health facilities. We were told that key partner interventions have also been restored, and so have special clinics for reproductive, maternal, newborn, child and adolescent health services and HIV testing," he said.

Other structures, which have helped to restore essential health service delivery were resumption of peer and community health workers, normalizeation of the supply chain, and redistribution of essential health supplies as well as workers to areas with critical gaps.