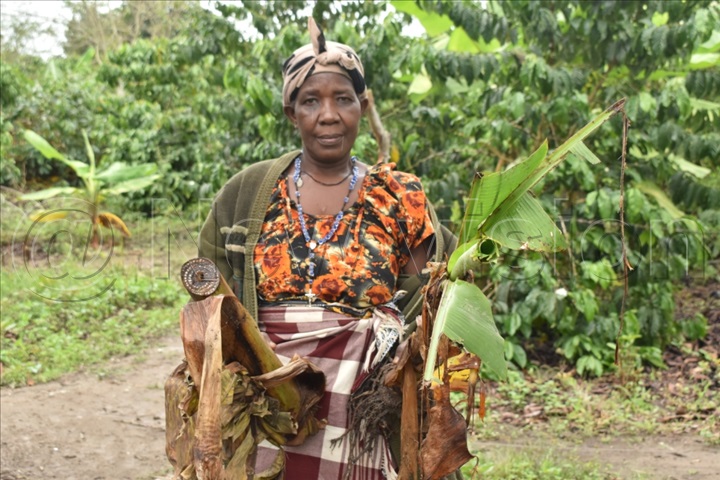 For permaculture to thrive or become policy in Uganda, it will require putting indigenous agricultural practices at the front before industrial agriculture.
TOP News STORY
Sun Nov 01 2020 .
How permaculture revives exhausted soils for food production

For permaculture to thrive or become policy in Uganda, it will require putting indigenous agricultural practices at the front before industrial agriculture.

Wilson Ssenyondo, a resident of Kabaale village, is among a few farmers in Kasasa sub-county, Kyotera district, Uganda, who have managed to restore their fatigued land for sustainable food production.

He has managed to revive nearly two acres of land on which he grows banana, cassava, vegetables-egg plants, cabbages, sukuma wiki, beans, and groundnuts to list a few.

He renewed the land through permaculture, a form of farming where you recycle every element that creates life in the soil.

You can simply add compost manure after soil loosening in addition to environment-friendly practices such as consistent mulching and carbon farming.

Kabaale A is one of the communities in the district with a long history of being hard-hit by persistent dry spells.

In such a situation crops wither and a few existing water sources dry up. At some point, the livestock farmers are forced to trek long distances in search of water and pasture.

They are characterised by scorched and hardened soils, while others by sandy and stony terrain in addition to the high rate of deforestation.

Considering that state, one does not expect to find much farming in these communities. But as you approach the villages, you cannot help but marvel at the lush green gardens containing different crops.

But amid all these pressing challenges, some crop and livestock farmers have learnt how to adapt and look for ways for survival.

Ssenyondo, also the Chairperson of Sanje Farmer-To-Farmer's Permaculture Cooperative (SSFPCoop), is among the 20 large-scale and small-holder farmers who were trained how to revitalise exhausted soils for crop growth.

The training was organised by Broadfield Enterprise Uganda in 2019 to enable willing farmers to produce food and supplement their incomes while saving the environment through good practices.

"The cooperative has more than 100 members from different villages who have restored more than 120 acres of land in two years. The twenty farmers were trained to train others in their respective communities," Ssenyondo said.

Each member trained four willing farmers and the number grew to 80 people.

The members share ideas on how to improve their soils as well as saving some money every month which they borrow to buy agricultural inputs.

"While residents in the affected communities waited for government food rations during the Coronavirus lockdown, people who had restored their soils and planted crops had enough food in their stores and gardens," Ssenyondo explained.

The farmers, in addition, plant the improved Napia grass (elephant grass) from the National Agricultural Research Organisation (NARO) to feed their cows and goats at home.

The grass takes about seven-eight weeks to grow yet easy to propagate according to the farmers.

Brian Ssebuliba, another farmer in Sabina village, has managed to restore over a three-acre-piece of arid land where he grows bananas, vegetables, and fruit trees.

It was completely bare in 2008 but he made it suitable for farming.

Rose Nakyaze of Nakagongo village restored fertility in her one acre of land which she had deserted for over four years since it could not yield any crop.

It was red with a rocky texture.  She used to buy vegetables and food from the market which was expensive in terms of daily expenses.

"Currently, I grow a variety of vegetables, groundnuts, beans, bananas, and others to feed my family. Besides, I make and sell briquettes which contribute to my daily income while I conserve trees," she recounted.

Augustine Samula, the Cooperative's Secretary, grows bananas, beans, sukumawiki, rosemary plant, red-hot pepper, and other crops on the two acres he restored in Kabano A.  In addition to rearing cows, goats, pigs, and poultry that provide him manure.

He constructed contours to trap and channel run-off water into his land.

"The dry spell is still a common challenge but only a few farmers can escape it through water harvesting, caring for the land and tree planting," he noted.

Since they rear goats, pigs, and poultry,  they collect compost manure and use it in making the soil healthier to support vegetables, beans, eggplants, coffee, and others.

The three farmers including Mauricia Nakayinga of Kyamyungu village, Annet Nango (Kabano) and Joyce Nanteza of Kabaale B, apply mulching, inter-cropping, and trapping water and trees planting to help their exhausted soils to regenerate fertility.

The organisation has held several trainings in permaculture and awarded the participants with certificates.

In 2016 November, the said land was parched and hard and could not absorb or retain any rainwater for a minute. "It was bare without trees, and the winds were too dry. We could not produce anything on such infertile land," he recounted.

However, the unending challenge drove Mugarura to start a demonstration unit to learn resilient practices on food production by making the poor soils useful.

He told the New Vision that permaculture projects are being scaled on about 254 acres in the Eastern Part of Uganda (Jinja and Bugerere districts) to support food production in areas affected by climate change.

In order for permaculture to thrive or become policy in Uganda, he pointed out that, it will require putting indigenous agricultural practices at the front before industrial agriculture. It is simply because permaculture embraces integration of environment- friendly technology or proper use of farm machinery and other equipment.

He appealed to the Uganda government has to stop the use and importation of chemicals and instead invest in innovating organic pesticides and promoting it. "Restricting the use of polythene to paper packaging material,"

Mugarura explained that permaculture is different by design than any other form of Agriculture.

"Organic farming is growing food without chemicals rather than designing. In permaculture we work by principles, principles of design, attitudinal principles, and ecological principles," he added.

However, Dr. Moran Gamble, the Director -Australia Permaculture Education Institute, who was the lead trainer, said permaculture is a reliable and most practical way of making a difference in climate change through resilient farm designs.

"Climate changing will rage on and on. Therefore we have to be aware of that and we have to design food systems that have the resilience," she noted.

Nevertheless, the training programme which is held every year was postponed due to the COVID19 pandemic interference.

Being a new type of farming, Ssebuliba says permaculture has challenges ranging from resistance from some farmers who use chemicals to trap quick money.

Others are inadequate labour force to manage farm work, lack of financial capital, lack of enough water for irrigation in addition to prolonged drought among others.

Lack of money to buy tanks to store rainwater is still a challenge, especially among the new farmers in addition to pests and diseases that affect crops and animals.

Jamiru Kiyinji, the Kyotera District Natural Resources Officer, attributed the changing climate in the district to persistent environmental degradation which affects the soil quality and the agricultural sector.

He explained that the population keeps increasing yet the land doesn't expand which forces people to encroach on the wetlands and forests for settlement and different economic activities.

"Our eviction operations have been suspended due to the current political atmosphere and we are to resume shortly after the 2021 elections. We have already given notices to people who encroached on wetlands and forest reserves," he added.

Maria Ssemussu Nassejje, who heads the Kyotera District Production Committee, told us that they are willing to support all farmers practicing permaculture.

"Since it is a new project, it has few farmers and it has not spread out to a bigger part of the district. But once the permaculture research expands then we shall integrate it in the district programmes as a special project," she said.

In order to minimise climate change effects and food problems and poverty among farmers, the government through the Ministry of Water and Environment (MoWE) in collaboration with the Ministry of Agriculture, Animal Industry and Fisheries (MAAIF), set up various solar-powered irrigation schemes to farmer groups in five districts.

The five-year pilot schemes worth over sh2bn were set up in Kalungu, Gomba, Mityana, Kagadi, and Wakiso districts to enable farmers to water their crops during insufficient rain supply in a dry spell and support sustainable agriculture.

According to Eng. Gilbert Kimanzi, the Commissioner- Ministry for Water and Environment/Water For Production, the five projects are meant to reduce various challenges sparked by the changing rainfall patterns and to improve crop yields to fight poverty.

Unlike subsistence farming, he explained, these enterprise irrigation projects are focusing on putting money in a farmers' pocket by expanding market their yields and products.

Environment experts have on many occasions advised farmers at all levels to avoid relying upon rainfall but to go beyond the usual efforts and adapt irrigation.

This is a viable alternative that supplies water to crops for sustainable food security, improved incomes, and livelihoods.

"If the pilot schemes succeed, then the ministry will extend to different rural communities across the country," Kimanzi said.

The story was written with the support of Africa 21 Association as part of the Media and Journalism Days in Africa 2020 training on Climate Change.