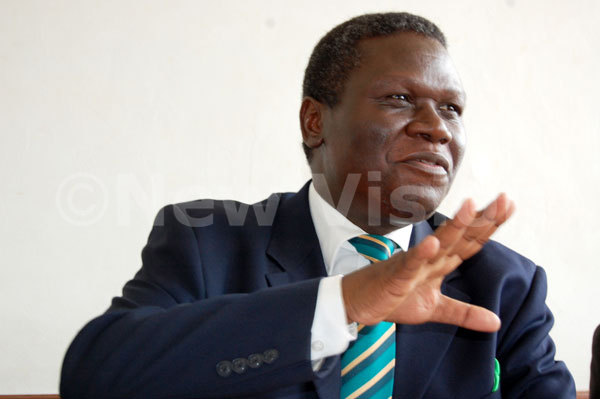 The Democratic Party has requested the Electoral Commission to have their candidate Norbert Mao nominated on Monday, November 2, 2020.

In a letter seen by New Vision to the Electoral Commission, by the party's secretary General Dr. Siranda Gerald Blacks, he says, "Mr. Chairman, you being the returning officer for the Presidential Candidates in Uganda, the Democratic Party wishes to book with you the nomination of Hon. Norbert Mao, its Presidential Candidate on Monday, November 2, 2020 at 11 am. We request you accept the stated date and time…"

The letter, the Electoral Commission confirms, was received on Thursday, October 28, 2020.

However, at the time of this request, the DP has not submitted their forms with signatures of voters supporting the candidature of Mao, as an aspirant for the Presidency on their party ticket; on Friday morning (October 30, 2020), as required by the law.

But, the party's national spokesperson, Okoler Opio Lo Amanu, when asked whether he believes there will be enough time to have his candidate cleared for Monday, he said, "That is the EC's problem to work fast. It is not our problem. We have made a request and we hope it will be respected."

He has been president of the Democratic Party since 2010, and he served as the Local Council V chairman for Gulu District.

From 1992 until 1994, Mao worked as an associate attorney in the offices of Kabugo and Company Advocates, a Kampala-based law firm. Between 1994 and 1996, he worked as a legal counsel for the Legal Aid Project of the Uganda Law Society in their Gulu office.

In 1996, he was elected to the Parliament of Uganda, representing Gulu Municipality. While in parliament, he served on the Legal and Parliamentary Affairs Committee and the Public Accounts Committee.

He resigned from Parliament in 2006 and was elected chairman of Gulu District; and years later elected to head DP as the President of the party.