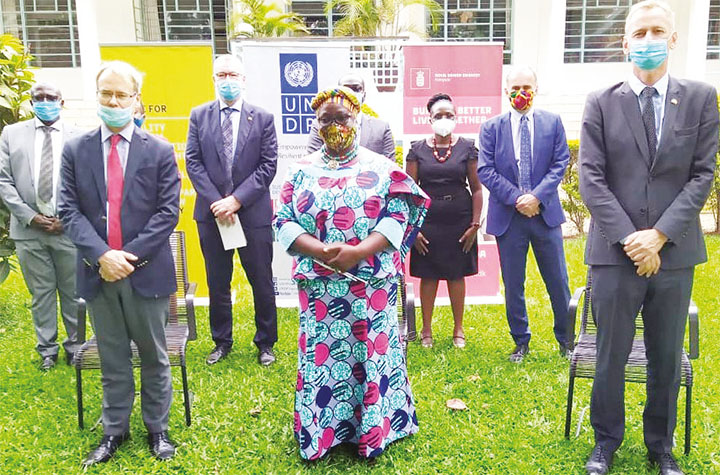 Swedish Ambassador to Uganda Per Lindgärde, while speaking at the function, said the strategic goal of the Embassy of Sweden is to support Uganda's efforts towards strengthened democracy, free and fair elections, and increased respect for human rights.

Peaceful, transparent, and inclusive elections, with an increased participation of women and youth, is crucial for Uganda's sustainable development, the ambassador observed.

"Through supporting UNDP's Strengthening Electoral Processes in Uganda project, Sweden will assist and support Ugandan institutions, the civil society and political parties in ensuring fair, open and peaceful elections in 2021," Lindgärde said during the signing ceremony.

Lindgärde said the support was part of Sweden's wider foreign policy initiative to ‘Drive for Democracy' and bolster democratic processes by supporting electoral authorities and strengthen political systems."This contribution is aligned with our development strategy in Uganda and complements the work of the Government of Uganda and our programmes with other partners involved in the areas of human rights, democracy and rule of law and gender equality," Lindgärde said at the function held in his offices.

Both the Swedish and Danish governments will each contribute $1m (about sh3.7b) to the three-year project that runs from 2020-2022 under UNDP, which is working with the UN Women, the UN Office of the High Commissioner for Human Rights and the United Nations Educational, Scientific and Cultural Organisation in implementing the project in close collaboration with the UN Resident Co-ordinator's office. The total budget of SEPU is $10.5m (about sh39b).

Through its support to the SEPU project and the Democratic Governance Facility, Denmark is able to assist Ugandan institutions and civil society organisations in ensuring fair, open and peaceful elections in 2021.

The UNDP Resident Representative, Elsie Attafuah, commended the Swedish and Danish governments for the partnership and the exceptional leadership of Lindgärde and Petersen in promoting democratic governance.

She lauded both governments for the dedication illustrated by their contribution to the SEPU project in this crucial period in Uganda.

She said the project is part of UNDP's mandate to strengthen democracy and governance in line with the 2030 Agenda for Sustainable Development, Goal 16 which promotes peace, justice and strengthened institutional capacity.

The project will also foster equal participation and empowerment of women in the electoral process, which is aligned with Goal 5 on gender equality.

Attafuah paid special tribute to the Government of Uganda for the ongoing partnership with the UN on sustainable development agenda including a range of efforts to strengthen rule of law and democratic governance in Uganda.

Other donors to SEPU project are Norway, Austria and UNDP who have collectively pledged $7m to the project. Iceland is also expected to give support. Uganda will hold a general election between January 10 and February 8 next year.

"We believe in strengthened democratic processes, where by rule of law, protection and observance of human rights, as well as citizen inclusion are key elements," the Danish Ambassador to Uganda, Nicolaj H. Petersen, said.

He added: "The aim is to contribute to Uganda's Vision 2040, which emphasises that good governance and respect for human rights are fundamental principles at the core of the nation's development.