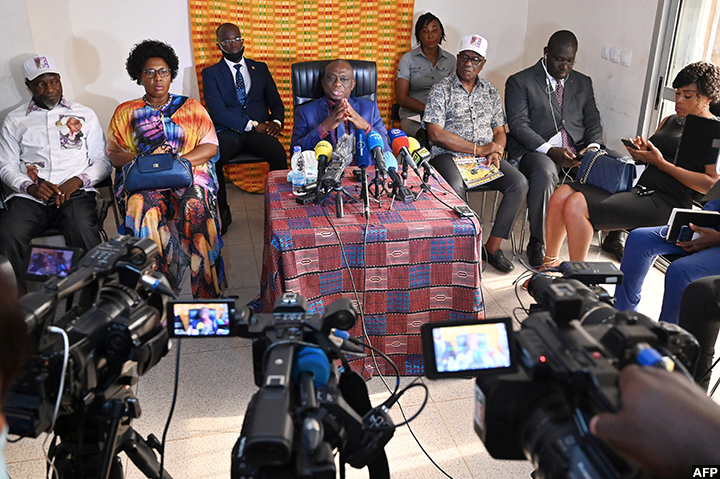 Intercommunal clashes have killed around 30 people since August, reviving memories of a 2010-2011 post-election crisis that claimed more than 3,000 lives.

Here are portraits of the approved four, as well as two rejected candidates who are likely to wield major influence from the sidelines.

A US-educated former IMF official, Ouattara has campaigned for his contested third term on his record for bringing Ivory Coast back from the ruins of a civil war and into strong economic growth.

The victor in the 2010 election and the conflict that followed, Ouattara was re-elected for another five-year term in 2015, vowing to restore stability and prosperity to the shaken country.

He had promised to hand over power but in July his plans fell apart after his hand-picked successor, prime minister Amadou Gon Coulibaly, died of a sudden heart attack.

At the age of 78, Ouattara chose to run again, arguing that a 2016 revision of the constitution reset the two-term limit to zero -- a view backed by the Constitutional Council, the nation's top court.

Violence erupted in August when he announced his bid, which the opposition dismissed as unconstitutional.

Though he touts his success in bolstering Ivory Coast's growth, critics say he has turned a blind eye to entrenched corruption, and that an economic boom has failed to trickle down to the poor.

Born in Dimbokro, he completed most of his early schooling in neighbouring Burkina Faso before studying in the US. He is married to a French businesswoman.

Former president Bedie, 86, is the flagbearer of the country's main opposition, the Ivory Coast Democratic Party (PDCI) and a longtime adversary of President Ouattara. Their rivalry dates back three decades.

Bedie became head of state in 1993 following the death of longtime ruler Felix Houphouet-Boigny and was re-elected in 1995.

He was deposed in a coup in December 1999, the country's first since independence from France in 1960, and troubled elections were held the following October.

Bedie's main influence in national politics has been to promote "Ivoirite" (Ivorian-ness) -- the notion of a national identity and national economy in a country with dozens of ethnic groups.

Bedie came in third in the 2010 presidential elections, behind Ouattara and the then incumbent, Laurent Gbagbo.

He supported Ouattara in the post-election crisis and for his first six years in power.

Bedie is nicknamed the "Sphinx of Daoukro" for his wiliness -- although adversaries say he is too old for the top job.

Head of the Ivorian Popular Front (FPI) founded by Gbagbo, he came in second in the 2015 elections with 9.2 percent of the vote.

The 67-year-old is at odds with Gbagbo diehards -- a faction in the party called GOR (the acronym in French for "Gbagbo Or Nothing").

Known by his initials as KKB, 51-year-old Bertin fell out with Bedie and the PDCI in 2015 and ran as an independent, coming third with 3.8 percent of the vote.

His strategy is to pitch to PDCI members who are opposed to Bedie's candidacy and to voters alienated by the years-long domination of the national stage by Ouattara, Bedie and Gbagbo.

The Constitutional Court has rejected 40 other candidacies, including those of Gbagbo, 75, president from 2000 to 2010, and former rebel leader turned prime minister Guillaume Soro, 47.

Gbagbo has never taken a public position on running, although his supporters filed an application in his name to the election board.

The bid was rejected on the grounds that he was handed a 20-year jail term in absentia by an Ivorian court last November over the looting of the local branch of the Central Bank of West African States during the post-election crisis.

Gbagbo was freed conditionally by the International Criminal Court (ICC) in The Hague after he was cleared in January 2019 of crimes against humanity.

He is living in Brussels pending the outcome of an appeal against the ICC ruling.

Soro provided military help that enabled Ouattara to come to power during the 2010-11 election crisis.

He became prime minister, then speaker of the National Assembly, but fell out with Ouattara in early 2019.

His election application was rejected for a 20-year sentence, also in absentia, for alleged embezzlement of public funds handed down in April.