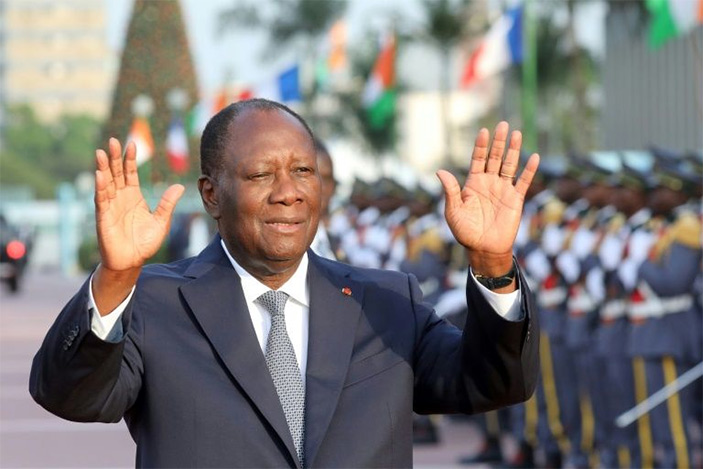 Ivory Coast's President Alassane Ouattara, who is running for a contested third term in an election on Saturday, accused the opposition of sending supporters to their deaths by carrying out a campaign of civil disobedience.

Around 30 people have been killed in pre-election clashes between rival ethnic communities since August, reviving fears Ivory Coast could slide back into the kind of violence that left 3,000 dead in a 2010-2011 crisis.

"They have to stop sending young people to their deaths. I don't see why the opposition calls for civil disobedience, which leads to criminal acts," Ouattara told AFP in an interview on Wednesday.

"We know the opposition has been creating problems. We have proof and after the elections we will start proceedings over this. We will prosecute the actors and the sponsors... whatever the rank of the person."

Both sides have in turn accused the other of inciting ethnic tensions for electoral gain as tensions mount before Saturday's ballot.

"What interest would the government have in sending people to cause trouble? It is the opposition who does this."

The campaign for the October 31 election has been marred by tensions as Ouattara, 78, faces off against two main opponents, former president Henri Konan Bedie, 86, and former Prime minister Pascal Affi N'Guessan.

The opposition camp has called for civil disobedience and an "active boycott" of the vote, though they have still not withdrawn their candidacies.

Dozens of would-be candidates have been barred from running in the election, including Laurent Gbagbo and ex-rebel chief Guillaume Soro, who both played key roles in the 2010-11 crisis.

Saying no election was without tensions, Ouattara brushed aside rumours of discord in the armed forces, where discontent caused a rebellion in military ranks in 2017.

"I solved the problem of the army despite the mutinies of 2017. Today we have a republican army. I have no doubt about the loyalty of the security forces," he said.

Around 35,000 law enforcement personnel were deployed to ensure the security of the poll on Saturday.

Elected in 2010 and re-elected in 2015, Ouattara announced in March that he would reject a third term in office, before changing his mind in August after the sudden death of his designated successor, Prime Minister Amadou Gon Coulibaly.

Ivorian law sets a two-term limit for presidents, but the country's constitutional council has ruled a reform in 2016 allows Ouattara to reset the clock and run again. The opposition rejects Ouattara's bid as unconstitutional.

The Ivorian leader has said he only ran for a third term in the nation's interest after his would-be successor's death.

"You cannot call me a dictator; I am the one who is the unhappiest. I did not wish to serve a third term," Ouattara said.

Ouattara, who in March had said he would make way for a new generation, said he hoped to surround himself with younger leaders during his next mandate and prepare them to take over from the country's old guard before the next presidential term ends.

"We will win, and I will continue to strengthen a younger team," Ouattara said. "I hope that in the years before 2025, at the latest in 2025, we will have the team ready to take over."