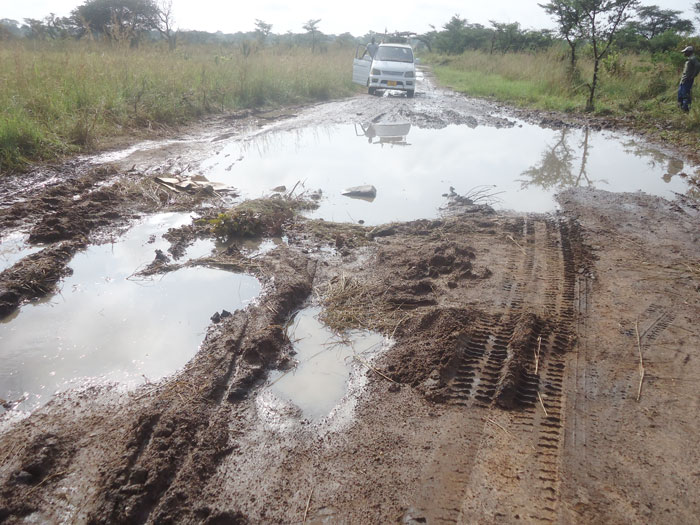 The bad state of village murram roads, potholes and flooding due to torrential rains are the major issues affecting road users in upcountry districts, a survey done by Vision Group has shown.

Several Ugandans acknowledge that the Government has over the years improved the road sector, especially through construction of highways, but others argue that a lot more needs to be done on upcountry roads that connect communities to the highways.

Many feeder roads in rural districts are riddled with potholes, which is a challenge to especially the farmers who use them to transport their produce to markets. In some areas, roads are cut off when bridges are washed away by heavy rains.

The findings about the bad road network were in an opinion poll conducted by Vision Group, which aimed at gauging the perceptions of Ugandans towards socio-economic, political and cultural issues in the country.

Vision Group conducts the public opinion poll after an interval of five years and towards national general elections, targeting potential voters aged 18 years and above. This particular poll was conducted between March 13-24 this year in 45 districts, where 5,987 respondents were interviewed. 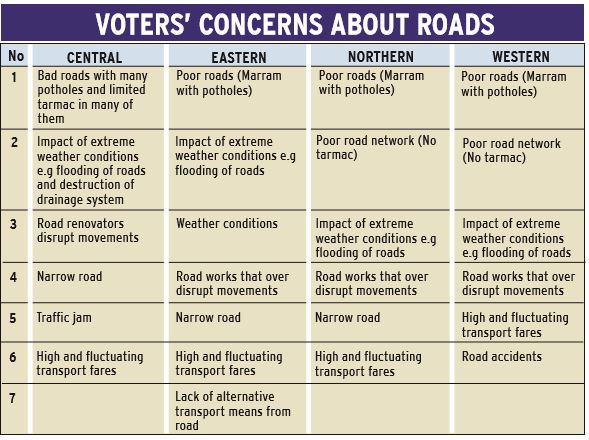 Movement in most parts of eastern Uganda remains a major challenge, especially during torrential rains that have since April 17 left a number of bridges washed away and roads damaged by flood waters.

Within Tororo district, connectivity with its neighbouring districts such as the mountainous Manafwa is still a nightmare, which forces motorists to look for alternative routes to access markets and health facilities. Connecting to other districts such as Bududa and Mbale has also become a challenge.

The worst hit areas lie along the River Malaba belt, with residents incurring heavy losses due to constant flooding that has always caused it to burst its banks and flood gardens.

Although residents concentrated on crop production during the COVID-19 lockdown, access to markets to sell their produce has become impossible due to broken bridges and poor roads. The major economic activities in the area include farming, sand mining, stone quarrying and bricklaying, which most youth engage in.

Walter Omusugu is one of the affected farmers in Tororo. Omusugu, a renowned onion farmer from Morukebu village in Kalait sub-county, said his biggest challenge is transporting the produce to the market, especially during the rainy season, when roads become impassable.

"Recently, I was forced to pay twice the cost of transporting 10 bags of onions due to the bad state of roads linking my village to Tororo town," he said.

Silver Opacha, a bodaboda cyclist in Tororo, said the cost of maintaining his bike has become unbearable due to constant breakdowns. As such, him and fellow cyclists are making losses, yet they are supposed to pay motorcycle owners sh10,000 daily.

The Tororo district engineer, Andrew Asaya, said they received sh180m from the works ministry to conduct mechanised road maintenance, especially of the badly damaged ones. Asaya said they have so far worked on more than 20km of the road network, but have been bogged down by the broken down equipment.

"One grader is in Bugembe for the repairs and the second one lacks tyres. I went to the works ministry over the issue, but I was told that they are waiting for money for the fourth quarter. This has left us without any alternative,'' he said.

The Tororo chief administrative officer, Dunstan Balaba, said prior to the onset of the rains, the district used to have one of the best road networks in the country because it has an active roads committee that sits quarterly to review the roads workplan.

The committee comprises district technocrats, Uganda National Roads Authority (UNRA) engineers and political heads, including six legislators from Tororo. "But since we border the mountainous Manafwa, floods have forced their way down to Tororo, which has devastated our roads,'' Balaba said.

Pajapyani Ogola, the acting Busia district engineer, said they cannot deliver beyond the funding they get from the Government, adding that they work within the provided budget.

"I understand the residents' complaints but as a district, we are constrained financially. We have over 800km of roads, but the resource envelope allows us only do one major road rehabilitation every financial year," he noted.

Geoffrey Wandera, the Busia district chairperson, commended the Government for providing the road unit but said for improved road works, the budgetary allocation from the centre needs to be increased.

The situation in the eastern region is similar to what is happening in other parts of the country such as northern and western Uganda, where most feeder roads become impassable whenever it rains.

Robert Otim Ojwina from Lira said roads are not being managed well, citing the Otuke-Agago road, which is now impassable. "People now have to travel on foot."

To Ojwima, there should be a representative of the central government at the district, so that the cries of the people can reach the centre quickly and action taken fast. Thomas Okello, who always travels from Lira via Corner Kamdini to Apac, said: "Many of our roads are in a poor state, which disrupts transport."

Okello suggested that the Government comes up with a plan to monitor how money released periodically for road maintenance can be effectively utilised by local governments. "A lot of shoddy work is done and this calls for proper audit."

Ejebio Oyie, a resident, said he cannot understand why roads in Lira are not tarmacked like in other neighbouring districts outside the Lango sub-region. "Dott Services was brought to work on the Lira-Kamdini road almost at the same time they worked on the Soroti-Tororo road. Why was this one of Lira-Kamdini poorly done? Why is Lira having the poorest roads with few kilometres of tarmac in the country? All roads have no tarmac, yet those in all neighbouring districts have tarmac, why?" he said.

Kamil Ocan, a motorist who routinely uses roads in the Lango sub-region, said the bad roads are damaging their vehicles. Alternatively, Ocan suggested that the works ministry should be put in charge of roads again, but with proper facilitation and equipment to ensure constant road maintenance.

"The Government should re-introduce the public works departments with stations on all major roads so that those employed under it just pick their equipment and work on bad spots within their areas. The roads under districts are not good because of lack of equipment. More equipment should be given to the districts. At the moment, the districts are working with only one grader and this also breaks down," Ocan argued.

The UNRA media relations manager, Allan Sempebwa, said roads are a key factor for economic development as they support all other drivers such as health, education and security.

He said there were over 23 road construction projects being undertaken countrywide, in addition to maintenance of gravel roads to ensure that they are in a good and motorable state.

Sempebwa, however, admitted that there were some roads that were pending construction, adding: "The Government cannot work on all roads at ago." He noted that finances, procurement delays and weather vagaries were some of the challenges causing delays on road construction projects.

"For instance, we are working on the bridge along the MuyembeNakapiripirit road in eastern Uganda, which collapsed after heavy rains. We have created a diversion for traffic as we work on the bridge, and we shall restore it to its former motorable state," he explained.

Besides, Sempebwa revealed that in the last two years, they came up with a framework where firms are contracted to maintain a given murram road for three years to avoid delays by procurement processes.

The works state minister, Joy Kabatsi, acknowledged that several roads have been left in a bad state because of torrential rains that swept away bridges in some areas. She said the delay to work on some roads was because they were attending to emergencies brought about by the heavy rains, which forced the Government to divert money meant for some road projects.