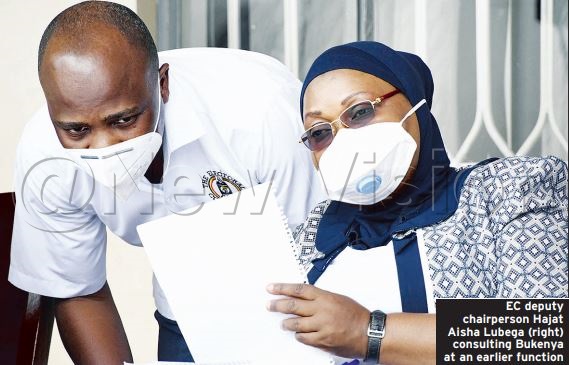 Over 145 petitions have been filed with the Electoral Commission (EC), challenging the nomination of candidates for the forthcoming parliamentary and local council elections.

Without disclosing the names of the petitioners, EC acting spokesperson Paul Bukenya told New Vision yesterday that petitioners are from all political parties while others are independents.

"The complaints which have come before EC are 145 besides the ones which are not registered formally.  They include those for special interest groups (SIGs), parliamentary and local government nominations," he said.

However, sources told New Vision that the petitions are predominantly filed by aggrieved members of the NRM who have opted to challenge the nomination of party flag-bearers.

The EC tribunal, headed by Justice Simon Byabakama, on Monday October 26 held a meeting to handle the petitions.

Bukenya said some petitioners claim the candidates they nominated still had unresolved cases arising from their party primaries.

Other reasons cited by petitioners include allegations that the nominated candidate lacks the required academic qualifications, have name discrepancies on their documents or that they lied about their age so as to take part in elections for SIGs.

Bukenya said others accuse their returning officers of blocking their nominations, yet they believe they had fulfilled all the requirements and even paid nomination fees.

"They are challenging the refusal by our returning officers to nominate them praying that they are given the opportunity to get nominated.  The returning officers, of course, follow the guidelines issued, so when someone has such a complaint they can run to EC," he said.

He said they were using provisions of the Electoral Commission (EC) Act to handle the petitions. "Section 15 of the EC Act gives it the power to receive, hear and resolve complaints which may be raised relating to the process, including nominations.

So there are election- elated and nomination-related complaints which we have been handling since mid-August," Bukenya said. According to sources, most petitioners are from the ruling National Resistance Movement (NRM) party, where they cited unresolved disputes arising from the primaries.

Others are from National Unity Platform (NUP), Forum for Democratic Change (FDC) and Democratic Party (DP). "Other petitioners claim some of the people we nominated had already been nominated for instance for local government elections and were again nominated for the parliamentary, polls," Bukenya explained.

NRM set up an election disputes tribunal that heard 645 petitions, including 455 for Members of Parliament and 190 for candidates at local government level.

The party's electoral commission deputy chairperson, John Arimpa Kigyagi, said the decisions of the party can only be challenged in courts of law. "The national EC cannot decide on what we did according to our way of deciding who the flag-bearers are.

Our law provides that the decision of our district tribunal of NRM is final, so really they cannot now challenge us.

Where they can is regarding academic documents and if those issues are there and they have evidence, our legal teams will go there and defend our flag-bearers," he said.

"We concluded all the electoral cases. In the country we have had few cases which were not properly concluded and these were in Mawogola and Bukanga, where we allowed candidates to stand as independents because there were unconcluded issues," he added.

Kigyagi, the former Mbarara Municipality MP, said they have cases where some of their district chairpersons such as Moses Karangwa of Kayunga endorsed people who did not go through the primary elections.

"They did it either in ignorance or just out of their feelings. For those ones, the secretary-general will go and denominate them and then our flag-bearers will be nominated. Karangwa endorsed seven who did not go through local council elections.

The one who endorsed himself comes from a sub-county in Namutumba," he revealed. In the primaries, Karangwa backed his daughter, Jackline Birungi, to challenge NRM's Agatha Nalubwama for the Kayunga District Woman MP seat at the Electoral Commission.

Nalubwama was in September declared winner, but Birungi claimed that her victory had been stolen and petitioned the NRM election tribunal.

But the tribunal refused to hear her petition and she consequently dragged Nalubwama and NRM to Mukono High Court.

Court quashed Nalubwama's victory and ordered the re-tallying of the votes, but NRM and Nalubwama opposed the order and challenged it in the Court of Appeal that stayed the execution of the High Court ruling, hence allowing Nalubwama to be nominated as the official NRM flagbearer.

In another case, the NRM candidate for Napore West MP seat in Karenga district, Phillips Lokwang, also challenged the nomination of Fidelis Loluk Logwe, as an independent, over his alleged criminal record.

The Anti-Corruption Court in 2014 indicted Loluk for corruption and abuse of office while he was Kaabong town council clerk.

He was found guilty and sentenced to two years' imprisonment. During NRM primaries, violence — sometimes life-threatening — broke out between rival groups in about 10 districts, including Ssembabule, Katakwi, Namutumba, Ntungamo and Jinja.

President Yoweri Museveni, who is also NRM chairman, has since vowed that politicians who rigged exercise will be dealt with according to the law.

Museveni has dispatched a 47-member team, including NRM's Central Executive Committee members, to hold reconciliation meetings across the country in order to repair the rifts created as a result of their elections.

However, many party members nominated as independents have not agreed to withdraw from the race.