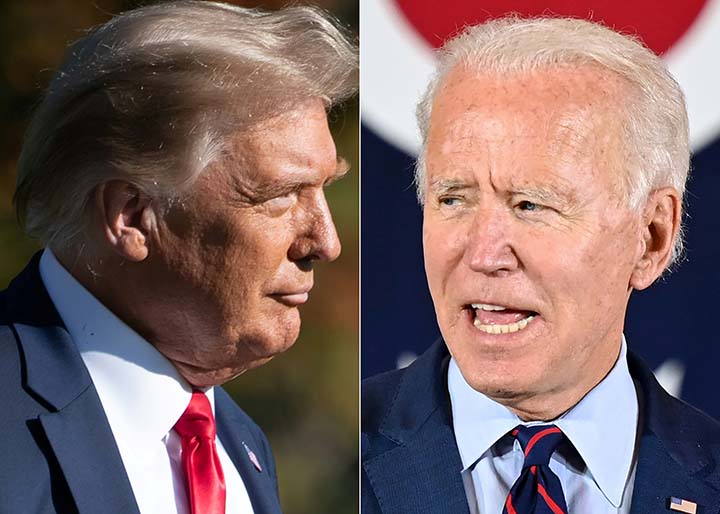 US presidential challenger Joe Biden on Sunday accused Donald Trump of giving up in the fight against Covid-19 as the president faced a new outbreak in his team, surging infections nationwide and an uncomfortable admission by his chief of staff.

Nine days before the vote -- and with reported US coronavirus deaths having surpassed the grim total of 225,000 -- Trump's chief of staff Mark Meadows conceded Sunday that "we are not going to control the pandemic," which he said could only be done through "vaccines, therapeutics and other mitigation areas."

Control was not practical, he said, because "it is a contagious virus just like the flu."

Biden immediately seized on Meadows' comment as he again hammered the administration over the virus, which has set records for new cases in recent days, with nearly 90,000 on Saturday and more than 63,000 Sunday.

"It was a candid acknowledgement of what President Trump's strategy has clearly been from the beginning of this crisis: to wave the white flag of defeat and hope that by ignoring it, the virus would simply go away," the former vice president said in a statement. "It hasn't, and it won't."

He spoke as millions of Americans -- wary of crowded polling booths on Election Day as coronavirus cases surge, and energized by a race that both candidates have framed as existential -- continued to vote early, whether by mail or in person.

The tally by the independent US Election Project, run by the University of Florida, said that as of Sunday more than 59 million people had voted so far. Some 137 million votes were cast in total in 2016.

Down in the polls and with time running out, Trump on Sunday was continuing a furious pace of campaigning, with stops in New Hampshire and Maine.

His repeated efforts to downplay the severity of the pandemic or shift voters' attention elsewhere has been met with the constant drip of bad news about the virus.

The latest example was Vice President Mike Pence's chief of staff Marc Short, and reportedly several of his aides, testing positive for Covid, swelling the list of administration staff to have caught the virus.

Campaign spokesman Tim Murtaugh said Sunday that Pence would continue, with doctors' approval, to criss-cross the country in the waning days of the campaign. Both Pence and his wife had tested negative, he said.

"The folks on his staff are in quarantine, and he relies on the very sound medical advice of the White House medical unit," Murtaugh told Fox News.

The decision by Pence, who heads the White House coronavirus task force, to ignore standing advice from health experts to quarantine himself drew fire from Biden running mate Kamala Harris, who also criticized Meadows for likening the coronavirus to the flu.

"This is the greatest failure of any presidential administration in the history of America," she said.

No vaccines have yet been approved for the virus, and health experts are warning of thousands more deaths in the months ahead.

Trump and his aides have repeatedly attacked Biden's energy levels and what they say is his thin record of accomplishments.

Biden ahead in polls

Murtaugh slammed Biden for his light campaign schedule, saying the 77-year-old Democratic challenger was "feeling the heat" and "took five out of six days off" before the last presidential debate on Thursday.

The remarks drew a contrast to the frenetic pace that Trump, 74, has maintained, while Biden has set a more cautious course, speaking less frequently and to smaller, socially distanced groups.

"The difference between what we're doing and what Donald Trump is doing," said Biden's deputy campaign manager Kate Bedingfield, is that "we're doing it safely."

Biden has maintained a stable lead of around 10 points in national polls, and narrower leads in battleground states.

But both Republicans and Democrats are wary of polling after the stunning upset Trump pulled off in 2016 when he defeated Hillary Clinton.