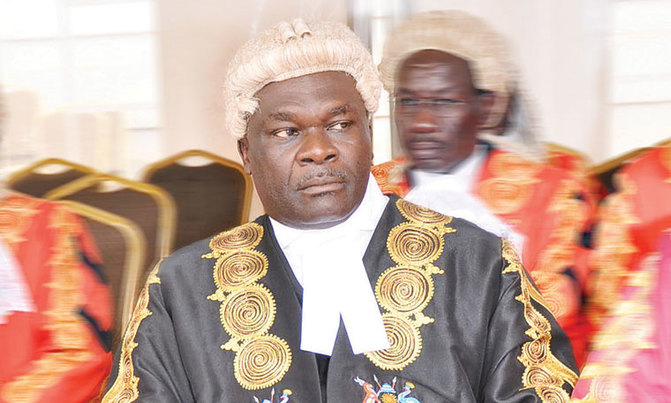 Chief Justice Alfonse Owiny-Dollo was sworn in as the 13th Chief Justice of Uganda on September 8, replacing Justice Bart Katureebe, who retired from the Judiciary in June. It is now over a month since Owiny-Dollo assumed office. We talked with him about a wide range of issues relating to the administration of justice in Uganda. Below are excerpts from the interview that aired on Urban TV last week.

How has it been like one month into office as the chief justice?

To me, it was a continuation first from the June 20, when the Chief Justice retired. I became acting Chief Justice by constitutional provision and took charge, but three years prior, I was the second in command — deputy Chief Justice — and it is part of the top administration of the Judiciary.

What is your priority as chief justice?

There is no human society in the world which does not have a justice system in some form or the other, meaning the Judiciary is an important part of a civilised society...the thrust of my administration is empowering, facilitating and seeing that the Judiciary serves the people of Uganda.

The Judiciary, as it is now, is incapacitated. It does not have the full means to serve the people, to ensure that justice is felt, from the top, down to the ordinary person in the villages. The thrust of my tenure in office will be consolidating, strengthening and ensuring that our people realise access to justice.

What legacy would you want to leave when your tenure comes to an end?

There seems to be a disconnect between the Judiciary and the public on the handling of cases. At times there is negative public opinion about the judges' decisions. What is your view?

The notion that a judicial officer should deliver judgment to please people is wrong. My duty as a judge is to state that this is the position of the law, and then I apply the law to the evidence that has been adduced...You may want me to pronounce that the sun rises from the north and sets in the south, but if the law says it rises from the east and sets in the west, that is what I will pronounce.

The moment judges begin passing judgement to please people, that is very dangerous, because that is not our professional duty. Our professional duty is to say this is what the law says, if the law which was pronounced is not popular, people should not rush to blame the Judiciary, go back to your representative in Parliament, to your government to amend that law.

Recently, the Judiciary introduced plea bargaining as a way of reducing case backlog, but the backlog monster is still around. What is the Judiciary doing to deal with this for good?

My fear is that in two years' time, there will be over a 40,000 case backlog. This is something we need to confront and the narrative out there is what is the Judiciary doing? Why is there a backlog? The Judiciary is not doing enough...I have said before and I will reiterate this point; some of the hardworking persons in this country are judicial officers.

Make a survey, come to the Supreme Court or the High Court after 5:00pm, go around the country where there are judicial officers, you will be surprised to find that when people are taking their beer, enjoying golf, a judicial officer is completing some work.

This is what we should be asking; when will the Judiciary be given the requisite number of judicial officers to ensure there is no backlog? We are now about 45 million Ugandans. How can 60 High Court judges serve this population? How can 300 magistrates serve 45 million people? That is the question that should be asked to Parliament and the Executive not the Judiciary. You have a chief magistrate who takes care of three other magisterial areas. You have a magistrate of grade one, who takes care of four other grade one areas. How effective can that officer be?

If from 60 High Court judges we had a minimum of 120, preferably 150, you would feel the impact...You cannot scoop all the water out of Lake Victoria using a basin... I will retire from the Judiciary when there is backlog, and the next Chief Justice will come and retire, until we sort out the issue of what needs to be done.

We have seen violence in party primaries that occasioned eight deaths. How can we ensure a violence-free election?

Elections are not about life and death, it is not at all costs that I must win. This I am saying not as Chief Justice or judicial officer, but as a Ugandan. Let people pronounce themselves on who they want to represent them. If they make a mistake, they will learn from the mistake. You do not have to do all sorts of bad things because you must be elected, it is unnecessary.

Now speaking as the Chief Justice, on behalf of the Judiciary, the laws are very clear and I send out a warning to people who are going to engage in these political activities and their supporters. If violence is proved, if an electoral offence such as bribing is proved, we will annul that election.

If a candidate is proven to have committed an electoral offence... they should not participate in a byelection which is ordered because they are the reason the election was annulled and their hands are still stained. They should be sanctioned beyond the next election cycle and for five or 10 years, they should not participate in an election. This will sober up a lot of people who think going to Parliament is by hook and crook. I do not know whether the law permits us to do that.

People say that justice is for sale, especially within the lower courts. What is your plan to fight corruption in the courts of law?

This is a narrative we need to change. We need to approach this with a different paradigm, there must be a shift in our thinking. What is corruption? Corruption goes beyond exchange of money for other consideration; corruption is a lot more in fraud. Let us not stop at blaming those few officers who are corrupt, they are a very small number, but of course you need one corrupt officer to spoil the name of the whole institution.

An administrator of justice cannot condone corruption because one thing that should never be bought is justice. It is like going to heaven, you cannot buy it, you cannot keep giving out money but doing the bad things and go to heaven. You buy going to heaven by doing the right things.

Is it poor pay to your judicial officers that is fuelling corruption in courts of law?

Some of your members on the bench have been indicted by a foreign country. What does this mean for the Judiciary?

We are investigating those allegations, we treat them as allegations that have been made against these judicial officers, one of whom has since left and the other is still an active judicial officer. We have an institution that is investigating to find some truth... According to the statement they issued, nobody gave them a hearing. The right to be heard is fundamental, it is cardinal, it can never be compromised the world over.

You were a member of the constituent assembly. What is that one thing you think you should have done?

Provisions like the term limits should have been entrenched. If you want to use the word regret, I regret because I was a member of the Constituent Assembly. The popular will of the people, according to Justice Odoki's commission which did the consultative work and came up with a draft constitution, was that there should be term limits.

Term limits are good and should have been entrenched. What do I mean? It should have been more difficult for Parliament to amend... meaning if Parliament wanted it amended, they would start the process, send it to the people to determine in a referendum on whether the Constitution should be amended or not. For some reason, we did not think it should be entrenched, I think that is one of the mistakes we made.

Do you think Parliament should restore presidential term limits?

Parliament made an attempt to legislate it, in the amendment that lifted the presidential age limit. This would have made it an omnibus form of amendment. They did it, but it failed on legal and technical grounds.

The Presidential age limit was also removed. Do you think Parliament did the right thing?

My personal view is the 1995 Constitution is so young, it should have been left to be nurtured without a single amendment. As a child grows from birth, they learn to crawl, sit, run around the house, speak and all that...