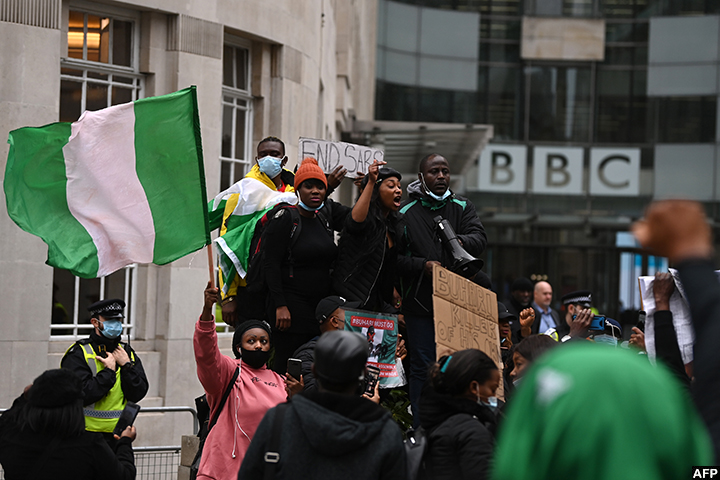 Around 500 demonstrators took to the streets of London on Saturday in support of youth protests in Nigeria that have spiralled into widespread unrest.

Nigeria President Muhammadu Buhari was the focus of the anger for his handling of anti-police brutality protests against the loathed Special Anti-Robbery Squad or Sars.

Black-clad demonstrators, mostly part of Britain's large Nigerian diaspora, held signs reading "End Sars, end police brutality" and sang "Buhari is a dead man" as they made their way through the streets of the capital.

Others waved Nigerian flags, with some splashed with red paint to make them look bloodstained, while some wore green and white masks and shouted through loudspeakers as they protested at London landmarks, including Parliament Square and the BBC.

Buhari scrapped the feared police unit and pledged reforms, but the demands from the young protesters broadened to calls for more sweeping change.

Shops lifted their shutters and market traders set out their stalls Saturday, as the city cautiously reopened after a curfew was eased following days of unrest.

Police stations were burnt, supermarkets looted and vehicles destroyed as violence flared across the economic hub of 20 million, with officials accusing "hoodlums" of taking advantage of the mayhem.