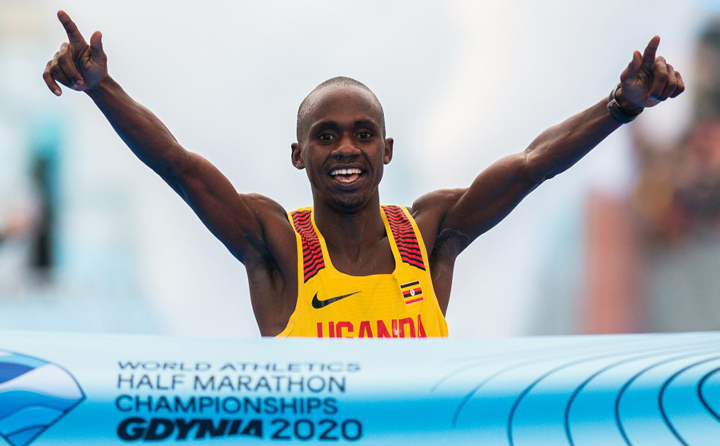 Jacob Kiplimo who on Saturday won the World Half Marathon in Poland has credited the support from his fellow athletes for pushing him to victory.

The 19-year-old won Uganda's first-ever gold medal in his debut at the event in Poland, clocking a championship record of 58:49.

"I didn't train for so long for this championship. I think I used one month. The support from fellow athletes pushed me to reach this milestone. It was not easy to win since there are a lot of challenges but I managed to live up to my expectations after working hard," noted Kiplimo.

Kiplimo made the remarks on Thursday at an event organised by the National Council of Sports (NCS) at Copper Chimney Restaurant in Lugogo to welcome Team Uganda back home.

Coaches Benjamin Njia and Addy Ruiter were in charge of the team in Poland.

Cheptegei who finished 4th on Saturday pointed out that the postponement of the 2020 Tokyo Olympics has given him time to prepare and win his first Olympic medal.

"The one year added is the best opportunity to prepare mentally to become an Olympic champion. I hope next year is as good as this year. We have shown the world that when Uganda joins the competition, we are not just participators but we come to win gold medals. We have surprised the world with what we can do," he stated.

NCS chairman Donald Rukare, general secretary Bernard Ogwel, his assistant David Katende, UAF's Dominic Otuchet and Beatrice Ayikoru, AIGP Andrew Sorowen and presidential adviser on sports Karl Gunter Lange were some are some of the officials that graced the event.