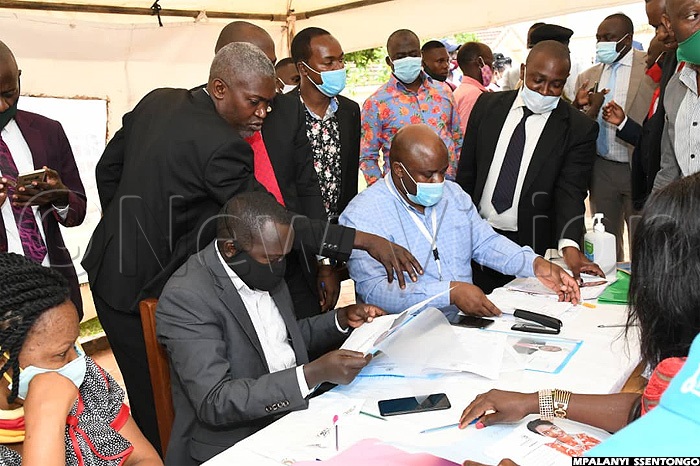 The Electoral Commission started nominating parliamentary aspirants on Thursday, with the exercise also scheduled to continue on Friday.

The requirements for one to be nominated include the aspirant being a registered voter of the specific electoral area they want to represent in Parliament. One should also be in possession of a receipt of sh3m nomination fees from the Uganda Revenue Authority (URA), certificates and original copies of the Uganda Advanced Certificate of Education (UACE) or its equivalent (only for viewing). Other requirements are registered voters to support the aspirants; and in case of change of name, the aspirant must have sworn in an affidavit by a magistrate or commissioner of oath.

Dr. Stella Nyanzi. She is eyeing the Kampala Woman MP seat. And she was given the nod to take part in next year's race with successful nomination in Ntinda earlier today.

It is indeed a busy day for the Electoral Commission. They will not get the job done today, so they have scheduled tomorrow (Friday) as the other day for the parliamentary nominations.

Some aspirants will not have to wait for Friday. One of them is Dennis Mbidde Ssebugwawo, who has been nominated to run for the Rubaga South seat.

After missing out on the NUP ticket, former Democratic Party (DP) spokesperson Kenneth Paul Kakande is going independent - and has been nominated for the Nakawa West MP seat.

A number of hopefuls have thrown their hats in the various political rings, including Muhammad Ssegirinya, who is eyeing the Kawempe North seat.

In an era when the coronavirus continues to shake the entire world with ghoulish fascination, it is only the wiser to observe the standard operating procedures instituted by the authorities. And at Kalaki district nomination centre, the SOPs are being followed.

For instance, the election official below was keen to wash her hands first . . .

. . .  then she had her temperature checked with a temperature gun on a fairly warm Thursday.

Josephine Ibaseret was nominated as an independent candidate for Pallisa Woman MP.

Serere district incumbent MPs opened day one of the parliamentary nominations at the office of the returning officer at the district.

Kasilo County MP Elijah Okupa was the first to be nominated at 9am followed an hour later by the State minister for fisheries, Hellen Adoa, as district woman MP.

Third to walk in at 11am was Serere County MP Bishop Patrick Okabe, who doubles as the chairperson of the Teso Parliamentary Group.

Okupa is seeking a fifth term and he is contesting as an Independent after falling out of the opposition Forum for Democratic Change (FDC) party.

This time around, it will be a repeat of the last election as Alaso, who is contesting under the Alliance for National Transformation (ANT), will be seeking to retake the seat.

Remember when I mentioned how Kampala Woman MP-seeking Faridah Nambi emerged at the Electoral Commission offices in Ntinda?

Well, she has been nominated.

It is definitely busy times for the Electoral Commission officials at the frontline of today's nomination exercise. And they will expect some heat coming their way from some of the aspirants . . .

Kawempe North MP Latif Ssebagala is seeking re-election and below is how he showed up for nomination. Initially, he had changed his political ambitions, throwing his hat into the Kampala Lord Mayor race on the National Unity Platform (NUP) ticket.

But after winning the party's flag, he had a change of heart and withdrew his candidature. Days later, he announced he would instead run again for MP in a bid to retain his seat.

Daniel Muheirwe, the incumbent MP for Buhaguzi County, has been nominated as an independent candidate at Kikuube district Electoral Commission offices.

This is how Faridah Nambi, who is eyeing the Kampala Woman MP seat, showed up for her nomination.

Standing in the bucket of a tractor and armed with a shovel in one hand and flashing the thumbs-up sign with the other, it was a grand arrival for the parliamentary aspirant. New Vision's Nicholas Oneal was keen to freeze the moment for us.

Gen. Moses Ali, who is the First Deputy Prime Minister, addressed reporters after being nominated earlier this morning. He is eyeing re-election for the Adjumani West County parliamentary seat.

Nomination of parliamentary hopefuls is going on at the Electoral Commission offices in Ntinda, with Muhammad Nsereko for Kampala Central, Kato Lubwama for Rubaga South, Beti Olive Kamya for Rubaga North, Sulaiman Kidandala for Kawempe North and Salim Serunkuuma having been fully nominated.

The nomination of parliamentary candidates in Mukono district have kicked off at the Mukono district Electoral Commission offices. The exercise, led by Mukono district returning officer Mark Muganzi Mayanja, started with the Mukono North incumbent, Ronald Kibuule, who is seeking re-election. He was followed by Zuliya Basiima, who is vying for the Nakifuma County seat, with that area's incumbent, Eng. Robert Kafeero Ssekitooleko, following.

Kibuule said that due to the standard operating procedures that barred the contestants from turning up with processions, the exercise is quick and time-saving. Kafeero, eyeing re-election, said he has been a vocal and vibrant legislator.