Uganda’s capital became a city shortly after 11 a.m. on October 8, 1962 when the Duke of Kent handed the Royal Charter to the Mayor, Alderman Mrs. Barbara Saben, during a 40-minute ceremony in the Town Hall.

The Duke and Duchess of Kent at the Town Hall on October 8, 1962

Uganda’s capital became a city shortly after 11 a.m. on October 8, 1962 when the Duke of Kent handed the Royal Charter to the Mayor, Alderman Mrs. Barbara Saben, during a 40-minute ceremony in the Town Hall.

Uganda's capital became a city shortly after 11 a.m. yesterday when the Duke of Kent handed the Royal Charter to the Mayor, Alderman Mrs. Barbara Saben, during a 40-minute ceremony in the Town Hall. The Duke then became the first Freeman of the new city when he received a silver casket containing the Scroll of Freedom from the Mayor.

The Governor, Sir Walter Coutts, and Lady Coutts and three former Governors with their wives, Sir Frederick and Lady Crawford, Sir Andrew and Lady Cohen and Sir John and Lady Hathorn-Hall, were among the large audience of invited guests who saw the ceremony.  The Governor of Kenya, Sir Patrick Renison, and Lady Renison, the Resident of Zanzibar, Sir George Mooring, and the Aga Khan were also there.

Thousands of Kampala citizens cheered and waved Uhuru flags as the Duke and Duchess of Kent arrived to attend the Civic ceremony at Kampala Town Hall yesterday morning. 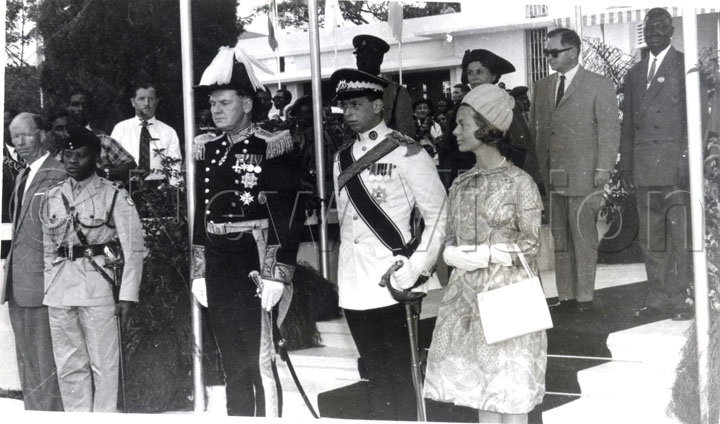 The Duke and Duchess of Kent at Town Hall during a reception when City status was conferred upon Kampala on October 8, 1962

The Duke, wearing the tropical uniform of the Royal Scots Greys and the Duchess, wearing a gaily floralled chiffon dress with a match green chiffon high pill hat, were met at the foot of the Town Hall steps by the Governor, Sir Walter Coutts and Lady Coutts.

The Duke took the salute as the Tanganyika police band struck up the British National Anthem. The Royal visitors were then escorted to the first flight of the Town Hall steps and introduced to the Mayor of Kampala, Alderman Mrs. Barbara Saben and Minister of Regional Administration, Mr. C. J. Obwangor.

The Mayor then escorted the Duke and Duchess to the second flat of steps where a 10 year old African girl presented a bouquet of carnations and other flowers to the Duchess. At the third flat of steps the Mayor introduced the Royal visitors to the Mayors of Nairobi and Dar es Salaam and former and present civic heads of Kampala.

After signing the visitors' book the Duke and the Mayor entered the Council chamber, followed by the Duchess and Mr. Saben; the Governor and Lady Coutts, the Duchess' Lady in Waiting and the Duke's Private Secretary, the Governor's A.D.C, and Uganda Equerry, Mr. Obwangor and Mrs. Obwangor, the Deputy Mayor and the Town Clerk. 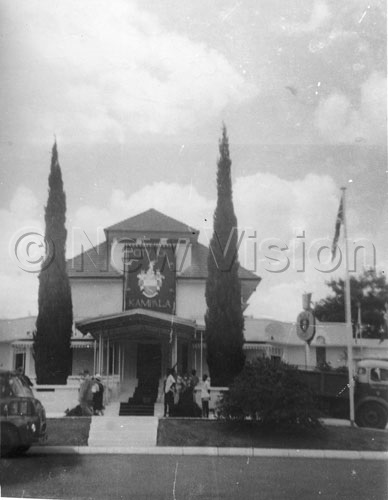 The newly unveiled Court of Arms for Kampala city displayed above the entrance to the hall on October 8, 1962

When the Royal party were seated, the Town Clerk, Mr. Evans, read the address of welcome which he then presented to the Duke. In the address, the Mayor, Alderman and the councillors said they were greatly honoured by the visit of their Royal Highnesses and pledged continued loyalty to the Queen.

In his reply, the Duke said he was pleased to represent the Queen at the "momentous events which are to take place this week." The civic ceremony was a reminder that true nationalism springs from civic consciousness and from a desire to serve one's fellow citizens and countrymen without thought of reward except that of knowing one was contributing to the common good, he said.

This service given by members of local authorities throughout the Commonwealth deserved to be remembered on national as well as local occasions.  The Duke was glad to see these conditions of service so much in evidence in Uganda.

He went on: "This service has helped to build this fi ne town whose people are today and tomorrow receiving some recompense for all the hard work of the past. The municipal council of Kampala is well-known for the harmonious co-operation of all the races which served on the council. Long may this co-operation last; this co-operation which has achieved so much in the past because it has been possible to use to the full the experience and ability of each and every member.

"I hope that Kampala may flourish in peace and prosperity to enjoy this new status which is conferred on it today. May this new dignity be not only a source of inspiration and pride to the Mayor Aldermen and councilors and citizens, but also to local government general throughout Uganda," added the Duke.

He handed to the Mayor the Royal Charter conferring city status of Kampala. The Duke then read a message from the Queen sending her best wishes to the City Council and citizens of Kampala on this "memorable occasion". 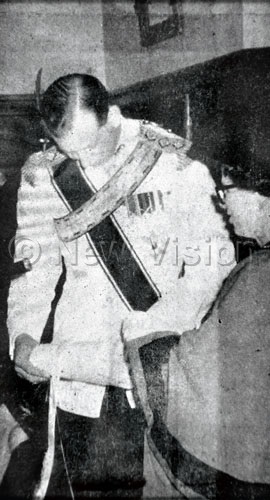 The Mayor of Kampala, Ald. Mrs. Barbara Saben (black hat), hands the Duke of Kent the scroll conferring on him the freedom of the new City of Kampala on October 8, 1962

"It is my sincere hope that the new City of Kampala together with all it its people will enjoy continued happiness and prosperity through the years to come," the message said.
Replying to the Duke, the Mayor said she received the Royal Charter with great pride. She pointed out that although by some standards the town would be considered very young, it had a unity of purpose and civic pride which might have been born out of the difficulties of the early years.

She explained that Kampala had not been gazetted as a township until then and went on to outline the early difficulties. The new constitution on local authorities *** and extended duties was welcomed with confidence. Also with the new constitution, Kampala was recognised as the capital of Uganda.

Kampala's new status would serve as an incentive to greater service. The Mayor paid tribute to past and present members and officials of the Council. Then in recognition of his distinguished service and importance of his mission to Uganda, the Mayor asked the Duke to accept the Freedom of the City. 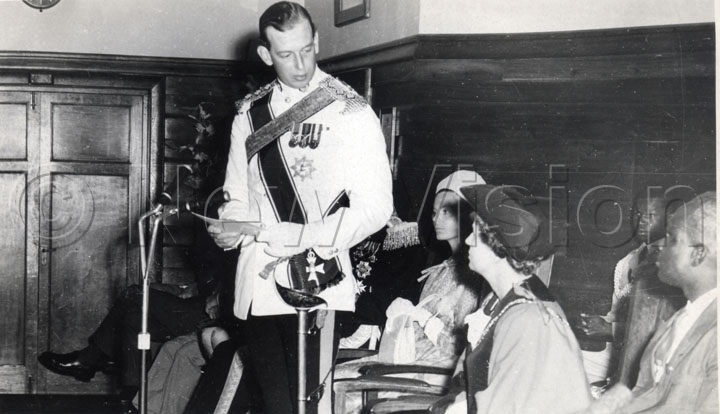 The Duke and Duchess of Kent at Town Hall after the freedom of the new City of Kampala was conferred upon him by the Mayor of Kampala, Ald. Mrs. Barbara Saben (black hat) on October 8, 1962.

After accepting the Scroll of Freedom and signing the Roll of Freedom, the Duke said he was ‘deeply grateful' for the honour the Council had bestowed on him. The Royal Party then left the Council Chamber, moved into the Mayor's Parlour, and later into the Town Hall Garden where local dignitaries were presented to Royal couple.
After the Duke and Duchess had left, the Mayor of Nairobi, Ald. C. Rubia, presented a silver coffee set to the Mayor. Also present at the ceremony were the Mayor of Dar es Salaam, Jinja, Mbale, the Deputy Mayor of Mombasa and the Chairman of Masaka Council.

As published in the Uganda Argus of October 9, 1962: Vision Group Resource Centre

Natural hair: After the big chop

Natural hair: After the big chop