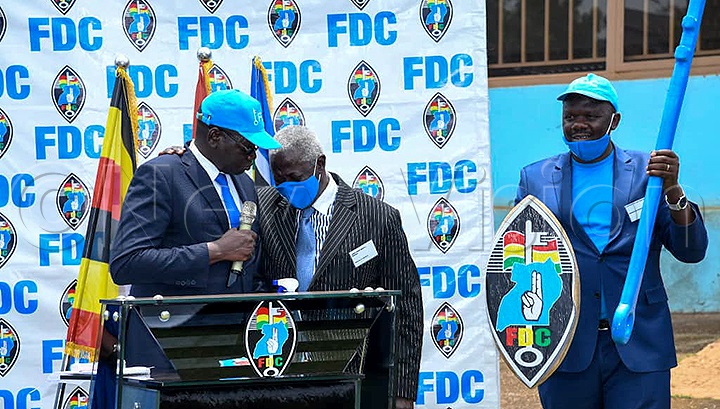 KAMPALA - The Forum for Democratic Change (FDC) national party chairman, Ambassador Wasswa Biriggwa, who has been contesting for the party presidential flag has pulled out of the race and endorsed Patrick Amuriat Oboi, the party president.

Biriggwa said he was doing it because of unity.

He said the last time presidential flag bearer elections were held, the party split and other members chose to form another party. In order to avoid this mess, he decided to leave the race for Amuriat to promote unity in the party.

After Biriggwa's pronouncement that he had stepped aside for Amuriat, delegates were left in shock and disbelief.

On his side, Amuriat almost failed to deliver his speech due to excitement.

FDC delegates have Thursday convened at the party headquarters at Najjanankumbi, to take part in the selection of the presidential flag bearer. In the race are Patrick Amuriat Oboi, and Amb. Wasswa Biriggwa.

In his speech, the acting FDC Chairman, Kibuuka Mukalazi, said they will also use the delegates conference to implement the extension of the tenure of the party top office bearers for a period of three more years.

He said this was requested by the party's National Executive Council, given that the party experienced some set back due to the COVID-19 pandemic.

Meanwhile, the party acting president, Joyce Nabbosa Ssebuggwawo who doubles as Mayor for Lubaga Municipality, announced that the party will pay nomination fees for flag bearer, candidates standing for Councillorship, District Chairperson LC V, and the Members of Parliament.

She added that for those who had already paid using their own money, shall be subjected to a refund.

The FDC Secretary-General, Nathan Mandala Mafabi, castigated the sitting government for frustrating the smooth running of their party activities.

He said on many occasions the police have failed their regional delegates conference in the guise of implementing Covid-19 guidelines.

"Another thing, it's constitutional that political parties are funded by the government but as a party, we have not received our take and I think, this is a deliberate move to fail us," said Mafabi.

He further revealed that some of their flag bearer members of Parliament have deliberately refused to remit their monthly contribution towards the party as per the contract.

"Our NEC had resolved that we drag these MPs to court but we chose to use internal means to handle the matter but nothing has changed and this has greatly affected the day-to-day running of our party activities, "Mafabi revealed.