Home
NEWS
MEDIA
Supplements
Tenders
Notices
“The staff tribunal’s decisions bear financial implications of sh1b to the university, which must pay wages to the reinstated staff.

“The staff tribunal’s decisions bear financial implications of sh1b to the university, which must pay wages to the reinstated staff.

Makerere University has appealed to the finance ministry to help it raise over sh1b to cover costs that arose after the University Staff Tribunal ordered the reinstatement of suspended and sacked staff back on the payroll.

In a letter to the finance ministry permanent secretary, Keith Muhakanizi, the university secretary, Yusuf Kiranda, noted that while executing its mandate, the staff tribunal directed the university to reinstate several members of staff who had either been dismissed or suspended by the appointments board after determination of cases of misconduct against them.

Efforts to get a comment from Muhakanizi proved futile.
"The staff tribunal's decisions bear financial implications of sh1b to the university, which must pay wages to the reinstated staff.

Part of the wage cost applies to Financial Year 2020/2021, while others are for previous financial years, hence constituting domestic arrears," Kiranda explained.
He noted that the matter had been tabled before the University Council during its 149th meeting held on October 27.

"The council noted that the staff reinstatement orders occurred after the budget process for financial year 2020/2021. 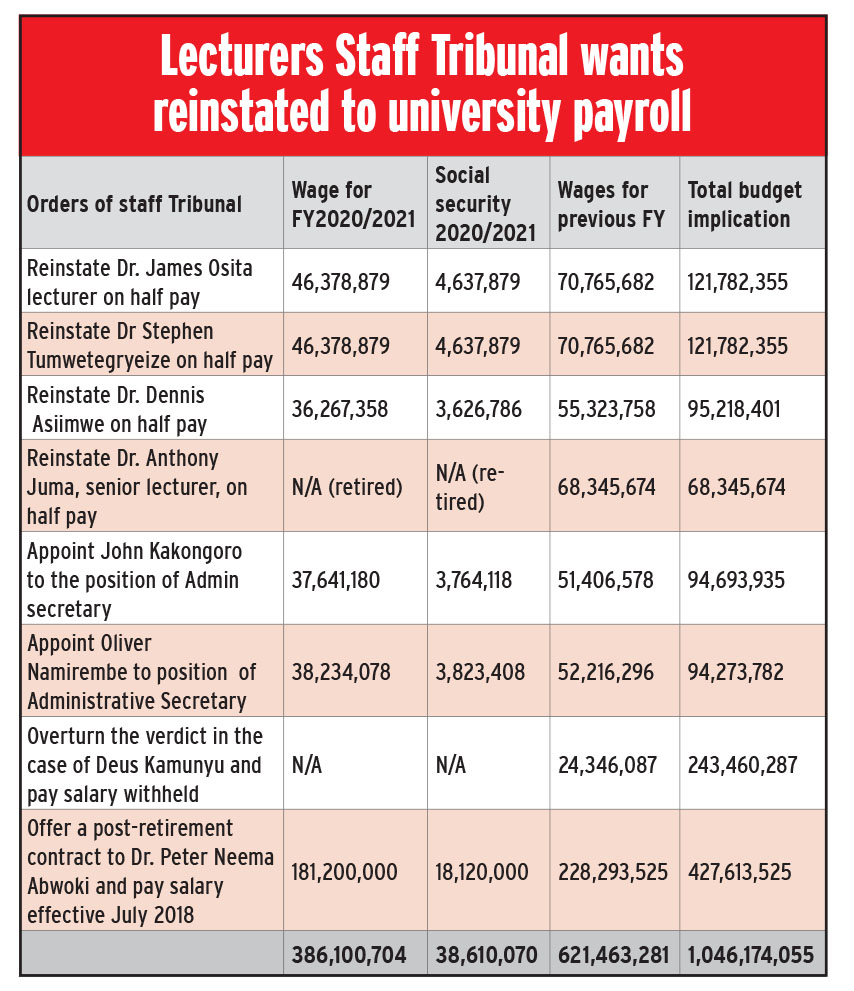 He also noted that the university had reinstated some of the staff on half pay, in line with the current orders of the staff tribunal.

"This is because the appeals of such staff are still being heard by the tribunal. Should the appeals be decided in favour of the appellants, additional wage implications, which are not stated, will apply. The university will inform you (Muhakanizi) accordingly," Kiranda wrote.

The staff who are supposed to be reinstated on the university payroll include Dr Stephen Tumwetegyereize and Dr James Ocita, who have been on half pay since December 2018, until the determination of their case before the tribunal. Each owes the university sh121m.

The other lecturer who was recently reinstated is Dr Deus Kamunyu, the chairperson Makerere University Academic Staff Association (MUASA), who was suspended in May last year by the appointments board for six months without pay. In October this year, the staff tribunal declared Kamunyu's suspension null and void and reinstated him.

The staff tribunal also directed the university to offer a postretirement contract to Dr Peter Neema Abwooki, pay him salary effective July 2018 and also promote him to professor.

Abooki had appealed against the decision by the university's appointments board not to promote him to the rank of full professor.

Abooki had in his appeal noted that he was dissatisfied with the appointments board's decision to remain silent on his promotion for nearly two years, despite his application.