The quality of fish in Uganda has improved over the years, thanks to a number of measures adopted by the Government.

The quality of fish in Uganda has improved over the years, thanks to a number of measures adopted by the Government.

The quality of fish in Uganda has improved over the years, thanks to a number of measures adopted by the Government. Previously, it was common to find fish contaminated with sand or soil.

Different procedures have been put in place to ensure safety. The turnaround in the fishing industry can be traced back to 2013, when President Yoweri Museveni deployed the UPDF to crack down on illegal fishing activities which were threatening the industry.

Adoa encouraged fishermen to embrace value addition to improve on their earnings. She also warned them against illegal fishing activities. She also commissioned a modern fish landing and processing facility, at Mahyoro.

Selective gears such as restrictions on the mesh size or spacing of the meshes aims at achieving and maintaining the most productive age structure of the stock. This allows immature fish to grow larger and more valuable and to possibly reproduce before they are caught.

Muhammad Matovu, a leader at Kawongo landing site in Kayunga district who has been at the lake for the last 15 years, says the fishing gears and methods prohibited in Uganda are beach-seine and under sized nets below five inches.

The beach-seine is operated as a drag gear at the lake bottom near the shoreline on shallow sandy, rocky gentle shores usually during calm nights and around dawn. The cast net is normally thrown to cover a certain area depending on the circumference. When thrown over a school of fish, the weighted edges sink rapidly enclosing any fish within the covered area.

Fish is caught either by entanglement or by gilling by the net meshes as they try to swim through the net. John Kyetume 52, has been at Mahyoro landing site on Lake George for over 30 years catching fish.

He says other prohibited fishing practices are the joined gill net to form 52 meshes deep, which normally has 26 meshes deep. Mosquito nets have been normally used for cropping rastrineobola argentae (mukene) using the help of light.

It attracts fish to congregate around the light then the net is pulled towards the shore from the rear of the lamps. Tycooning is a method whereby a form of stick with hollow ballast ends is used for beating the water to make noise and scare the fish into a set net usually gill nets. It is aimed at increasing the catchability rate of the gear.

Fish poisoning is when chemicals are applied in water and it dissolves in it. And as the fish inhales the poison, becomes unconscious and loses balance. Therefore, they begin to float on the water surface, where it will then be collected into the boat. Before the ban, fish poisoning was common in many districts, especially on Lake Victoria shores and the associated islands.

There has also been the use of mono-filament twine method, which grips firm and cut deep into the fish flesh. However, all these banned fishing methods have had one thing in common that they destroy the young stock, destroys breeding and nursery grounds, leading to the disturbance of aquatic ecosystem.

Nicholas Abomugisha, the senior fisheries officer in Mbarara says the ministry has been giving support and guiding fish farmers.

HOW SECTOR HAS IMPROVED

In 1990, 1.6 tonnes of fish were being harvested, and the amount rose to around 11 million tonnes in 1997. Fish harvests reached their peak in 2005 when 39 million tonnes were harvested. But the increased export of fish also came with several negatives. These included over fishing, hence dwindling fish stocks.

According to the agriculture ministry, by 2008, harvests had dropped to 24 million tonnes. They were estimated to have dropped to around 18 million tonnes by 2010. However, renewed enforcement of good fishing practices on the lakes , headed by the UPDF soldiers has seen volumes start to go up gradually.

Last year, the agriculture ministry developed guidelines through the Directorate of Fisheries Resources to ensure that the country maintains the exemplary position as one of the leading exporters of quality fish on the regional and international market.

Among these was a code of good practice for safety and quality assurance for fish maws. According to the ministry, the code provides general guidelines on the recommended best practices for production, preparation, processing and handling fish and fish products by all operators involved at various stages in the artisanal fishery, from capture to sale.

As a country Uganda has recorded an increase in production volumes and export value for fish and fish products due to increased enforcement on Lake Victoria, Lake George, Lake Edward, Lake Albert and Lake Kyoga along with the River Nile.

Declining fish stocks in January 2017 forced President Yoweri Museveni to deploy soldiers under the Fisheries Protection Unit to fight illegal fishing on all major lakes in the country.

The deployment of soldiers followed a survey by National Fisheries Resources Institute, indicating that Nile Perch catches declined by 46% between 2011 and 2015. However, the Uganda portions of the Lakes: Victoria), Kyoga, Albert, George, Edward, can produce upto 447,000 tonnes of fish per annum if we eliminate the cancer of bad fishing by parasites in our society. Commenting on enforcement locals at Mahyoro praised the UPDF for restoring sanity at the lake though at first, they were mistreated. 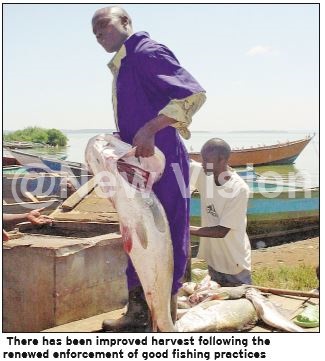 Last year, a survey report by the Uganda Bureau of Statistics (UBOS) shown that average prices for fish dropped by 12.4% in December 2018, lower than the previous year.

The drop was largely a result of the fall in prices for fresh water fish, especially Nile Perch, following a temporary freeze on fishing to allow fish stocks to recover. Nile Perch is Uganda's most valuable fish species.

An aquatic study conducted in Lake Victoria by Uganda, Kenya and Tanzania in 2017 revealed a 30% increase in stocks in one. The UBOS survey, carried out between September and October, shows that quantities of Nile Perch increased from 393,335 metric tonnes last year to 457,248 metric tonnes this year. Across the entire East African region, the volume of Nile Perch in Lake Victoria was found to have grown from 0.85 million tonnes in 2016 to 1.12 million tonnes in 2017.

Bake a cake for your family

Bake a cake for your family