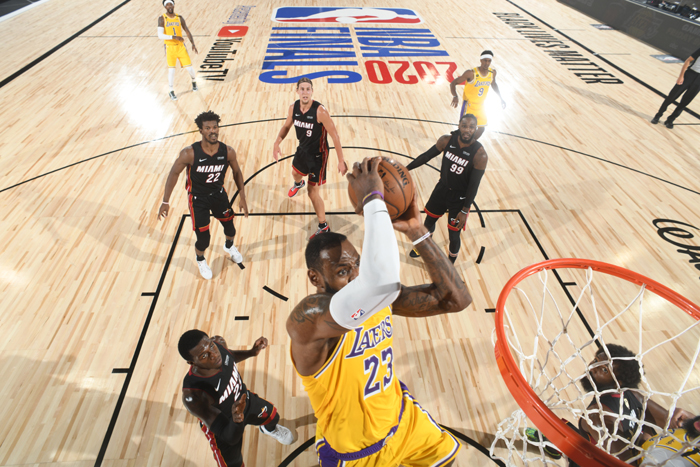 The Los Angeles Lakers manhandled the Miami Heat 116-98 in game one of the NBA Finals on Wednesday in a dominant start to their quest for a 17th championship.

After a 10-year absence from the championship series, the Lakers returned with a vengeance in the NBA's quarantine bubble in Orlando, Florida.

Anthony Davis, in the best-of-seven title series for the first time after years of frustration in New Orleans, scored 34 points to lead the Lakers.

LeBron James, the  fourth player to make a 10th appearance in the NBA Finals, was just shy of a triple double with 25 points, 13 rebounds and nine assists.

The Western Conference champion Lakers, trying to tie the Boston Celtics' record of 17 NBA titles, led by as many as 32 points.

The Heat, the Eastern Conference fifth seeds who swept the Indiana Pacers before toppling the top-seeded Milwaukee Bucks and the Boston Celtics on the way to the Finals, showed no sign of nerves in an energetic start that saw them take a 13-point lead midway through the first quarter.

But the Lakers inexorably seized control, building on a three-point halftime lead as the Heat saw key contributors Goran Dragic and Bam Adebayo exit with injuries and star forward Jimmy Butler hobbled by a twisted ankle.

Butler still scored 23 points to lead the Heat, who will try to bounce back in game two on Friday.