Home
NEWS
Media
Supplements
Tenders
Notices
People had to relocate to higher ground and many took shelter in school buildings.

People had to relocate to higher ground and many took shelter in school buildings.


Residents of Wakawaka lakeside settlement and the adjacent areas in Bugiri district are living in misery after the rising Lake Victoria water levels flooded their homes.

Peter Okello, a resident of Wakawaka landing site, said the floods that worsened with the rainy season in March, led to the flooding of most beachside residences.

"People had to relocate to higher ground and many took shelter in school buildings," Okello said.

Eseza Namusobya, a resident, said since disaster struck, local authorities have done little to alleviate the plight of the displaced persons.

She argued that almost six months after lakeside homes got flooded, no one has received relief.

Adam Ndyambi, the Bulidha LC3 chairperson, said whereas members of the community moved into nearby school compounds, it was not a permanent solution to their dilemma.

"This was a temporary solution as they awaited a clear resettlement plan from the authorities. That is what we are all looking forward to," Ndyambi added.

"The green water weed makes it

difficult to differentiate between a flooded compound and one with ordinary grass cover. This poses a threat to our children who are always at home due to the lockdown," he said.

Dr Callist Tindimugaya, the commissioner for water resources in the environment ministry, attributed the flooding to the impact of human activities on the lake.

He said deforestation, settlement and farming on lakeshores and wetlands, could have reduced the marshland capacity to contain inflows into the lake, thereby resulting in the large volume of water.

"It was only a matter of time for such disasters to strike," he added.

"People collect polluted water from the lake. I fear that soon, we may have cholera and other waterborne diseases in this community," she added.

Marijan Azalwa, the Bugiri district chairperson, encouraged locals to utilise the boreholes on the upper sections of the parish.

He, however, noted that the borehole is located 5km away from the camps, making it diffi cult to access it.

"The Government had set up a water purification plant at the beach about 20 years ago.

Unfortunately, it was flooded and was abandoned," Waidha said. 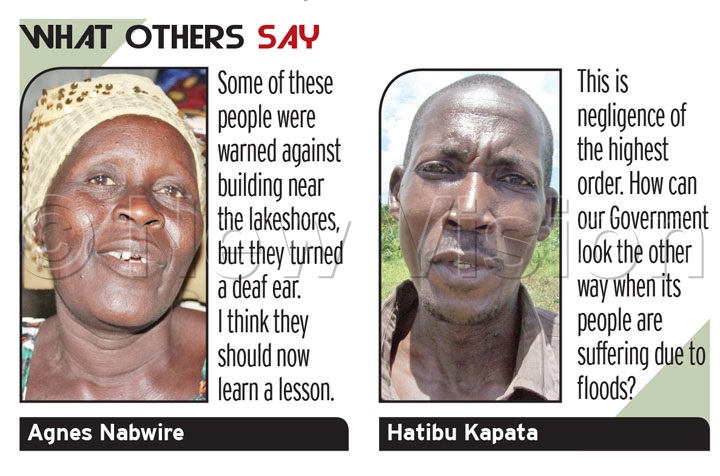 Azalwa said there are plans to procure land in the area, to relocate all the affected persons.

Ndyambi reechoed a similar view, saying the four-acre public land, adjacent to the landing site, would offer a resettlement base for the affected families.

"Since it is nearby, there would be no need for hefty transport costs," he added.

Speciosa Nabwire, a fishmonger's wife, said her husband has since abandoned their partially-flooded Bugiri home and have soght refuge at the co-wife's residence on Sigulu island.

"He put a few of his clothes in his boat and headed out towards Sigulu. That was in April," Nabwire said.

She said a few sandbags and hand-dug ditches have helped keep the rising waters at bay.

She also uses basins to clear the flood waters that often get into the house.

Nabwire noted that, of late, her two sons, who are barely 10 years old, go fishing with crude fishing rods made of reed stems, to get some food for the family.

"When we have plenty of fish, we sell it and use the money to meet other domestic needs," Nabwire added. Asuman Waidha, the Wakawaka LC1 chairperson, said about 90 households have been affected by the floods. He noted that a formal complaint was forwarded to the Bugiri local government, seeking a way forward for the displaced people.

Moses Othieno, a resident, said he has been living in a makeshift structure at Wakawaka Primary School for four months now. "We were promised space to build new structures, but nothing has been done," he said.