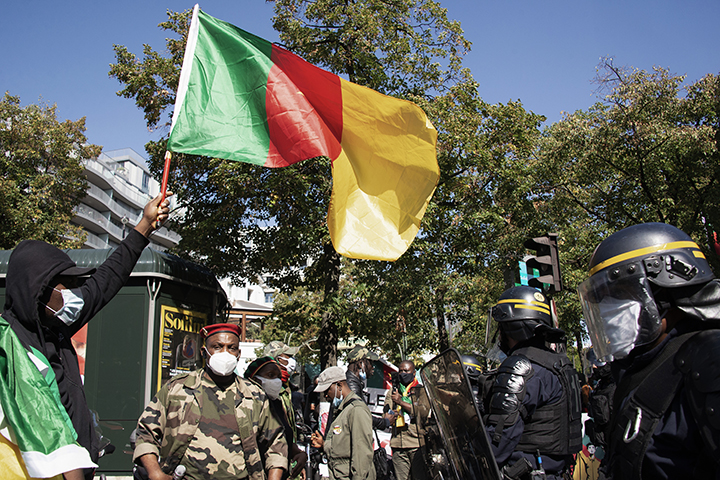 The police and soldiers had taken up positions in several cities the night before.
TOP News STORY
Tue Sep 22 2020 .
Cameroon police use tear gas to break up protest

The police and soldiers had taken up positions in several cities the night before.

Police on Tuesday used tear gas and water cannon to break up a protest by hundreds of people in Cameroon's economic capital Douala calling for an end to bloodshed in the country's anglophone regions.

Several parties, including that of opposition leader Maurice Kamto, had called for "peaceful marches" against President Paul Biya, 87, who has ruled the central African country with an iron fist for nearly 40 years.

The marchers called for a ceasefire and negotiations to end a long-running conflict between anglophone separatists and security forces that has claimed more than 3,000 lives.

The protesters also sought a reform to the electoral system.

Several hundred marchers converged at a major intersection in a working-class district of Douala, shouting slogans such as "Enough Is Enough" and "Paul Biya Must Go" before police dispersed them, making some arrests.

"In what country do we live, where young people die, suffer? We're fed up, it's a cry of despair and it's time for things to stop," said protester Martin Nyemb, a student at the University of Douala.

The police and soldiers had taken up positions in several cities the night before.

In Yaounde, the capital, no major demonstration had taken place by mid-afternoon as police stopped dozens of people including journalists.

Clashes erupted between police officers and a dozen demonstrators in the Etoudi district where the presidential palace is located, an AFP journalist reported.

Last month, Kamto, head of the Movement for the Rebirth of Cameroon (MRC) and runner-up to Biya in a 2018 election, labelled his government a "kleptocracy".

He accused Biya of "ruling through disdain and terror" and urged a "giant campaign calling for the pure and simple departure of Mr Paul Biya from power".

Biya on September 7 called regional elections for December 6 -- the impetus for Tuesday's marches.

The government had earlier this month banned all demonstrations, justifying the move by the coronavirus pandemic.

It also said it would "suppress" any gathering under a 2014 law to protect against acts of terrorism.

Human Rights Watch said late Monday the ban was a "thinly veiled attempt by the Cameroonian government to use the Covid-19 pandemic and the draconian anti-terror law as a pretext to quell the right to assemble".

Meanwhile in Paris, about 50 Kamto supporters who demonstrated Tuesday outside the Cameroonian embassy were met with tear gas after clashing with riot police, an AFP journalist saw.

Protesters waved Cameroonian flags and held posters reading "Chase away the Tyrant" and called for the end of "Francafrique", the term for France's post-colonial meddling in Africa.

Some threw chairs from a nearby restaurant at police, and traffic was blocked as officers repeatedly dispersed the crowd.

"We protest against the bloody and barbaric dictatorship that has been raging for 38 years" in Cameroon, their spokesman Robert Wanto told AFP.