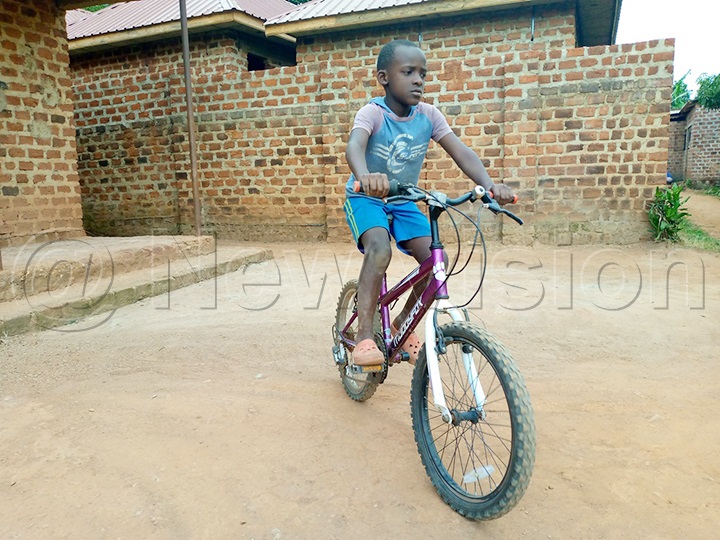 One of the sectors that has been greatly affected by COVID-19 is education.   Edith Nankabirwa, a single mother of three residing in Lwadda, Wakiso district, is worried her eight-year old, second-born daughter has gained too much weight, since schools were closed in March.

At such a tender age, the girl weighs 40kg, yet the average weight is supposed to be 33kg, according to Haspha Nassolo, a nursing officer at Joint Clinical Research Centre.

"The doctors advised me to reduce the time she spends watching TV and eating," the worried mum says.

They advised me to encourage her to get involved in physical exercises and as much outdoor activity as possible," she says.

The World Health Organisation (WHO) defines childhood obesity as a condition where excess body fat negatively affects a child's health or wellbeing.

As methods to determine body fat directly are difficult, the diagnosis of obesity is often based on Body Mass Index (BMI).

Due to the rising prevalence of obesity in children and its many adverse health effects, it is being recongnised as a serious public health concern.

The term overweight rather than obese is often used in children.

When COVID-19 came and schools closed many children are less involved in physical exercises.

According to WHO's Global Database on child growth and malnutrition, childhood obesity is associated with serious health problems and the risk of premature illness and death later in life.

More so, children who are overweight stand a high chance of being overweight as adults, which comes with health-related conditions, such as cardiovascular (heart) diseases.

In developing countries with emerging economies (classified by the World Bank as lower to middle income countries), the rate of increase of childhood obesity has been more than 30% higher than that of developed countries.

Why children are not active during lockdown

This is due to many factors, including watching television, excessive homework and holiday packages and lack of physical exercise.

Robert Kagawa, a trained physical educator at Kampala International School Uganda (KISU), says for healthy growth and development, children need to be active at least twice during the day.

"Physical exercises make children's brains more alert and also improve academic performance. They make them more fit and the children feel happy. Children develop self-confidence and improve their learning and attention during these exercises," he says.

"It is a parent's responsibility to make sure their child gets the right amount of exercise on a daily basis. If a child moves around, it does not mean they are getting the right type of exercise, as some of the muscles are often not exercised. Once or twice a day will be good," she says.

Nassolo says children are naturally energetic, but without encouragement, they may become inactive.

"Many children spend more time sitting in class, watching TV and some spend time sitting in school buses, others at computers for a long time (online classes) and do not want to move," she says.

"It is the responsibility of a parent to keep a child active. If you as parents exercise, then the children will also be encouraged to start."

Swimming, walking and running increase the intake of oxygen by the body cells and also improve blood circulation.

This makes the child's brain relatively more alert and helps the child to perform better at school.

According to Dr. Hassan Mayanja in Kampala, exercises such as walking enhance blood circulation and emotional development.

"It also improves the physical fitness of the child. For parents who have children between four and five years, these children can participate in games such as jumping, running and skipping. Such games can improve your child's social skills," he says.

Mayanja explains that children above five years need guidance from a trainer when they are exercising.

Aerobic activity should be done by your child for at least an hour each day, Nassolo says, because it helps strengthen the child's muscles and bones.

According to Kagawa, it is important to involve the whole family in games such as bicycle riding, swimming, football, jogging, dancing or any other exercise.

"Exercising together with your children may also increase the amount of quality time you spend as a family," he says.

Kagawa says physical education programmes in schools are needed to increase competence, health and enjoyment of physical activity for all children.

Physical education can be a major force in helping children socialise with others successfully and provide opportunities and skills from others.

For children who are 5-10 years, Mayanja says they need to increase their intensity during workouts such as walking and cycling to increase coordination and alertness.

He says children above 10 years can specialise in any sporting activity of their choice and can also be spotted for their talents, which a trainer can develop.

Childhood obesity cases have increased dramatically since 1990, according to the report by Harvard T.H. Chan, a school of public health.

Obesity, overweight on the rise

According to the World Health Organisation, in 2014, more than 1.9 billion adults were overweight. Of these, over 600 million were obese.

In 2013, 42 million children under the age of five were overweight or obese. Once considered a high income country problem, overweight and obesity are now on the rise in low- and middle-income countries, particularly in urban settings.

Adolescence — the age when healthy foods are not 'cool' to eat, teens spend most of their free time away from home, which means parents cannot control what they eat. And when they feel fat, they try to lose weight in the most unhealthy ways.

Teenagers spend a lot of time away from home. They are, therefore, prone to make food choices which may not be healthy. Crisps, doughnuts, soda and artificial juice concentrates, chips and sausages are an example of such foods.

The requirements for energy and other nutrients increase to meet the demands of growth and development during teen age. Adolescent growth accounts for wide fluctuations in physical size, metabolic rate, food needs and even illness.

Sharon Naluwende, a nutritionist at Mulago Hospital, says although the period when teenagers experience rapid physical growth is relatively short — only two to three years — psychosocial development continues over a much longer period.

Naluwende says the pressure for peer group acceptance is strong and they give in to fads in dress and food habits. Also, teenagers tend to experience social tension and family conflicts, which may have nutritional consequences.

"Teenagers eat away from home more often and develop a snacking pattern of personal and peer group food choices," she explains.

Naluwende emphasises that a teenager's health and diet are directly related.

"A nutritious diet has short and long term benefits, while an unhealthy one can cause physical, mental and emotional problems, as well as chronic illnesses that last into adulthood.

Nassolo, says a teenager's body undergoes a lot of changes that he or she may find overwhelming and it has effects on the teenager's eating.

Naluwende says with the rapid growth during adolescence, their bodies have a high demand for energy foods, proteins, vitamins and minerals.

"Although individual needs may vary, girls require fewer kilocalories than boys, based on their smaller body size and body composition.

Sometimes, the large appetite characteristic of this rapid growth leads adolescents to satisfy their hunger with fast foods that are high in sugar and fat, yet low in essential protein, vitamins and minerals," she says.

Naluwende adds that adolescent growth demands an increase in protein foods to support the puberty changes in both sexes, and the developing muscle mass in boys.

Nassolo says such foods include fish, eggs, beans, milk and groundnuts.  Minerals are also key to the development of teenagers.

"The calcium requirements for all adolescents is 1,300mg a day to meet the demands for bone growth," Naluwende says, adding that poor bone mineralisation in adolescence increases vulnerability to bone fractures at a later age.

When it comes to vitamins, the B vitamins are needed in increased amounts in order to meet the extra demands of energy metabolism and tissue development.

Vitamin D helps in absorption of calcium and sunlight is the best source.

Naluwende adds that intake of vitamins C and A may be low because of erratic eating habits among teenagers and a tendency of eating fewer vegetables and fruits.

Parents need to emphasise these foods and also provide them.

Naluwende says if one is vegetarian, it is important that the diet is balanced and has all the necessary nutrients. A vegetarian diet needs to include alternative sources of protein.

Boys fare better than girls in benefiting from their nutrition because of their large appetites and the sheer volumes of food they consume. But adolescent girls may be less fortunate.

Naluwende says because puberty in girls brings about increased fat deposits and many teenage girls are relatively inactive, it is easy for them to gain weight.

Many teens also lead busy lives. They have school events, sports and other group activities.

They like foods that look good and choose the same foods over and over again, whether healthy or not.

Many teens also skip breakfast, while some do not want to spend time preparing healthy food.

Unfortunately, health is the least of their concerns at this stage.

"The need to be thin causes some adolescent girls to adopt nutritionally inadequate diets, thus they develop anorexia.

Adolescent boys trying to increase their muscle mass may resort to unproven and potentially dangerous supplements or eat high fat foods in an effort to obtain more kilocalories," she says.

Nassolo says when working with teens who claim to be dieting, it is necessary to talk with them individually about what kind of diet they are following.

"For some teens, dieting means drastically reducing their food intake or choosing foods erroneously believed to have special effects on appearance. For others, dieting refers to healthy practices like increasing their fruit intake and vegetables or cutting down on fats and sweets," she says.

"Poor eating habits are detrimental to your child's school performance, wellbeing and development. By spending quality time with your teenager and trying to understand his or her ideas about life and food, you can better guide them to develop positive habits and make healthy food choices," advises Nassolo.

She advises parents to set positive, consistent examples of healthy food choices, eating habits and other lifestyle issues as they spend more time with their children.

"Love and nurturing does not mean buying expensive foods and things. It means genuine concern, care, eating at least one meal a day with your child and sparing time to listen to his or her concerns, however trivial," Nassolo says.

She also says physical educators, health teachers, nutritionists and parents, must work together to develop programmes that will reach teenagers at school and home.