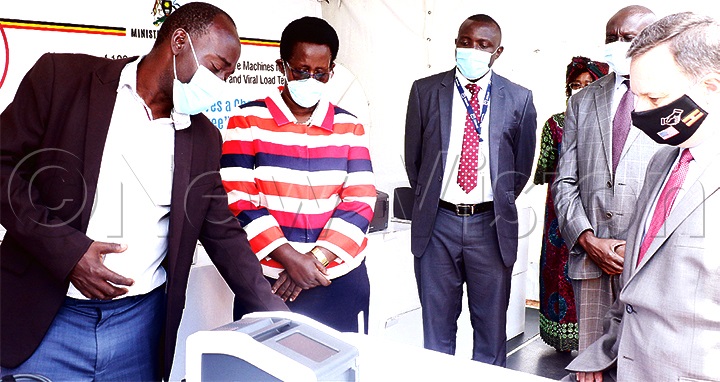 KAMPALA - Early HIV diagnosis and viral load testing in infants is expected to improve after the acquisition of 100 point of care HIV machines by the health ministry.

The machines, Abbot m-Pima, were donated by Abbot diagnostics, a USbased company that funds research in disease diagnostics technologies around the world.

The machines, which are portable, provide a short turnaround time in HIV and viral load testing among infants.

In 2012, the health ministry established the system, where 100 hubs were identified to act as collection centres for samples from different health facilities. The samples would then be transported to CPHL for testing.

All children born to HIV positive mothers are subjected to HIV test in their infancy. The first test is done in the first six weeks of birth, the second after nine months and the third at 18 months.

While speaking at the handover ceremony at the health ministry offices in Nakasero, Dr Henry Mwebesa, the director general of health services, said the donation will supplement the capacity of CPHL in HIV testing since there will no longer be any need to transport samples to the central lab.

He said since the machines are a donation, the ministry's role will be to ensure that the reagents and other supplies needed for testing are available. Maintenance of the machines will also be done by Abbot.

"This is a cost-effective approach and I wish to emphasise that we need to explore this method further, in our diagnostic interventions. This is a good innovation, which must be encouraged and supported," he said.

Dr Charles Olaro, the director of clinical services said the machine can test between seven and eight samples per day.

The machines will be placed in 100 regional health facilities, including general hospitals, health centres IV and III.

Medical staff working in the 100 selected facilities, which are both public and not for profit facilities, will be trained on how to operate it.

The deputy chief of Mission at the US Embassy, Christopher Krafft, said the machines will ensure access to early diagnosis and also ensure that vulnerable children get onto critical lifesaving treatment on time.

He added that due to inaccessibility of testing in the last two decades, the US has been supporting Uganda in addressing the impact of HIV, and substantial progress has been made towards elimination of mother-to-child transmission of HIV.

He said in the last five years, the coverage of anti-retroviral treatment among HIV pregnant women has seen a notable reduction of mother-to-child transmission of HIV from over 5% to just 2%.

The event was also attended by officials from the health ministry, led by the permanent secretary, Dr Diana Atwine, representatives from UNICEF and the Centre for Disease Control and National Medical Store.

Atwine said the machines will enhance the care of services, especially the diagnosis of early infant HIV infection.

"By receiving the 100 m-Pima machines, we are simply talking of quality of care because you don't delay. You are able to intervene quickly. It means enhanced services; we will be able to reach more people," she said.

She said this will go a long way in ensuring that Uganda meets the 95-95-95 goal that has been set in regard to HIV epidemic control and elimination.