Bwire displaying the Building Control (fees) Regulations 2020, during a meeting at her office in Kampala on Tuesday. Photo by Shamim Saad

According to the Building Control (fees) Regulations 2020, which were gazetted on September 4, any structure, including a house, will be required to obtain an occupation permit before use.

According to the rates which the New Vision has obtained, cities, municipalities, town councils and districts, will have uniform rates.

For instance, a building plan in Jinja or Gulu, which were granted city status this year, will be charged the same as those in Kampala.

This implies that for any building to be built in Budondo sub-county, now part of Jinja city, the owner will be charged the same like a building owner in Kololo, an upscale suburb in Kampala.

According to the building rates, Bugiri municipality in Busoga will charge the same amount of money like Kira and Nansana Municipality in Wakiso district.

These were set by the respective physical planning units at the different local governments.

The new building fees were disseminated by Gen. Edward Katumba Wamala, the transport minister. In an advert which ran in New Vision Tuesday, Wamala said: "The fees specified in the schedule to the regulations shall be paid in respect of the matters they relate to under the Building Control Act, 2013 and Schedule 4 of the Building Control Regulations, 2020."

According to the regulations, the fees will be used to scrutinise drawings, plans and documentation, including verification of applications for the building permits.

Both applications for the building permits will be collected by respective local governments and the funds will be wired to the consolidated funds.

"The entire country is a planning area; all villages have physical development plans. This is why we have all types of buildings covered," Bwire said.

She added that the new rates will help streamline construction and reduce cases of collapsing buildings.

Each building permit will expire in five years. When the building is not completed within that time, the entities will be required to renew the permit and pay again.

With exception of Class C structures, both Class A and B will attract an annual inspection fee, until the building is complete.

In cities, both A and B class buildings, sh1,000 will be charged per square metre per year for the inspection permit, sh750 in municipalities, sh700 in town councils and sh300 in districts. 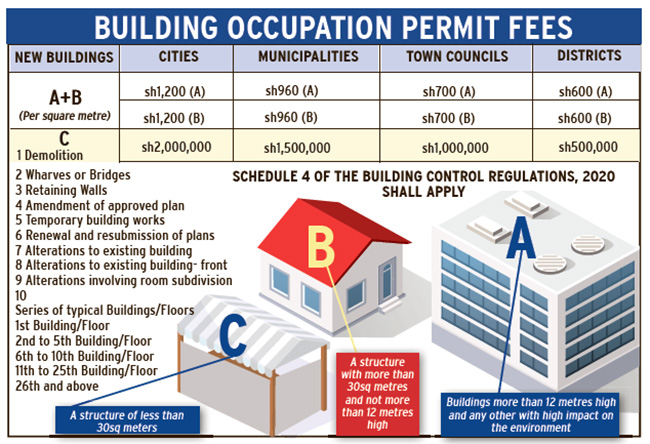 Under the new guidelines, every building will be required to have an occupation permit before it is used.

Class C buildings, including grass-thatched houses, will have a flat rate of sh30,000.

However, to demolish a Class C building, it will attract sh2m in cities, sh1.5m in municipalities, sh1m in town councils and sh500,000 in the rest of the districts.

For classes A and B, an occupation permit will be charged at sh1,200 per square metre in cities, sh950 in municipalities, sh700 in town councils and sh500 in the rest of the district.

For classes A and B, an occupation permit will be charged at sh 1,200 per square metre in cities, sh950 in municipalities, sh700 in town councils and sh500 in the rest of the district.

A section of local government leaders welcomed the new building charges, saying they were handicapped and that they did not have powers to conduct certain inspections.

According to the Building Control (fees) Regulations of 2020, structures are categorised in three classes, each with different rates, according to location — city or municipality. The categories are Classes A, B, and C and they will be charged per square metre.

CLASS B: This is any structure with more than 30 square metres and not more than 12 metres high, above the ground. Bwire said most residential homes, especially bungalows, fall under this category. In cities, Class B will attract sh1,700 for each square metre, sh1,300 in municipalities, sh1,000 in town councils and sh950 at district local governments, such as sub-counties.

CLASS A: This covers buildings more than 12 metres above the ground or those with high impact on the environment. This also covers any structures set up in protected areas, such as wetlands, forests, national parks and reserves, among others. It also includes any structures, such as homes and buildings, set up on the shores of the lake, river banks and beaches. It also covers storeyed buildings, including schools, commercial buildings and factories, among others.

Bwire explained that even buildings classified in A and B categories can fall under this category if they have an impact on the environment.

Class A building permits will be charged at sh2,200 per square metre in cities, sh1,700 in municipalities, sh1,300 in town councils and sh1,100 in sub-counties and district local governments.