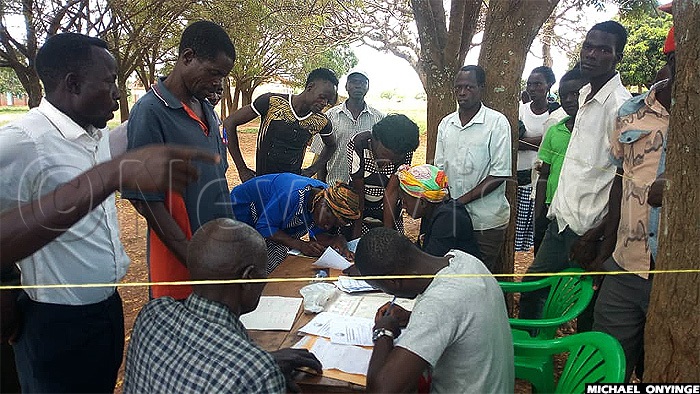 Today, Ugandans go to the polls to elect their sub-county leaders.

Agents of candidates in the LC3 elections of Kakure sub-county in Kalaki district have presented their grievances to the NRM district registrar, Richard Ekiu. They allege that chaos arose and no vote counting was done. The two villages involved are Akura and Ojele - both in Kakure sub-county.

Adyatu is currently the parish councillor while Euchu is the district councillor. Akao is a retired primary school teacher.

All are battling for the LC3 NRM flag-bearer for Kakure sub-county. Registrar Ekiu says he is waiting for an official report from his polling officials.

At one of the polling stations in Kabutemba, voting has been canceled by the Kiboga town council registrar, Ausi Ssemakula, after the returning officer, Jamil, sustained serious injuries after being attacked by some voters.

He is currently admitted at Kiboga Main Hospital. The polling station was not armed by security.

Early jubilation in Bungokho in Mbale.

Security has been reinforced at Bukasa polling station in Bweyogerere amid rising tensions between the rival camps of Majid Kiwanuka and Isaac Ssenkubuge, reports New Vision's Alfred Ochwo.

The RDC unsuccessfully tried to reorganize the election proccess.

One of the accusations flying around is that some people from neighbouring villages were ferried in to vote at this polling station.

Voting at Kakira town council headquarters for the LC3.

Police in Adjumani fired teargas to disperse supporters of an LC3 candidate for Adjumani Town Council, who were engaged in an early victory procession in Adjumani town.

The supporters overpowered Police along Market Lane, where the office of the candidate is located, and carried on with the premature jubilation.

Security has been tightened at Zimbena Gardens in Nansana division during election of youth leaders at sub-county level, reports Vision's Steven Kiragga.

Competition has been stiff between the camps of NRM and NUP.

Others that have attained victory include Margaret Nampijja (NUP) with 31 votes for women's affairs, independent Willy Kalule with 31 votes.

In Nabweru, the LC3 elections rivalry is between the NRM and the National Unity Platform (NUP).

In Kiboga town council, New Vision's Simon Mugabe reports, the voting will only be in one ward out of the four. The other three are unopposed. And in one of them, Kilurumba ward, Mulangila Suuna has just withdrawn from the race, citing intimidation.

Ameto has condemned the any act of violence involving aspiring leaders and their supporters.

As the district's head of security, he has ensured Police deployment.

In Kaberamaido district, New Vision's Michael Onyinge reports of clashes between supporters of LC3 aspirants reported in Kaberamaido town council. The incumbent David Oswald Einyu is tassling it out with Shika Shika Iddi.

The latter has been the ward councillor of Majengo and the chairperson of the general purpose committee. He reported a case of assault on one of his supporters at Kaberamaido Central Police Station.

Meanwhile, Einyu said his supporters were also assaulted. The counter accusations have been going on between both aspirants and their supporters.

In Kaberamaido district, the ruling National Resistance Movement (NRM) will want to reclaim the three sub-counties of Ochero, Aperkira and Alwa from opposition party Forum for Democratic Change (FDC).