The history of air transport in Uganda
Next Story

Rwot Poka said the matter of Mato Oput and the final reconciliation will be handled after the case is disposed of in court and when the late Akena’s family agrees to it.

Rwot Poka said the matter of Mato Oput and the final reconciliation will be handled after the case is disposed of in court and when the late Akena’s family agrees to it.

Matthew Kanyamunyu, 37, is said to have made the confession to the heinous crime at a meeting presided over by Acholi Paramount Chief David Onen  Acana II as a chief witness at the Ker Kwaro Acholi compound over the weekend.

Kanyamunyu, in the company of  his girlfriend, Cynthia Munwangari, allegedly murdered Kenneth Akena, a children rights activist on November 12, 2016. The incident, according to the Police, occurred near Malik Car Bond opposite the main gate of Uganda Manufacturers Association on the Kampala-Jinja road.

Kanyamunyu, the executive director of Quantum Express Logistics, is battling the charges together with his brother Joseph Kanyamunyu and girlfriend Cynthia Munwangari.

A video clip obtained by New Vision shows a visibly humbled Kanyamunyu on his knees being cross-examined by a council of about six Acholi elders over Akena's murder. The source of the widely publicised footage is yet to be established.

In what appears to be a reconciliation process, Kanyamunyu clad in light blue shirt and black pair of trousers didn't take oath, but undertook to tell the truth, close sources said. This was after the council warned him of the likely consequences of telling lies before them.

"To be honest, I would be lying to you if I told you that I have fully comprehended the tragedy of that day up to today. The foolishness, the evil that I exhibited on that day is not something I knew was in me, but now I recognise that deep within me there is evil that I do not know about," Kanyamunyu is heard saying in a video clip obtained by New Vision.

Speaking in English through a Luo interpreter, he added; "It is foolishness that I didn't know about and I don't think I will ever comprehend fully the magnitude and that is the reason that I am remorseful and the reason I ask for your forgiveness, understanding and for time for this healing process to begin and time for me to comprehend the magnitude of the tragedy."

The process was led by the Gulu Archbishop, Dr John Baptist Odama and Rwot Acana II, who was approached by Akena's family after they agreed to the negotiations.

Although the process started a month ago, the first meeting was held in Gulu on Saturday. The prime minister of the Acholi Cultural Institution, Ambrose Olaa, has since confirmed that there has been a lot going on behind the scenes between the two parties.

"This is not unusual. It is a common practice in Acholi. Even where death occurs, people have to reconcile and relationships have to be restored. It is being done at family and clan level at the moment; they will advise us on how far they have reached. The two parties continue the talks. The issue of compensation is being discussed, and if the compensation is paid, the process goes on until Mato Oput," he told New Vision in a telephone interview on Saturday. He, however, said it does not stop the court processes. 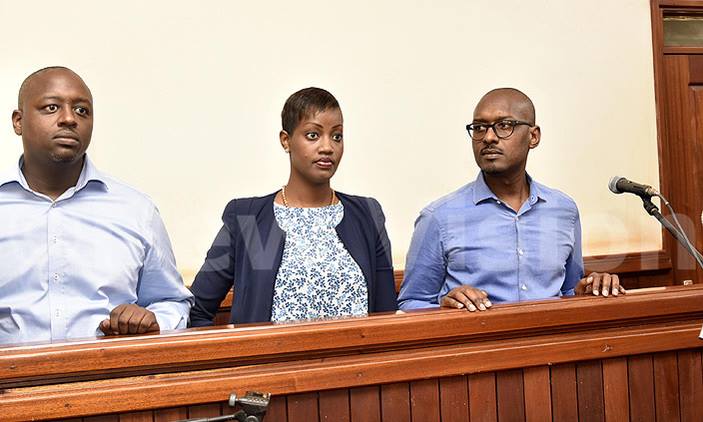 Mato Oput is a reconciliation process in the Acholi culture that is carried out in the case of intentional or accidental killing of an individual. The ceremony involves two clans bringing together the perpetrator and the victim in a quest to restore social harmony.

Mato Oput begins with mediation to establish the ‘truth' and payment of blood compensation according to customs. The final ritual, ‘drinking the bitter root' is a day-long ceremony involving symbolic acts designed to reunite the clans.

This ritual has been successfully done in Acholi in the reintegration of persons formerly abducted or those who voluntarily participated in the Lord's Resistance Army.

The chief of the Guna clan, Collins Venansio Opoka, who is also the chairperson of mediation, Mato Oput and reconciliation at the cultural institution, said Kanyamunyu and his family approached them to negotiate with Akena's family so as to ask for forgiveness.

He said the council of chiefs asked Kanyamunyu's family to bring 10 head of cattle and three goats as the blood compensation (Culo Kwoo) for Akena, in accordance with cultural norms.

Rwot Opoka explains that, whereas the Acholi cultural institution mediation, Mato Oput and reconciliation team doesn't not handle cases of Mato Oput when the subject matter is still before court, blood compensation can be paid.

He stressed that the matter of Mato Oput and the final reconciliation will be handled after the case is disposed of in court and when the late Akena's family agrees to Mato Oput.

Kampala city lawyer Nicholas Opiyo, who reportedly accompanied the Kanyamunyus to the Saturday meeting in Kanyagoga A Cell, Bardege-Layibi division in Gulu city, declined to comment on the matter, saying it was a private meeting. "I don't see how I can comment on that really, it is a private meeting between families," he said.

Efforts to get a comment from Kanyamunyu's senior lawyer MacDosman Kabega were futile. Caleb Alaka, one of the lawyers representing Kanyamunyu in the murder trial, said he was not aware of the ongoing reconciliation negotiation between his client and Akena's family. 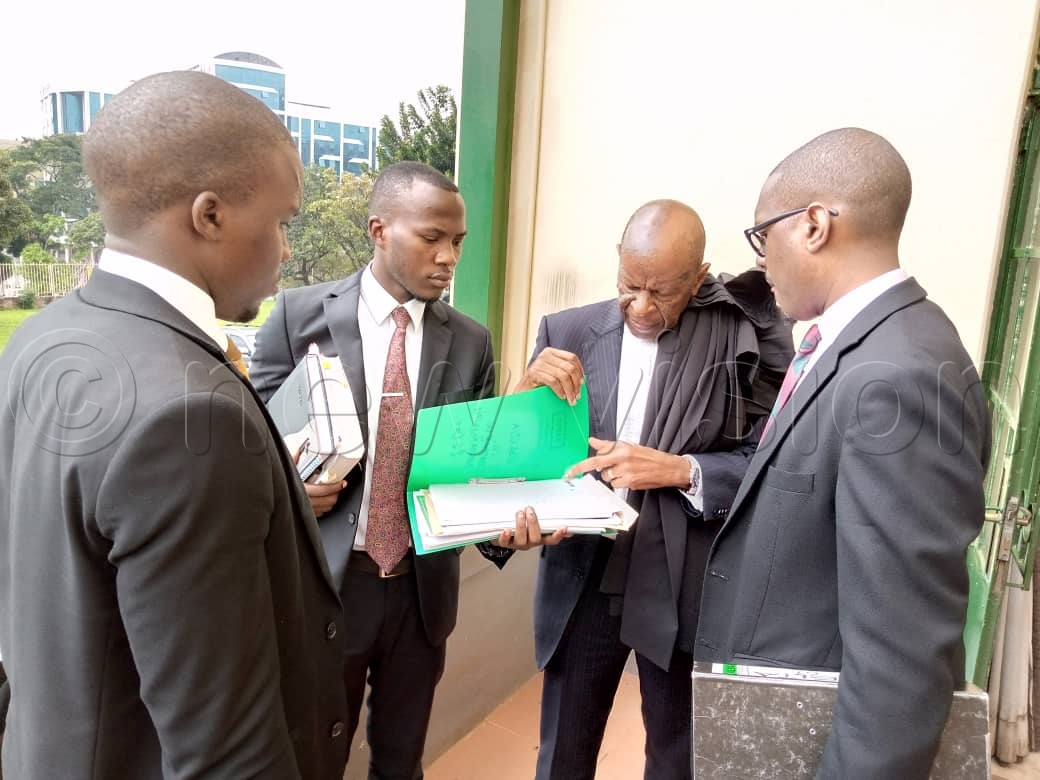 Komakech Henry Kilama, an advocate in Gulu city, says Kannyamunyu could have been advised to opt for reconciliation so that he gets a lesser sentence in court.

"I don't know much about the status of the court case, but maybe he wants to plead guilty, have a plea bargain and pay blood compensation and get a lesser sentence for the alleged murder. In a plea bargain you admit guilt, but for a lesser sentence like manslaughter, not murder. Maybe he is saying he committed the offence, but not out of malice aforethought," he said in an interview yesterday.

Lawyer Erias Luyimbaazi Nalukoola says Kanyamunyu needs another Mato Oput (plea bargaining) with the Director of Public Prosecutions (DPP), noting that it can secure a conviction against him without the deceased relatives' input.

"It is the State which carried out investigations and it has evidence implicating Kanyamunyu which means that the matter is in the hands of the State. Even if Akena's family has accepted his apology, but the State has not accepted, it is useless," Nalukoola said.

He added: "This is a murder case and not defilement where a victim can receive an apology. It is the mandate of the State to protect citizens and their property."

Kanyamunyu's trial was adjourned indefinitely by High Court Judge Stephen Mubiru on February 21, this year. This was after his criminal session ended without concluding the matter.

He returned the file to the Kampala-based Criminal Division of High Court deputy registrar, Mary Ikit, for reallocation in the next convenient criminal session.  Mubiru is the Gulu High Court resident judge.

Before the matter could be reallocated, the COVID-19 pandemic invaded the country, which prompted the Government to institute a lockdown. This compelled Chief Justice Emeritus Bart Katureebe to suspend court trials.

At the time of suspension of the trial, 13 witnesses had testified in the matter, including Robinah Kirinya, a principal analyst from the Government Analytical Laboratory (GAL), who told court that gunshot residues were found on Kanyamunyu's clothes.

Prosecution alleges that the trio and others still at large, on November 12, 2016 on the KampalaJinja road with malice aforethought caused the death of Akena.

In the incident that occured opposite Malik car bond, Kanyamunyu is suspected to have shot Akena in the stomach over damaging his car. Akena died a day after at Norvik Hospital, on Bombo Road in Kampala.

It is alleged that Munwangari witnessed the events. Joseph Kanyamunyu was added to the charge sheet for purportedly hiding the pistol Matthew allegedly used to shoot Akena.

Quoting relatives, prosecution says on his death bed, Akena told his brother that he had been shot by Matthew who later drove him to the hospital.

Storm the target of your love

Love not for the faint-hearted

Love not for the faint-hearted

Why Africa celebrated with BBC's Focus on Africa radio

Why Africa celebrated with BBC's Focus on Africa radio