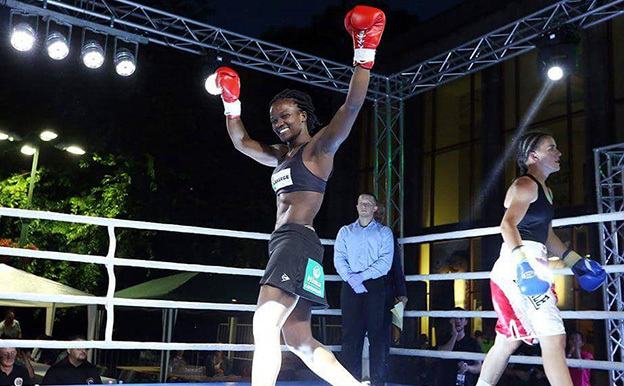 Kickboxing is one of the modern combat sports with demands comprising of a number of specific characteristics that range from the psychophysiological, physical fitness for any athlete to achieve high performances.

Apolot has defied the misconception that kickboxing is exclusive to men. There's a degree of pessimism surrounding her back in the days when she was starting out in the sport.

For a young girl who had drawn inspiration from her father while growing up, participated in other sports like taekwondo where she scooped a gold medal in the 2010 Taekwondo Open and had also a short stint with Proline FC.

She went on to win a gold medal at the 2013 East African -Interclub Boxing championships. 2014 was her career-defining moment when she defeated Jackie Nassimbwa to defend the Uganda Female Kickboxing championships in the lightweight division.

The domestic championships set the pace for Patricia Apolot's success for the continental and world engagements. She trained hard and acquired as many martial as possible.
She is also good at karate, skills she attained from taekwondo. Defeating Ivana Mirkov of Serbia for the World Kickboxing Federation International title in 2015 was such a huge achievement for her.

But defeating the Hungarian reigning champion in Anita Nagy via a technical knockout was not just a big statement but a pain in the arse for those that underestimated her.
She has since built a steady record of wins in the ring. A monster and a giant killer that her opponents must do a lot of homework before they face her.

The bullies, fear, and insults regarding her masculinity never stopped her from chasing her dream. Patricia's legacy is unmatched.

With the progress being made in reducing gender inequality in sports. Sportswomen like Apolot are using the platform to advocate for women to be treated with fairness, respect, and be appreciated for their efforts.

Don't seat on your talent because you're scared of what the society will think of you. Patricia is eating from what she sowed, you can do the same!!