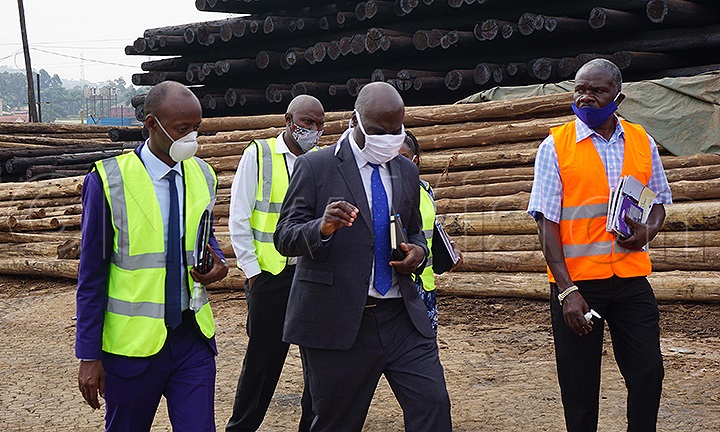 This was reached at after an around-the-country monitoring visit to major infrastructure projects majorly in the electricity subsector that the national planning architect has been undertaking.
TOP News STORY
Wed Sep 02 2020 .
Land, finance biggest challenges in electricity projects - NPA

This was reached at after an around-the-country monitoring visit to major infrastructure projects majorly in the electricity subsector that the national planning architect has been undertaking.

KAMPALA - The National Planning Authority (NPA) has identified land compensation and finance as the biggest challenges impeding the speedy implementation of key flagship projects around the country.

This was reached at after an around-the-country monitoring visit to major infrastructure projects majorly in the electricity subsector that the national planning architect has been undertaking.

The visit comes at a time when the country has just started implementing the third phase of the National Development Plan (NDP III) that shall run from financial year 2020/21 to 2024/25.

The team sought to assess the performance of the flagship projects during NDP II, what is expected of them during the NDP III implementation as well as documenting lessons learnt and challenges faced.

"Some of the institutions we have visited face financing challenges despite having very good plans. They also face a problem of readily available land for construction of these projects. As a result, these projects delay due to issues revolving around land like compensation and ownership," Bwanga said.

Findings of the visit, Bwanga explained, are expected to feed into the implementation process of the third national development plan.

The NDP III lists increase access to electricity, per capita consumption and transmission network and grid reliability as some of its electricity subsector goals that are expected to be achieved by 2025.

Experts and sector players have on several occasions pointed at slow implementation of projects and inadequate transmission and distribution infrastructure across the country as one of the causes of low access to and consumption of electricity.

To salvage the situation, heavy investments in the two segments have been suggested as a requisite, a challenge the electricity subsector is currently grappling with despite heavy investment in the generation segment.

In a bid to tap into the vast market of electricity poles, UEDCL is planning to invest at least $3.1m (about sh11b) in a new pole treatment plant.

The company has already acquired 75 acres of land in Kyampisi, Namayumba town council in Wakiso district where they shall set up a plant.

This is expected to more than triple the company's speciality of creosote-treated poles from 25,000 to 80,000 annually.

The company is also targeting to venture into new specialities like production of concrete and pressure-treated wood poles with hope of churning out 19,200 and 40,000 poles annually.

Paul Mwesigwa, UEDCL's managing director said the development shall be partly funded by internally generated funds and a loan from the Uganda Development Bank (UDB).