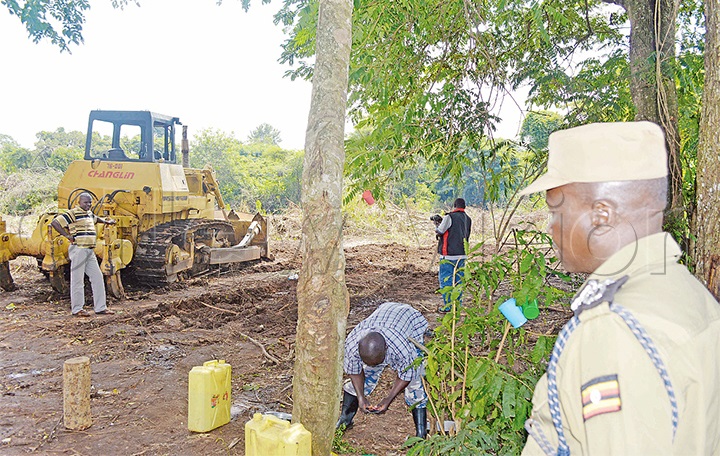 The long-running controversy over the 41,000-hectare Bugoma Central Forest Reserve has taken a new twist. Hoima Sugar Limited accuses the National Environment Management Authority (NEMA) of reducing the acreage for sugarcane growing from the initial 22 square miles to only nine square miles in a decision taken by the regulatory body on August 14.

In the same measure, a group of 19 civil society organisations, under Save Bugoma Group, are also up in arms against NEMA over the giveaway of the forest land to Hoima Sugar Limited for sugarcane growing.

The top government environment watchdog also ordered Hoima Sugar to preserve 0.156 hectares for the cultural site and conserve 6.17 square miles as a natural forest. This totals to 21.54 hectares of land (about 22 square miles) or 5,579 hectares.

However, Hoima Sugar says the reduction of the initial 22 square miles to only nine square miles deprives the sugar company a right to grow sugarcane on the entire 21.54 square kilometres.

"It is obvious that the environment body fell for the misleading campaign and arguments by self-seeking environment activists who pretend to be fighting to protect the forest," Sheila Nduhukire, the communications and public relations officer for Hoima Sugar Limited, said.

Calling Hoima Sugar an environmental-friendly company, Nduhukire said: "The 22 square miles that we got from Bunyoro Kingdom is not on a forest. We are a green company and there is simply no way we would want to cut down a forest."

Bunyoro Kingdom leased the land to Hoima Sugar to grow sugarcane for 99 years on August 4, 2016, three days after obtaining a land title. However, the National Forestry Authority (NFA) claims the land is part of Bugoma Forest.

On acquiring the lease, NEMA ordered Hoima Sugar to conduct an environmental and social impact assessment before the change of land use from forestry to sugarcane plantation.

However, in its report for the certificate of environment impact assessment, NEMA found 13 square miles, out of the 22 square miles, unfit for sugar plantation. The body says the 13 square miles were in a wetland and forest reserve, which should be conserved.

"Looking at the entire proposal which had been made for sugarcane plantation on the land, we found that there were areas of wetland, natural places, such as a forest, in the entire Bugoma and it is important that we maintain the ecology," Christine Akello, the deputy executive director NEMA, told New Vision on Saturday.

According to Akello, NEMA allowed Hoima Sugar to utilise only land on grassland, measuring nine square miles and leave out the bigger chunk of the land, which is believed to be part of Bugoma Central Forest Reserve.

Akello said upon receiving the proposal from Hoima Sugar, NEMA embarked on consultations with different stakeholders, such as Bunyoro Kingdom and environmentalists, whose input informed the ESIA certificate report.

On Sunday, 19 civil society organisations called a press conference and protested NEMA's decision to give Hoima Sugar part of Bugoma for sugarcane growing. They maintain that the 21.54 square miles that Hoima Sugar is claiming is part of Bugoma Central Forest Reserve.

"NEMA's action violates the laws of Uganda. The certificate should be cancelled," said Dickens Kamugisha, the executive director of the Africa Institute of Environment Governance (AFIEGO).

He said Bugoma has been a controversial issue since 2016 and that this required a public hearing for the public to consent to the giveaway.

He also said NEMA had to advertise in the public newspaper and also give the public and the affected communities 28 days to consult on the ESIA.

"In the era of climate change, which is hitting the population through repeated floods and drought, what will happen when Bugoma is cut down?" wondered David Kureeba, the head of biodiversity under the National Association of Professional Environmentalists.

Constantino Tessarin of the Association for the Conservation of Bugoma Forest said there was no grassland in Bugoma. He said what is called a grassland is part of Bugoma, and that calling it a grassland is a ploy to give it to the destroyers, who want to grow sugarcane.

Gaster Kiyingi, the director of Tree Talk Plus, said any grassland in the forest is part of the ecosystem of a forest. "You cannot use the existence of a grassland to give away Bugoma," Kiyingi said.

He said they would use the law to protest the forest giveaway. Last month, a group of environmentalists petitioned Parliament, seeking its intervention in what they called the pending destruction of Bugoma Central Forest Reserve for a sugarcane plantation.

In 2019, NFA took Hoima Sugar to court, challenging their occupancy of the land. However, court ruled that Hoima Sugar was legally entitled to use the 22 square miles that border Bugoma Forest Reserve.

Gazetted as a forest reserve in 1932, Bugoma is a tropical high forest, which is home to over 600 chimpanzees.

The forest is also home to endangered bird species, the Nahan's Francolin and the African Grey Parrots.

It is a migratory route for wild animals, including elephants connecting Budongo and Murchison to the north and Kibale, as well as Queen Elizabeth to the south. It is also a catchment for rivers that drain into Lake Albert, where oil has been discovered.

Within the oil region, Bugoma is expected to provide a sink for waste gases during oil mining.

The forest is also a rainmaker, supporting thousands of farmers who depend on rain-fed agriculture.